How Gillette innovated and improved its market share in India

This case study looks at how Gillette innovated in India by tailoring advertising and inventing a new product development process to reflect local shaving habits.

Executive Summary: Traditionally, Gillette relied on extensive research and development to create a single product for global distribution. The product was supported by a marketing premise that it would be equally valuable to customers globally. But Gillette set aside its global strategy in India and grew its market share dramatically. This case study looks at how Gillette innovated by tailoring advertising and inventing a new product development process to reflect local shaving habits.

Although Gillette entered the Indian market in 1984 and launched its newest triple-blade system, Mach3 in 2004, sales were flat for a long time. The product did not go through any changes and kept its key features - such as long lasting diamond-like coating blades, 'PowerGlide' smoothness, ergonomic handles, pivoting precision heads - and premium price, which was 10 times more than its two-blade competitors.

Even though the target customers were professional men with higher disposable incomes than the average Indian, the traditional, double-edged razor, could not be dislodged. Indian men do not consider shaving a significant enough activity to justify such a premium. Gillette's Mach3 value proposition was based on extensive consumer research, which highlighted key concerns men had about shaving: it was time-consuming, caused skin irritation and was generally unpleasant. Mach3 promised "the closest shave ever in fewer strokes - with less irritation". Research and development served as the key value network component supporting this value proposition, as it was crucial to deliver the promised performance. Manufacturing, distribution, marketing and advertising were geared for the global introduction through increased production capacity and aligned promotional material.

With such indifference towards shaving, Gillette had to focus on changing the consumer's attitude, leading to some creative marketing campaigns. For example, the launch of the newest Gillette Mach3 in 2009 was supported by the 'Shave India Movement 2009' campaign which included several initiatives. Gillette created the platform 'India Votes... to shave or not' to support this campaign, which asked three controversial questions: Are clean-shaven men more successful? Did the nation prefer clean-shaven celebrities? And the big one: do women prefer clean-shaven men? For two months, various media channels picked up on the campaign and ran interviews, discussions, editorials and news stories, which triggered popular interest. The main purpose was to create a debate around shaving.

The company created the Women Against Lazy Stubble (WALS) association, where women were encouraged to ask their men to shave, capitalising on their role as influencers of men in this aspect. Gillette recruited Bollywood celebrities such as Arjun Rampal and Neha Dhupia to support the campaign. This innovative way of marketing proved to be effective and as awareness grew, sales and market share increased by 38 per cent and 35 per cent respectively.

Until 2010, Gillette India had been following a strategy of marketing cheaper-end US-developed razors. However, low-income Indian customers who could not afford Gillette's premium price relied on the outdated, but traditional, double-edged razor shaving systems. An estimated 400 million customers not happy with existing market offerings provided a promising growth opportunity for Gillette. Thus, it focused on understanding its customers and the challenges they faced, which required spending hours visiting and interviewing consumers in order to understand the role of grooming in their lives and their needs.

The company realised that apart from affordability, customers also valued safety and ease of use. Those customers' needs would not be satisfied by Gillette's existing offering - most lacked running water, had to manage longer facial hair and sit on the floor while shaving. Nor were they satisfied with the existing double-razor solution as they caused frequent cuts.

Once Gillette understood this consumer segment, the company created a new customised product. Gillette Guard, the first product created just for the Indian market, was introduced in October 2010. It was priced at just Rs15 per razor - less than 35 cents and three per cent of the top-ofthe-range Fusion ProGlide price. At Rs5 for a refill cartridge, Gillette Guard met customer expectations on safety and ease of use.

Gillette made several changes to Gillette Guard from the traditional razor systems produced in the developed world. Extra blades were eliminated. Gillette Guard's single-blade system does not follow the trend of increasing the number of blades in a razor made for developed countries. Design complexity was reduced. Gillette Guard is a much simpler design with fewer parts to assemble during the manufacturing process.

Features such as easy-rinse cartridges and lightweight, ribbed handles were designed. Easy-rinse cartridges help customers save water and ensure the blades are clean, even if running water is not available. The new handle has a better grip, making the experience easier and safer. Safety comb and hang hole in the handle was introduced. Designing a safety comb tackles the problem of frequent cuts, especially for men who are not daily shavers and deal with longer hair. The hang hole was introduced as a response to less convenient conditions and to allow for easy drying and storage. 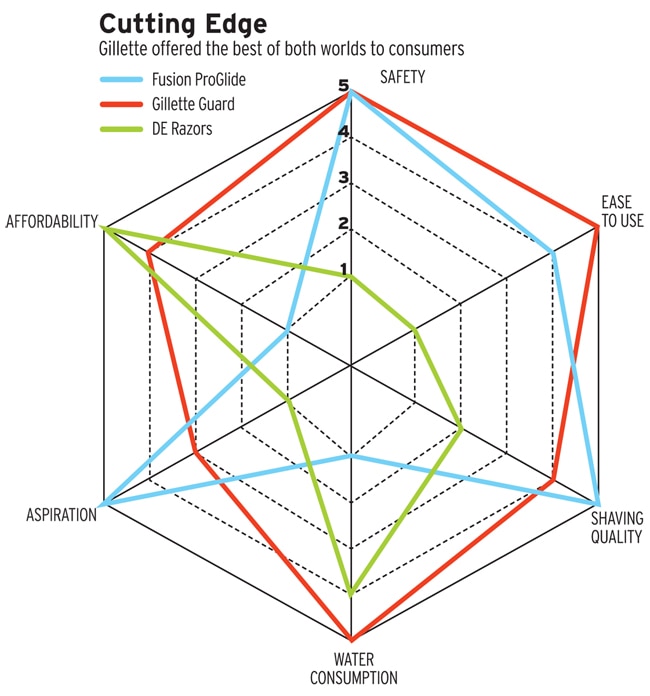 The research and development process was reinvented to come up with the product tailored to target customers' needs. Simplified design means 80 per cent fewer parts are used in production compared to Gillette Vector. This helps cut manufacturing costs to ensure that the low price does not interfere with the business model's sustainability. Apart from research and development, Gillette also built Guard's distribution network across millions of small local shops, where it was more likely to reach its target customers, rather than bigger retail chains. This ensured a wide distribution reach.

Unlike the heavy digital marketing strategies used in the developed world, the campaign for promoting Gillette Guard was based on traditional advertisements featuring Bollywood actors. Additionally, the success of changing Indian men's shaving culture played a significant role in marketing Gillette Guard. As the first product designed for men specifically in this market, Gillette Guard is touted as "one of the most significant product launches in Gillette history".

Gillette's success in India hinged on its capacity to innovate. Firstly, it used innovative ways to communicate with its consumers in 2009 in order to attract a once indifferent segment. Through a creative use of traditional ads and marketing campaigns that supported the launch of the new Gillette Mach3, Gillette was able to change consumers' indifference towards shaving and create a true momentum for its products. In this way, Gillette shifted from a market-driven to a market-driving approach.

Secondly, in 2010, Gillette did something the Harvard Business Review described as "reverse innovation" to develop a product that would satisfy the needs of the lower income customer. After failing to gain significant market share in India by selling its lower and mid-tier American razors in different packaging, Gillette adopted a different approach. It went back to the source by making significant investments in market research to better understand the needs and preferences of target consumers.

Gillette understood that Indian consumers' needs, culture and attitude towards shaving were radically different from those of Western consumers. Rather than lowering performance, Gillette kept the valued customer at the core of its strategy and introduced an innovative value proposition for the value-for-money customer. Moreover, Gillette was able to deliver its promise to customers by putting in place an appropriate value network. In addition to a customised product, all the elements of the business model were coherent with the value proposition and mutually reinforcing.

Local manufacturing enabled Gillette to lower its cost structure and maintain low prices. The distribution model, not based on few large retailers, but on millions of local shops called kiranas, allowed Gillette to achieve a higher market penetration. The Gillette Guard case in India is the typical success story suitable for a marketing strategy book. However, there are some aspects of the strategy that appear to be controversial. One is related to environmental sustainability. Guard uses disposable cartridges which makes it not exactly an environmentally-friendly product.

A mistake that multinationals make is to push global brands in a one-size-fits-all strategy. Gillette's strategy of spending time and resources understanding Indian consumers' needs proved to be the key to its success.

Secondly, Gillette's business model in India shows some weaknesses. Emerging markets such as India are known for producing high volumes of generic products. Given the low barriers to entry in the razor business, there are some doubts about how Gillette will sustain its competitive advantage. Innovative start-ups (e.g. DollarShaveClub) are growing fast in the US by selling simple twoblade razors online at a fraction of Gillette's price. A lower price is made possible by a simple product design and limited marketing and overhead costs. It is possible a low-cost competitor will enter the Indian market, challenging Gillette's market share.

To remain competitive, Gillette must keep the valued customer at the core of its strategy and adapt its business model accordingly.

Other companies can learn from Gillette's case in India. A recurrent mistake that multinationals make is to push global brands in a one-sizefits-all strategy. Gillette's strategy of spending time and resources understanding Indian consumers' needs proved to be the key to its success. This understanding helped it innovate through developing new products and creative communication ways to attract and engage Indian consumers.