This case study analyses how IKEA adapted its strategies to become profitable in China. It also assesses some lessons the company learnt in China that might be useful in India, where it plans to open its first store by 2014 and 25 stores in 10 to 15 years.

Executive Summary: IKEA is known globally for its low prices and innovatively designed furniture. In China, however, it faced peculiar problems. Its low-price strategy created confusion among aspirational Chinese consumers while local competitors copied its designs. This case study analyses how IKEA adapted its strategies to expand and become profitable in China. It also assesses some lessons the company learnt in China that might be useful in India, where it plans to open its first store by 2014 and 25 stores in 10 to 15 years.

Swedish furniture giant IKEA was founded by entrepreneur Ingvar Kamprad in 1943. He began by selling pens, wallets and watches by going door to door to his customers. When he started selling his low-priced furniture, his rivals did everything to stop him. Local suppliers were banned from providing raw material and furniture to IKEA, and the company was not allowed to showcase its furniture in industry exhibitions. What did IKEA do? It innovated to stay in business. It learnt how to design its own furniture, bought raw material from suppliers in Poland, and created its own exhibitions. Today, IKEA is the world's largest furniture retail chain and has more than 300 stores globally.

In 1998, IKEA started its retail operations in China. To meet local laws, it formed a joint venture. The venture served as a good platform to test the market, understand local needs, and adapt its strategies accordingly. It understood early on that Chinese apartments were small and customers required functional, modular solutions. The company made slight modifications to its furniture to meet local needs. The store layouts reflected the typical sizes of apartments and also included a balcony.

IKEA had faced similar problems previously when it entered the United States. The company initially tried to replicate its existing business model and products in the US. But it had to customize its products based on local needs. American customers, for instance, demanded bigger beds and bigger closets. IKEA had to make a number of changes to its marketing strategy in the US. The challenges it faced in China, however, were far bigger than the ones in the US.

As the company opened more stores from Beijing to Shanghai, the company's revenue grew rapidly. In 2004, for instance, its China revenue jumped 40 per cent from the year before. But there was a problem - its local stores were not profitable. 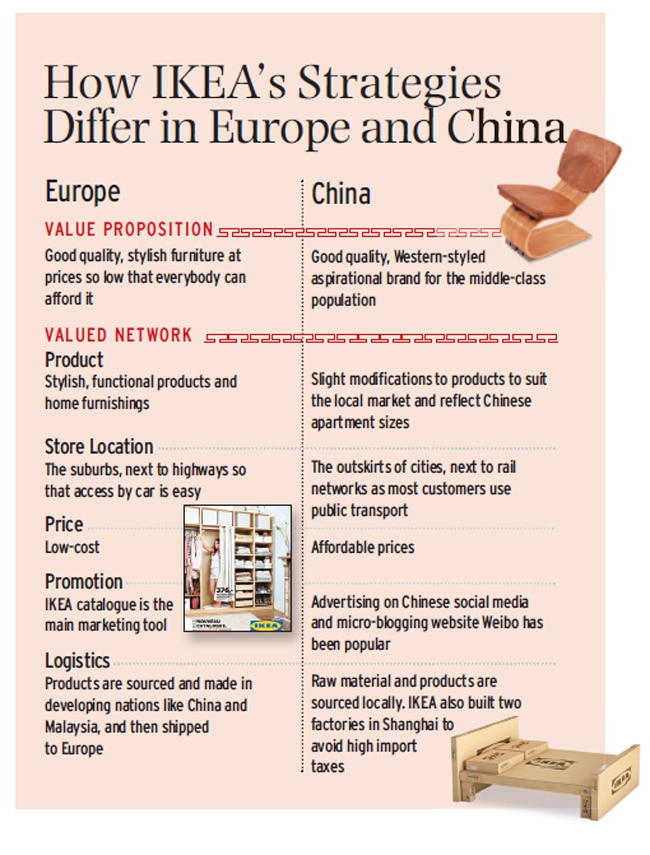 IKEA identified the strategic challenges and made attempts to overcome them. One of the main problems for IKEA was that its prices, considered low in Europe and North America, were higher than the average in China. Prices of furniture made by local stores were lower as they had access to cheaper labour and raw materials, and because their design costs were usually nil.

IKEA built a number of factories in China and increased local sourcing of materials. While globally 30 per cent of IKEA's range comes from China, about 65 per cent of the volume sales in the country come from local sourcing. These local factories resolved the problem of high import taxes in China. The company also started performing local quality inspections closer to manufacturing to save on repair costs.

Since 2000, IKEA has cut its prices by more than 60 per cent. For instance, the price of its "Lack" table has dropped to 39 yuan (less than five euros at current exchange rates) from 120 yuan when IKEA first came to the Chinese market. The company plans to reduce prices further, helped by mass production and trimming supply chain costs.

High prices were one of the biggest barriers in China for people to purchase IKEA products. IKEA's global branding that promises low prices did not work in China also because western products are seen as aspirational in Asian markets. In this regard, IKEA's low-price strategy seemed to create confusion among Chinese consumers.

The main problem for IKEA was that its prices, considered low in Europe and the US, were higher than the average in China
The company realised this and started targeting the young middle-class population. This category of customers has relatively higher incomes, is better educated and is more aware of western styles. Targeting this segment helped IKEA project itself as an aspirational western brand. This was a massive change in strategy, as IKEA was targeting the mass market in other parts of the world.

IKEA also had to tweak its marketing strategy. In most markets, the company uses its product catalogue as a major marketing tool. In China, however, the catalogue provided opportunities for competitors to imitate the company's products. Indeed, local competitors copied IKEA's designs and then offered similar products at lower prices. IKEA decided not to react, as it realised Chinese laws were not strong enough to deter such activities. Instead, the company is using Chinese social media and micro-blogging website Weibo to target the urban youth.

IKEA also adjusted its store location strategy. In Europe and the US, where most customers use personal vehicles, IKEA stores are usually located in the suburbs. In China, however, most customers use public transportation. So the company set up its outlets on the outskirts of cities which are connected by rail and metro networks.

The China expansion came at a cost. Since 1999, IKEA has been working on becoming more eco-friendly. It has been charging for plastic bags, asking suppliers for green products, and increasing the use of renewable energy in its stores. All this proved difficult to implement in China. Price-sensitive Chinese consumers seem to be annoyed when asked to pay extra for plastic bags and they did not want to bring their own shopping bags. Also, a majority of suppliers in China did not have the necessary technologies to provide green products that met IKEA's standards. Helping them adopt new technologies meant higher cost, which would hurt business. IKEA decided to stick with low prices to remain in business.

As IKEA prepares to enter India, its China experiences will come in handy. It understood that in emerging markets, global brands may not replicate their success using a low-price strategy. There always will be local manufacturers who will have a lower cost structure.

Chinese competitors copied IKEA's designs from its catalogue and then offered similar products at lower prices
It is more important what customers think about the company rather than the other way around.

IKEA wanted to be known as a low-price provider of durable furniture, while Chinese consumers looked at IKEA as an aspirational brand. It is likely that Indian consumers will also look at IKEA in a similar way.

The company also learnt that emerging economies are not ready for environment-friendly practices, especially if they result in higher prices.

IKEA, famous for its flat-pack furniture which consumers have to assemble themselves, realised that understanding the local culture is important - Chinese people hate the do-it-yourself concept and Indians likely do so even more.

IKEA may face some India-specific challenges such as varying laws in different states ruled by different political parties. This could make its operations, especially distribution and logistics, a bit challenging. IKEA already has had to wait a long time to get permission to open stores in India. The delay in policy-making at the state level could be even longer.

Indian customer preferences and economic environment are similar to the Chinese market.

IKEA will likely have hopes of attracting India's urban middle-class buyers who are keen on decorating their homes with stylish international brands. The company has learnt that doing business in emerging markets is a different ball game for a multinational company. IKEA did well to adapt in China, although it took numerous changes to its strategies and more than 12 years for the company to become profitable in the Asian nation.