How Kraft Foods made Oreo a global brand

For most of its 100-year existence, Oreo was America's best loved cookie. Faced with stagnation in the domestic market, Kraft Foods moved it into emerging markets where it made some mistakes, learnt from them and ultimately triumphed.

Executive Summary: For most of its 100-year existence, Oreo was America's best loved cookie, but today it is a global brand. Faced with stagnation in the domestic market, Kraft Foods moved it into emerging markets where it made some mistakes, learnt from them and ultimately triumphed. This case study looks at the strategies used to win over customers in China and India.

On March 6, 2012, the famous cookie brand, Oreo, celebrated its 100th birthday. From humble beginnings in a Nabisco bakery in New York City, Oreo has grown to become the bestselling cookie brand of the 21st century generating $1.5 billion in global annual revenues. Currently owned by Kraft Foods Inc, Oreo is one of the company's dozen billiondollar brands.

Until the mid-1990s, Oreo largely focused on the US market - as reflected in one of its popular advertising slogans from the 1980s, "America's Best Loved Cookie". But the dominant position in the US limited growth opportunities and spurred Kraft to turn to international markets. With China and India representing possibly the jewels in the crown of international target markets due to their sheer size, Oreo was launched in China in 1996.

The China launch was based on the implicit assumption that what made it successful in its home market would be a winning formula in any other market. However, after almost a decade in China, Oreo cookies were not a hit as anticipated, according to Lorna Davis, in charge of the global biscuit division at Kraft. And the team even considered pulling Oreo out of the Chinese market altogether. In 2005, Kraft decided to research the Chinese market to understand why the Oreo cookie that was so successful in most countries had failed to resonate with the Chinese. Research showed the Chinese were not historically big cookie eaters.

Without the emotional attachment of American consumers who grew up with the cookie, the taste and shape could be quite alien. In addition, 72 cents for a pack of 14 Oreos was too expensive for the value-conscious Chinese.

Kraft's Chinese division used this information to formulate a modified recipe, making the cookie more chocolatey and the cream less cloying. Kraft developed 20 prototypes of reduced-sugar Oreos and tested them with Chinese consumers before arriving at a formula that tasted right. They also introduced different packages, including smaller packets for just 29 cents to cater to Chinese buying habits.

The changes had a positive impact on sales and prompted the company to ask some basic questions challenging the core attributes of the traditional Oreo cookie. Why does an Oreo have to be black and white? And why should an Oreo be round? This line of questioning and an ambition to capture a greater share of the Chinese biscuit market led Kraft to remake the product in 2006 and introduce an Oreo that looked almost nothing like the original. The new Chinese Oreo consisted of four layers of crispy wafers filled with vanilla and chocolate cream, coated in chocolate. The local innovations continued and Oreo products in China today include Oreo green tea ice cream and Oreo Double-Fruit.

Another challenge for Kraft in China was introducing the typical twist, lick and dunk ritual used by American consumers to enjoy their Oreos. Americans traditionally twist open their Oreo cookies, lick the cream inside and then dunk it in milk. Such behaviour was considered a "strangely American habit", according to Davis. But the team noticed China's growing thirst for milk which Kraft tapped with a grassroots marketing campaign to tell Chinese consumers about the American tradition of pairing milk with cookies. A product tailored for the Chinese market and a campaign to market the American style of pairing Oreos with milk paid off and Oreos became the bestselling cookies of that country.

The lessons from the Chinese market have shaped the way Kraft has approached Oreo's launch in India. Oreo entered India through the import route and was initially priced at Rs 50 (about $1) for a pack of 14. But sales were insignificant partly because of limited availability and awareness, but also because they were prohibitively expensive for the value-conscious Indian masses.

Learning from the Chinese success story, the company under global CEO Irene Rosenfeld took localisation strategies seriously from 2007 onwards. The $19.1-billion acquisition of Cadbury in 2009 provided Kraft the local foothold it needed in India.

Unlike the Chinese, Indians love their biscuits. Nielsen says India is the world's biggest market for biscuits with a market share of 22 per cent in volumes compared with 13 per cent in the US. While the lion's share of this market is for low-cost glucose biscuits led by Parle-G, premium creams account for a substantial chunk valued at around Rs 5,500 crore ($1.1 billion). The way to the Indian consumer's stomach is through competitive pricing, high volumes and strong distribution, especially in rural areas. 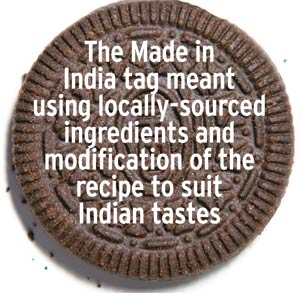 Oreo developed a launch strategy around taking on existing market leaders in the cream segment - Britannia, Parle and ITC. Internally, they even have an acronym for this strategy - TLD (Take Leaders Down).

The focus was to target the top 10 million households which account for 70 per cent of cream biscuit consumption. Oreo launched in India in March 2011. It entered the market as Cadbury Oreos because Cadbury is a stronger brand name than Kraft, and initially focused on generating awareness and rapid trials. The product was sweetened to suit the Indian palate and Kraft exploited Cadbury's network of 1.2 million stores.

The Made in India tag meant using locally-sourced ingredients, modification of the recipe to suit Indian tastes and possibly cheaper ingredients, a smaller size and competitive prices. Oreo launched its traditional chocolate cookie with vanilla cream at Rs 5 for a pack of three to drive impulse purchases and trials, Rs 10 for a pack of seven and Rs 20 for a pack of 14 for heavy usage. The cookie looks the same as its international counterpart with a motif of 12 florets and 12 dashes.

The company maintained the heritage of the bitter chocolate cookie with sweet vanilla cream to stand out from me-too products and meet customer expectations of having the real thing. Kraft initially chose to outsource its manufacturing for the Indian market instead of using Cadbury factories.

Communication and advertising have been consistent across the world as the core customer remains the same. The company focused on using the togetherness concept to sell Oreos in India, with television forming the main medium of communication although other media are also being tapped. Oreo India's Facebook page is one of the fastest growing in the world. The company also went on a bus tour to push the concept of togetherness among families across nine cities and it used a smaller vehicle for a similar campaign across 450 small towns. Oreo is driving point-ofpurchase sales with store displays and in-store promotions in a bid to overtake market leader Britannia Good Day's distribution.

With a strategy focused on rapid brand awareness and extensive distribution, the Oreo India launch story has been a success so far. Its market share has grown from a little over one per cent after its debut to a massive 30 per cent of the cream biscuit market. As awareness of the Oreo brand grows in India, Kraft is looking to shift from the Cadbury distribution network to a wider wholesale channel. It is also eyeing kirana stores and small towns apart from modern stores in big cities.

Today, Oreo is more than just an American brand. It is present in more than 100 countries, with China occupying the No. 2 slot. Seven years ago, this was highly improbable.

What can we learn from Kraft Food's experiences in India and China? Write to btcasestudies@intoday.com or post your comments at www. businesstoday.in/casestudy-oreo. Your views will be published in our online edition. The best response will win a copy of Marketing as Strategy by Nirmalya Kumar. Previous case studies are at www.businesstoday.in/casestudy.