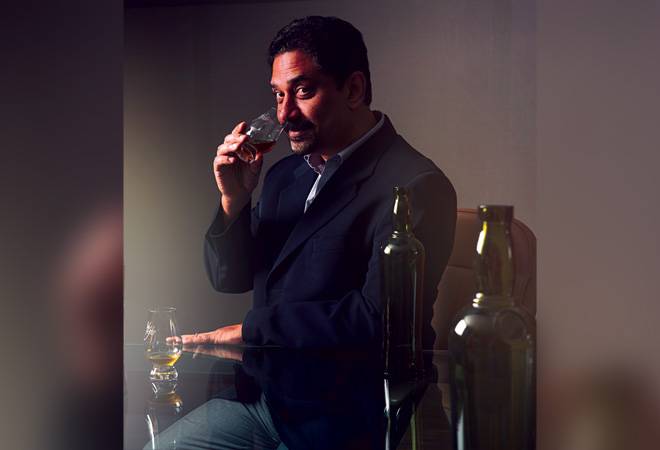 Whiskey maker John Distilleries' corporate headquarters in Bengaluru has one of the more gorgeous views of the city's central business district. In the corner of a 10th floor room, which has a view of the metro line that cuts across MG Road and East Parade Church, Heemanshu Ashar, Head of Marketing, takes this writer through quick tasting of the company's single malts.

There is "Paul John Brilliance", "Paul John Edited" and "Paul John Bold". Brilliance is an unpeated whiskey while Bold is peated. Edited falls somewhere in between.

"The world is divided between peats (smokier whiskeys) and unpeats. There are smoke heads who will only take peated whiskey. Edited, meanwhile, doesn't overpower. We call it the 'kiss of peat,' " Ashar, who has grown a salt and pepper horseshoe moustache, explains.

Peat is a dead mass of vegetation formed and compressed thousands of years back and is mostly available in places such as Scotland where winters are good. Like coal, it can be a source of heat. When damp barley is dried over peat fire, the grain takes on a smokey aroma. The resulting whiskey, thereby, is smokey as well. "Our house style is vanilla, a bit of citrus, nuts," Ashar continues. "The unpeated whiskeys are aged in our underground cellars. They are not temperature-controlled. What you get is the tropical-ness of the environment."

John Distilleries' single malts are tropical as they are Indian. They mimic the style of whiskey from different single malt regions of Scotland. "Brilliance is Highland and Speyside style; Edited is Highland and Cambell Town; Bold is Islay. They are different regions in Scotland, but all our expressions come from one place - Goa," says Ashar. The sunny shores of Goa are a beer haven. Turns out, the place can produce luxury whiskeys, too. This is where John Distilleries' distillery is.

In popular folklore, the more exquisite single malts come from two-three countries. There is Scotland, of course, but Japan has swiftly risen in reputation. So has Taiwan. Surprise, Paul John's single malts are among the top rated in the world; so are Amrut's, a Bengaluru-based distillery that was the first to change the game for India, known for producing cheap liquor.

In whiskeys, India mostly makes and consumes blended whiskey. These are whiskeys that are produced in different distilleries and blended. Single malts, on the other hand, are for connoisseurs. They are more luxurious and can cost up to Rs 1 lakh. According to Ian Millar, Global Brand Ambassador of Glenfiddich, a single malt is whiskey made from malted barley at a single distillery, aged for at least three years in either American or European oak casks, and bottled at a minimum 40 per cent alcohol by volume. "You'd be amazed at the number of people who think single malt means "single cask". Actually, it can be the produce of one cask, but more often than not, it's the produce of a selection of casks," Millar notes on the brand's website.

every luxury category needs a guru - the guide whose words can change a company's destiny. Whiskey has Jim Murray, an English critic who brings out the Whiskey Bible every year. For the 2018 edition, he tasted 4,600 whiskies and rated them on parameters such as Nose (the aroma), Taste (flavour profile), Finish (effects of ageing) and Balance (is it too one-sided?). Each whiskey is given a rating out of 100. A score of something like 51-64.5 is "nasty and means the whiskey is well worth avoiding" while 94-97.5 ones are "superstar whiskies that give us all a reason to live"; 98-100 is for "better than anything I've ever tasted!". In 2018, he awarded John Distilleries' single malt Paul John Kanya "Asian Whiskey of the Year". It got a score of 96, so did the three other variants of the company. The single malt Edited has a score of 96.5.

Amrut's single malts rank equally high. The brand's Fusion has a score of 97. In fact, the turning point for Indian single malts had come with Fusion, which, in 2010, was recognised by Murray as the world's third-finest whiskey, after Sazerac Rye 18 Years Old (American) and Ardbeg Supernova (Scottish).

Amrut launched its first single malt in 2004, in Glasgow. It was an effort in reverse marketing. The idea was to get the drink recognised in the United Kingdom before bringing it to India. Indians were then hooked to Scottish single malts. However, until about 2010, Amrut had limited success in international markets. "It was an uphill task. Our quality was good but the moment people at international exhibitions saw that it was an Indian stall, we did not get the reception," remembers Rakshit N. Jagdale, Managing Director of Amrut Distilleries. "Our marketing strategy was to invite people, pour them a drink and not reveal where the drink was from. People first tasted it. The label was revealed when they liked it. Blind tasting in exhibitions subsequently helped us," he adds. After Murray rated Fusion the third best in the world, things changed dramatically. "That is when we started getting a lot of enquires from Indian consumers. The award opened up the space for Indian single malts. People realised Indians can also make good whiskeys," says Thrivikram G. Nikam, Joint Managing Director of Amrut Distilleries. Around 2009, Amrut was selling between 5,000 and 6,000 cases (one case has 12 bottles) globally. They had six variants or "expressions". Now, the company sells 35,000 cases and has 25 "expressions". Some Indian single malts are pricier than their foreign counterparts. Amrut Greedy Angels, India's most aged whiskey with 8/10/12-year variations, costs between Rs 90,000 and Rs 1 lakh a bottle. John Distilleries' Paul John Mars Orbiter, a special edition single malt, sells for Rs 35,000.

Nevertheless, the Indian market continues to remain small for single malts. "We sold about 20,000 cases in India last year. The entire India market, including international brands, is not more than 200,000-250,000 cases," says Paul John, Chairman of John Distilleries.

John Distilleries was established in 1992. It launched its first single malt nearly a decade after Amrut, in 2012. The strategy was the same - launch it in the United Kingdom before India. "We wanted to launch in the UK, because we wanted to prove that our quality is second to none. The UK was the heart of single malt manufacturing and had matured drinkers. So, we waited, won a lot of international awards, and then launched in India in 2013," says John.

John Distilleries has won over 200 international awards. "We have done well but are just beginning. There are limited ways in which you can market alcohol (in India). It is hampering the go-to-market speed," he says.

the best part about the liquor industry is perhaps its optimism. Nearly every executive you speak to is high on growth stories.

The domestic market for this luxury drink could be small, but Indian liquor companies think premiumisation is the key to survival and profitability. Three more companies, apart from Amrut and Paul John, have come up with single malts recently. There is Radico Khaitan, Mohan Meakin and the Khoday Group. A few of them describe their produce as "iconic" even though they are just about a year-old.

Radico Khaitan, in fact, came up with a press release in March to stress it is doing well: "Rampur from the house of Radico Khaitan has received an overwhelming response from single malt whiskey consumers of the country. After earning huge international acclaim, the brand sold 50 per cent of the placed stock within four weeks of its entry into the domestic market." Satpal Chaudhry, Chief Operating Officer at Khoday India, says the company's management decided to produce single malt in 2008. The bottling started in 2018. "It is a 10-year journey. Swamy Khoday, who is the executive director, was asked by his elder brother before his death to bring out the best single malt in India. I can now say we have the most wonderful single malt whiskey in India," he says. Khoday has two variations as of now. Peter Scot Single Malt Black, which is sold in India, and Khoday Single Malt Black Whiskey, which will be launched in Canada, the US, Australia, and Dubai.

the older players, meanwhile, are ageing like wine. Both Amrut and Paul John have been dishing out innovative and luxurious single malts nearly every year. You only have to type #AmrutFever on Twitter to figure out what's going on - Amrut's fans span from Sweden to Toronto. What keeps the company ahead? "Since this is a family-owned company, there is a lot of scope for innovation," says Rakshit Jagdale, Managing Director of Amrut Distilleries.

Amrut Distilleries was established in 1948 by Rakshit's grandfather, Radhakrishna Jagdale, as a blending and bottling unit. In the early 1950s, the company started distilling rum and by 1972, it had started distilling grape brandy. The distillation of malt whiskey began in 1979.

Ask Jagdale about some of his most luxurious liquids and he cites Amrut Spectrum, a special edition single malt. Whiskeys are usually matured in one wood barrel and then transferred to another barrel for the "finish". However, in a first, his distillery made a cask of multiple wood planks - planks were used from the oak of America, France, Spain, as well as sherry.

"Whiskey was matured in contact with multiple wood simultaneously. This was launched in 2015, in international markets," says Jagdale. Spectrum's alcohol strength was 50 per cent and it retailed for about $150 a bottle.

There is also the Amrut Herald that was bottled in an island that hardly trades. Heligoland is a small archipelago off the German coast. Amrut, however, shipped whiskey barrels to the island and had it hand bottled, invoiced and shipped back to mainland Europe. "The liquid was classic single malt. It was aged for 6.5 years. Climatic conditions influence whiskey. Maturing in different altitudes and places was the experiment here," says Jagdale.

Paul John Mars Orbiter was John Distilleries' tribute to India making "her mark on the space frontier". The tipple "proffers intense and dramatic aromas of peat tinged with orange peel and sweet barley". The distillery also produces a special "Christmas Edition". The 2018 edition was matured in ex-bourbon (the cask previously held bourbon whiskey) and finished in Ollorosso (a Spanish sherry) cask for a shorter period. "It has a little bit of peat. It is like taking a bite off a lovely Christmas cake," says John Distilleries' Heemanshu Ashar.

For luxe Indian whiskey makers, the world is their cake. They want to grab more of it.