Leading market experts have already lowered their expectations from the stock market this year, and while they believe that the bulk of the correction is behind us, they are not yet ready to paint a rosy outlook

If data is anything to go by, there are strong headwinds in the stock markets that also explain the tumultuous movement of Indian equity benchmarks

“In the long run, we are all dead.” The author of this widely quoted sentence is celebrated 20th century economist John Maynard Keynes, who is often referred to as the father of macroeconomics—the branch of economics that deals with interest rates, government spending and taxes to manage an economy’s growth. The sentence is also perhaps best suited to reflect the current mood of the stock markets, wherein everyone, as always, is bullish on the long-term India growth story. But, there is a wide consensus among market participants on the near-term concerns related to interest rates, inflation and economic growth.

If data is anything to go by, there are strong headwinds in the stock markets that also explain the tumultuous movement of Indian equity benchmarks that were, till recently, down over 18 per cent when compared to the all-time highs the indices touched last year.

A further 2 per cent fall, and the Sensex and Nifty would technically be in ‘bear market’ territory that is typically marked by long bouts of range-bound movement. The Nasdaq in the US is currently in a bear market zone, having dived nearly 29 per cent from the 52-week high of 16,212 it hit on November 22, 2021. 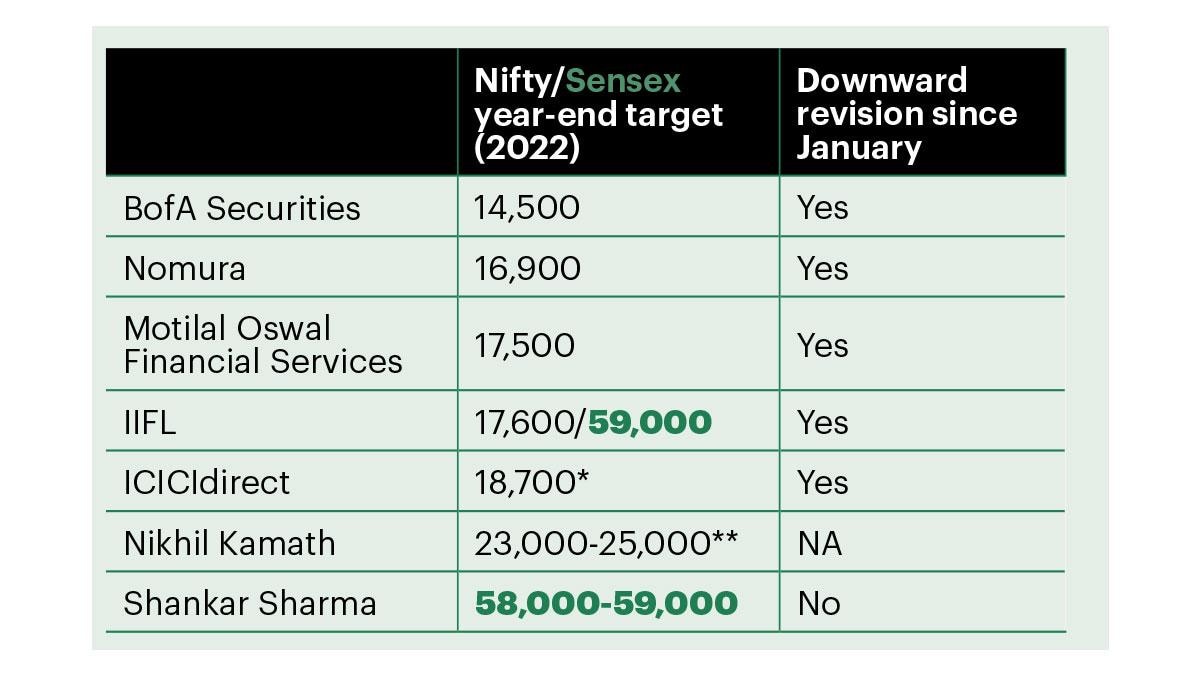 BT reached out to some prominent and widely regarded stock market participants—ranging from foreign and domestic broking firms to individual experts and mutual funds—to understand their outlook on the markets. The consensus among them seems to be that the markets will be higher than the current levels by the end of 2022, but it comes with a word of caution, and the complete absence of a bullish undertone.

While there are the usual concerns around foreign outflows and earnings downgrades, the single-biggest headwind currently perceived is regarding inflation, and its effects on economic growth. According to experts, some other concerns are commodity prices, geopolitical issues, recessionary pressures in the US and Europe, and the intermittent negative news flow related to Covid-19, coming especially from China.

The current end-2022 Sensex or Nifty target of most experts is lower than what they had forecasted at the start of the year. Nomura, for instance, now has a Nifty target of 16,900, down from its earlier target of 18,150. Similarly, BofA Securities has lowered its Nifty target from 19,100 to 14,500. The markets may fall further than what experts are forecasting in the backdrop of such material macro uncertainty, is how Saion Mukherjee, MD & Head of Equity Research, India, at Nomura Capital, describes the current situation.“As base case, we are not expecting any material disruption in India. Bank balance sheets and corporate balance sheets are in good shape. This gives support to the market, and makes the case against a very steep fall. The risk is if India’s medium-term growth expectations come down materially,” he adds. 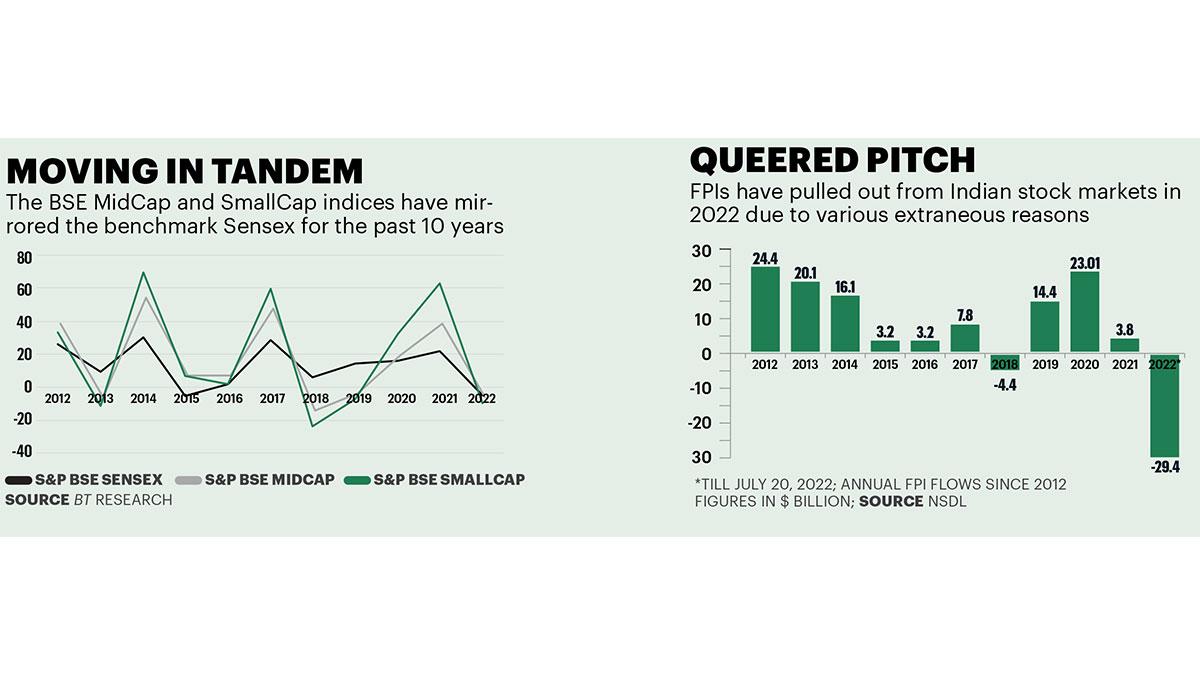 Along similar lines, Amish Shah, Head of India Research at BofA Securities, says he continues to remain cautious on the markets in the near-term as “most risks are skewed to the downside”. He lists global macro concerns including the rising risk of a recession in the US; the potential for crude oil to sustain at higher levels with the risk of a spike to $150 a barrel, if European sanctions limit Russian production; and the likely earnings miss by corporates in FY23, given the lofty estimates of over 20 per cent by D-Street, as prominent risk factors.

AN EYE ON INFLATION

Every expert BT spoke to has identified inflation in the domestic and global arena as a major concern when asked to list the top headwinds facing the Indian stock markets. “The biggest concerns for the markets are currently emerging from the very high inflation in the US economy that is forcing the US [Fed] to significantly hike rates,” says Samir Arora, Founder of Singapore-based fund Helios Capital. “This creates its own problems as the US currency appreciates against other currencies like the euro, yen, sterling, and indeed the Indian rupee. Weakness in currency and other associated risks are making foreign investors sell Indian (and Asian emerging market) stocks in record amounts.”

In the US, inflation touched 9.1 per cent in June, the highest since November 1981. The UK is also witnessing its highest ever inflation in 40 years at 9.4 per cent in June. Japan’s core consumer inflation has stayed above its central bank’s 2 per cent target for the third consecutive month in June. In Germany, inflation hit 8.2 per cent in the same month, even as its central bank expects a further spike in September. Incidentally, nearly half of the 19 countries in the Eurozone are now facing double-digit annual inflation with the overall rate at the highest point since 1999, when the group was created.

Meanwhile, inflation in India eased slightly to 7.01 per cent in June from 7.04 per cent in the previous month, but it has stayed above the Reserve Bank of India’s upper limit of six per cent for six consecutive months now.

Simply put, central banks globally hike rates to rein in inflation, and that in turn affects the flows into the stock markets, especially from FPIs, in emerging markets, including India. Hence, it does not come as a surprise that FPIs have pulled out a record $28.6 billion in the current calendar year (till July 27). More importantly, overseas investors have been net sellers for nine consecutive months starting October 2021, and have sold shares worth a cumulative $33.6 billion till June.

Experts appear divided on the outlook for foreign flows, but all agree that it depends on how central banks act in the coming months. Nikhil Kamath, Co-founder of stockbroking firm Zerodha, believes that FPIs have been reallocating capital amidst a rise in global interest rates, and this will continue till further rate increases happen in the global markets. Sanjay Mookim, Strategist and India Head of Research at JPMorgan, says an immediate reversal of the trend in FPI flows looks difficult. “The US Fed is raising rates while the Indian economy is slowing. Unless oil prices ease meaningfully, it will be difficult for flows to return,” he says. Interestingly, the current month has seen a slight slowing of sorts as FPIs have been net sellers at a modest $179 million till July 27. But according to market participants, it is too early to call it a trend.

“We have already seen a reduction in the pace of selling in the last few days. In recent months, FPIs were net sellers to the tune of around Rs 2,500 crore a day, which has come down to around Rs 1,000 crore a day in the last 10 days... We expect FPIs to be net buyers in the days to come when the global uncertainties settle down,” says domestic broking firm IIFL.

Siddhartha Khemka, VP and Head of Retail Research at Motilal Oswal Financial Services, expects FPI selling to reverse around September this year “once the full impact of inflation plays out on corporate earnings”.

“By that time, the performance of the monsoon and its impact would be known to the market. H2FY23 also marks the start of the festive season, which could bring demand back and revive the economy. Inflation might also peak out by that time while central banks might get over with the aggressive rate hike cycle. All these factors can lead to FPI flows returning,” he adds.

More importantly, experts believe that domestic institutional investors or DIIs—that include mutual funds, insurance companies, banks and financial institutions—would continue pouring huge amounts of money into stocks, and support the markets like they have been doing for the past several months. “I expect domestic liquidity to be very strong,” says Shankar Sharma of First Global while adding that the worst seems to be over for India. Citing the headroom available, he says that there is an overall return potential of 15 per cent per annum for the Indian market.

Irrespective of the state of the markets, experts always have a set of sectors that they believe are safe bets from a long-term investment horizon. Rakesh Arora, Managing Partner at Go India Advisors, says that investors should focus on domestic oriented sectors like cement, industrials, and banks while staying away from global sectors like metals and IT, among others. “It will be best to stick to large-caps, and debt-free mid-caps,” he says.

For First Global’s Sharma, renewable energy and small-sized FMCG companies are the safe bets, though he believes that large-caps will disappoint. “The main area of focus has to be small-caps. I see Indian small-caps being the best equities in the world,” he adds.

Zerodha’s Kamath advises investors to stay away from growth stocks and IPOs, even as he is bullish on banking. Interestingly, ICICI Prudential Mutual Fund also believes that investors should avoid platform-based businesses and chemical businesses owing to valuations. For Pankaj Pandey, Head of Research at ICICIdirect, the sectors that could do well include banks, automobiles, capital goods & power, and retail & hospitality. BofA Securities prefers a defensive strategy, and is overweight on the energy sector due to high energy prices along with sectors such as staples, healthcare, and utilities.

IS THE WORST BEHIND US?

“I think the worst is over for India,” says Sharma, though he believes that a worst-case scenario could see a further 10 per cent fall in the benchmarks. While the benchmark Sensex was up nearly 5.3 per cent in the current month till July 27, it has come on the back of three successive months of fall that saw the index drop over 5,500 points, or nearly 9.5 per cent. The Nifty, meanwhile, is currently down over 10 per cent when compared to its record high of 18,604.45 touched in October 2021 but experts believe it is too early to conclude that the market has bottomed out.

Arora believes that the Nifty could bottom out between 14,500 and 15,000, whereas Nomura’s Mukherjee pegs the bottom at around 14,500 by assigning a 16 times multiple to FY24 consensus earnings, and assuming 5 per cent lower-than-projected earnings. IIFL expects the Nifty to trade in the range of 14,800 to 16,800 during the next few months, adding that “it is too early to call it a bottom with a medium-term perspective”.

Kamath is of the view that India is in a “structural long-term bull run,” though the current downswing could easily last a few quarters, and a fall between 5-10 per cent is possible. “The sentiment around Indian equity markets has deteriorated significantly… It is quite possible for the Indian market to fall further along with weaker global equities,” says Mookim of JPMorgan.

Perhaps nothing sums up the investors’ mood better than the latest edition of the Bank of America Global Fund Manager Survey that was conducted in July. “Dire level of investor pessimism… expectations for global growth and profits are at all-time lows; cash levels are highest since 9/11; equity allocation is at the lowest since Lehman... global growth expectations have slumped to net -79 per cent, an all-time low; and recession anticipation is at the highest since May 2020,” the report states.

Most investors do not like to see the market fall but it appears that there is an unpleasant consensus when it comes to the near-term outlook. In the long term, as Keynes said, all are anyway dead.