How Domestic Investors are Fuelling the Resilience in India’s Markets

Foreign investors were always looked upon as the prime drivers of any rally in the Indian stock markets. But the current resilience is only on the back of domestic institutional investors and also the average retail investor. What has changed?

Many businesses in India have aligned themselves with the idea of Aatmanirbhar Bharat or self-reliant India. Now, it is the turn of the stock markets. How can they be self-reliant? By not depending on foreign investors to drive a rally or a bull run. And the markets are well on their way. Let us consider some hard numbers. The overall stake of mutual funds (MFs) in the universe of companies listed on the National Stock Exchange (NSE) moved up for the third straight quarter in December 2021 to touch 7.4 per cent. If one takes into account only the elite Nifty 50 universe, then the stake inched up to 8.5 per cent—the highest level in two decades. Individual retail investors have also upped their overall stake in the Nifty 50 companies to 8.3 per cent, and 9.7 per cent in the complete NSE universe—the highest in nearly 14 years.

Meanwhile, the stake of foreign portfolio investors (FPIs)—often looked at as the primary driver of bull runs and rallies in Indian stock markets—has consistently fallen over the past few quarters with the December quarter witnessing a fall of 81 basis points (bps) to 19.7 per cent in NSE-listed companies. Among the top 500 listed firms, FPIs’ stake fell by 65 bps to 20.9 per cent. This was the fourth consecutive quarter that saw a dip in the stake held by foreign investors—now at its lowest level in nine years. In terms of net flows, 2022 has seen FPIs make net sales of nearly $17 billion till May 2. And they have been net sellers since October 2021.

While the global stock markets and the pack of emerging markets have seen heightened volatility with a clear downward bias—on the back of a mix of macroeconomic and geopolitical concerns (with foreign investors offloading shares in huge quantities across markets)—the Indian markets have stayed resilient. Analysing the data reveals that this resilience is ‘Made in India’, with domestic financial institutions and retail investors emerging as a strong counterforce to foreign investors.

Let’s examine this strong counterforce. First up are MFs, which have registered record flows through systematic investment plans (SIPs). According to industry body Association of Mutual Funds in India (AMFI), SIP contributions touched a record `12,328 crore in March. On an overall basis, MFs have seen net inflows in eight of the past 12 months with cumulative net flows during the period pegged at nearly `2.47 lakh crore, AMFI data says. Further, BSE data shows that domestic institutional investors—which primarily comprise banks, MFs and insurance companies—have net bought a cumulative `2.58 lakh crore in the past 14 months. Retail individual investors have also done their bit. As per NSE, since January 2021, every month has seen the addition of more than a million investors.

The rising force of domestic investors is also being talked about by policymakers. Recently, while announcing the mega initial public offering of Life Insurance Corporation of India, Tuhin Kanta Pandey, Secretary, Department of Investment and Public Asset Management, said that even as there are concerns in the markets and global sentiments are weak, Indian stock markets are benefitting immensely from domestic flows. “The fact is that while FPIs have withdrawn, domestic investors have filled in,” he had said. 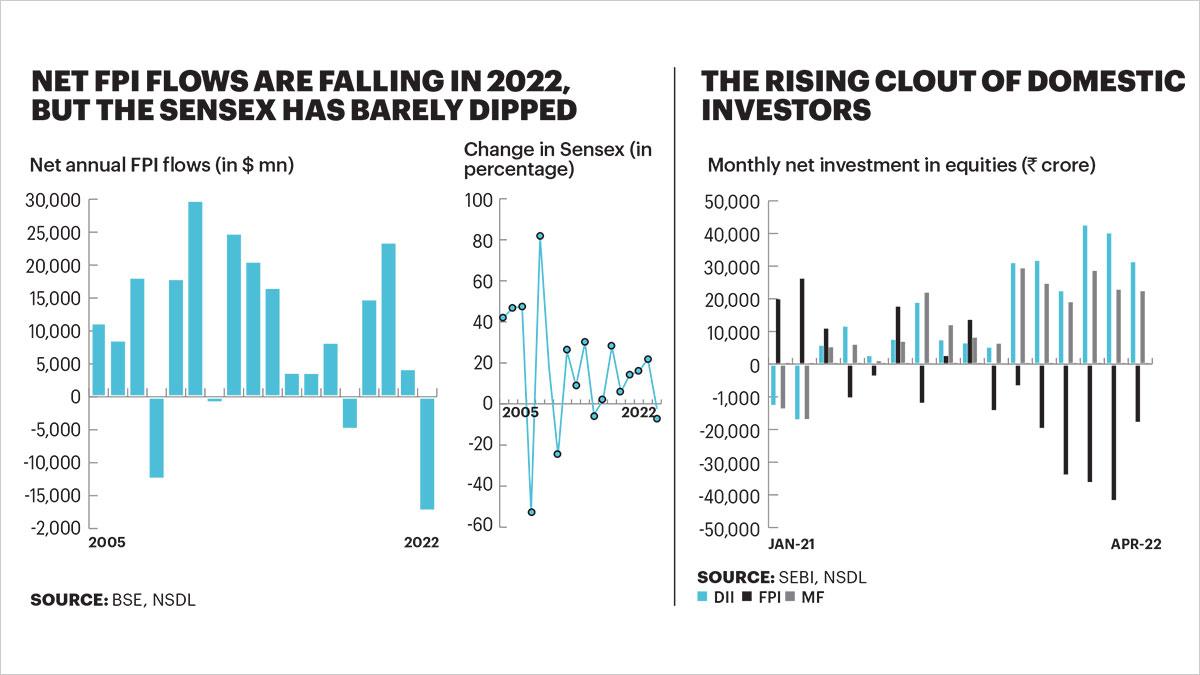 The fact is clearly established that a huge quantum of domestic flows is coming to the market and making it resilient amidst global uncertainties. But what exactly is driving this liquidity to the markets even as the traditional avenues of investments—primarily real estate, gold and bank deposits—still exist?

“Domestic flows are coming to the market as people are abandoning physical assets and investing heavily in financial assets,” says Saurabh Mukherjea, Founder and Chief Investment Officer, Marcellus Investment Managers. He adds, “[The] reason being that physical assets have not delivered returns in the past five to six years. Further, there is no liquidity or rental yield in physical assets, plus they are tax-unfriendly and there is no capital appreciation. So, the business case for physical assets is completely broken. With each passing year, financialisation of assets is getting more robust and the vulnerability of domestic stock markets to foreign flows is getting lesser. Financialisation of Indian savings is a structural story now.”

This trend is being witnessed even as interest rates are at multi-year lows, which typically should have fuelled a liquidity rush towards physical assets like real estate. Currently, home loans are available quite cheap—with some banks offering rates as low as 6.75 per cent—and while both demand and price in the real estate sector have moved up in the recent past, it is negligible when compared to metrics like MF flows or the entry of new investors in the market. It is more telling of the fact that the abandonment of physical assets is comprehensive, says Mukherjea.

The low rates leading to abysmally low deposit rates have also convinced many potential investors to look at direct stock investing or parking their money in liquid funds that may well be offering a slightly lower rate of return when compared to bank deposits but make up with the added benefit of a negligible lock-in period. “The savings habits have substantially changed. The early FD [fixed deposit] money has moved to mutual funds,” says B. Gopkumar, MD & CEO, Axis Securities, adding that the recent resilience has been entirely due to domestic money.

While a majority may think that the domestic flows have made the Indian stock market resilient, there is another theory: are the flows holding up the market or is the market driving the flows? Many say that while the number of demat accounts and unique MF investors have grown manifold in the past couple of years, going ahead one could see a different trend if the market falls and stays there without recovering like it did in March. “It is difficult to isolate the cause and effect. What happens if there is another fall? I would like to be cautious about assuming that going ahead the flow will stay the way it is right now,” says Aashish Somaiyaa, CEO, White Oak Capital Management.

Somaiyaa explains that while flows strengthen the market, the market provides sustainability to the flows. “If the market falls 10-15 per cent and then does not recover and just consolidates at lower levels, then the flows could slow down as people would lose confidence. If the market does not reward [investors], then whatever be the demographics of the investing community, people will get disenchanted,” he says.

Market players usually have two common questions: If there is a rally, is it sustainable or short-term? If liquidity is pouring in, will it sustain or trickle down? The debate between long-term and short-term is a constant. It is a given that people come to the market to make money. Till the time one is able to make money—across varying time frames—money will keep pouring in, say experts.

The risk profile of today’s investor has also changed from those who entered the market a decade or two ago. Earlier, people used to invest their surplus money in stocks after putting it in real estate, gold or bank deposits. A majority of the new investors are aged 25-35 years and have a higher risk appetite. They are fine with losing some money as long as they see the potential of making money in the longer term.

A lower interest rate regime—though some banks have upped rates after the recent rate hike by the Reserve Bank of India—and the formalisation of various sectors and investment options have acted as catalysts in channelising an increasing share of savings to the stock markets. “Earlier, investors would get scared if there was a fall as equity was perceived to be risky. Today the average investor coming to the markets does not seem scared with a 10-15 per cent fall,” says Somaiyaa.

So, while it may appear that the flows look sustainable, one would have to wait and watch—as always—to see how the market plays out even as foreign and domestic investors continue to take opposite paths. Till that time, the market remains ‘self-reliant’.