News
Magazine
Market
The Risks of Investing in Foreign Stocks

The Risks of Investing in Foreign Stocks

Indians are increasingly buying stocks of some of the biggest global companies. But the diversification comes with heightened volatility and currency risks

When the world’s richest person says something, everyone listens. So, when Elon Musk said that he had acquired a significant stake—9.2 per cent, to be precise—in Twitter and planned to acquire the microblogging company, everyone took it seriously. While some analysed his actions from the angle of “free speech”, there were many—including a large number of average Indian investors—who looked at it from an investment perspective.

For, they rightly thought that news about the world’s richest person buying one of the most influential microblogging platforms will send the company’s stock zooming. It did indeed. Shares of US-listed Twitter jumped a little over 28 per cent in a single day on April 4—a day after Musk made his stake public—even as a number of Indian investors placed their bets on Twitter.

Such investors are part of a growing tribe of Indian retail investors who are taking positions on multinational companies—mostly listed on US bourses—either by investing directly via global investing platforms, or through broking firms that have tie-ups with such platforms. Interestingly, some of these platforms saw a five-fold rise in the quantum of Twitter shares traded on April 4. The average transaction value also registered a spike, clearly corroborating the fact that each investor was ready to buy more. Twitter is just one example, though. Shares of companies like Meta (formerly Facebook), Netflix, Tesla, and also some of the meme stocks like Gamestop also saw heightened activity from Indian investors when they were in the news.

In India, some international and home-grown platforms such as Vested Finance, Stockal, Winvesta and INDmoney, among others, offer an international trading facility wherein Indian investors can directly buy shares of companies listed on foreign bourses. Many large broking firms in India have also tied up with these platforms to help their clients buy shares of overseas companies. The trend caught everyone’s fancy during the lockdowns when people were locked inside their homes and had the time to explore various investment options as part of their overall diversification strategy.

“Indian retail investors want to diversify their investment options with exposure to some of the world’s largest companies,” says Vinay Bharathwaj, Co-founder and Co-CEO of Stockal, which launched cross-border investment services in 2019 and currently has over 300,000 registered users. “They have the advantage, via US stock investment, to invest in emerging themes like the metaverse, crypto assets-linked stocks, AI and space tourism, among others, that are yet to make a mark in India,” he adds.

While initially, a bulk of the action was limited to the stocks of the so-called FAANG—Facebook, Amazon, Apple, Netflix & Google (now Alphabet)—group of companies, recent times have seen Indian investors take exposure in newer sectors like electric vehicles (EV), semiconductors, AI, cryptos and robotics through companies like NVIDIA, Nio, Coinbase Global and AMD, among others.

Swastik Nigam, Founder and CEO of Winvesta, believes that factors like social sentiment create a big impact on short-term investment decisions of Indian investors. “Last year, we saw Indians participate in the meme stock phenomenon, trading stocks like Gamestop and AMC. In 2020 and 2021, EV stocks were popular buys, while this year we are seeing interest in chip-makers and crypto platforms,” says Nigam, while adding that M&A deals are also driving opportunistic trading in India.

According to Viram Shah, Co-founder and CEO of Vested Finance, which has over one million users, and which executed trades worth $250 million last year, Indian investors want to own a part of large global brands like Apple, Tesla, Amazon, Nike and Starbucks, among others. “The overseas markets give a chance to invest in some of the most cutting-edge companies in emerging areas such as AI, autonomous vehicles, robotics, and others,” says Shah, while adding that there has been a heavy concentration of tech stocks in the top 10 most traded overseas stocks by Indians.

Till a few years ago, Indian investors were not aware that they could invest in US stocks. The processes, too, were cumbersome, with fund transfers and account opening taking three to four days. That has changed substantially with tech innovation, adds Shah. “Buying shares of a foreign company is quite seamless nowadays. It is just like buying shares of any Indian company. One can open an account with any of the overseas investing platforms, or just check with their broking firm, which might have tied up with one of the platforms,” he adds.

According to the Liberalised Remittance Scheme of the Reserve Bank of India (RBI), Indian individuals can remit up to $250,000 in a single financial year. The limit can be used to invest in equities, debt, or even buy immovable property abroad.

Interestingly, the concept of fractional purchases—buying a fraction of a share—is allowed while buying US equities, which make these shares affordable for many Indian investors. This assumes significance as the cumulative cost of one share each of the FAANG companies would set an investor back by nearly Rs 4 lakh at current prices. If the price of the stocks is a deterrent, one could even use the mutual fund route as the past couple of years have seen many fund houses launch schemes that are particularly focussed on international investing.

“There are two sets of investors. One who want choice and others who only want international diversification. For the second set, mutual funds offer simplicity, and they do not have to worry about when to buy or sell. Mutual funds are cheaper as well,” says Pratik Oswal, Head of Passive Funds at Motilal Oswal Mutual Fund, which manages the country’s largest mutual fund scheme for international investments. While the process may well be seamless, there is a cost attached to it, and it is typically much more than what one would pay to buy Indian shares. 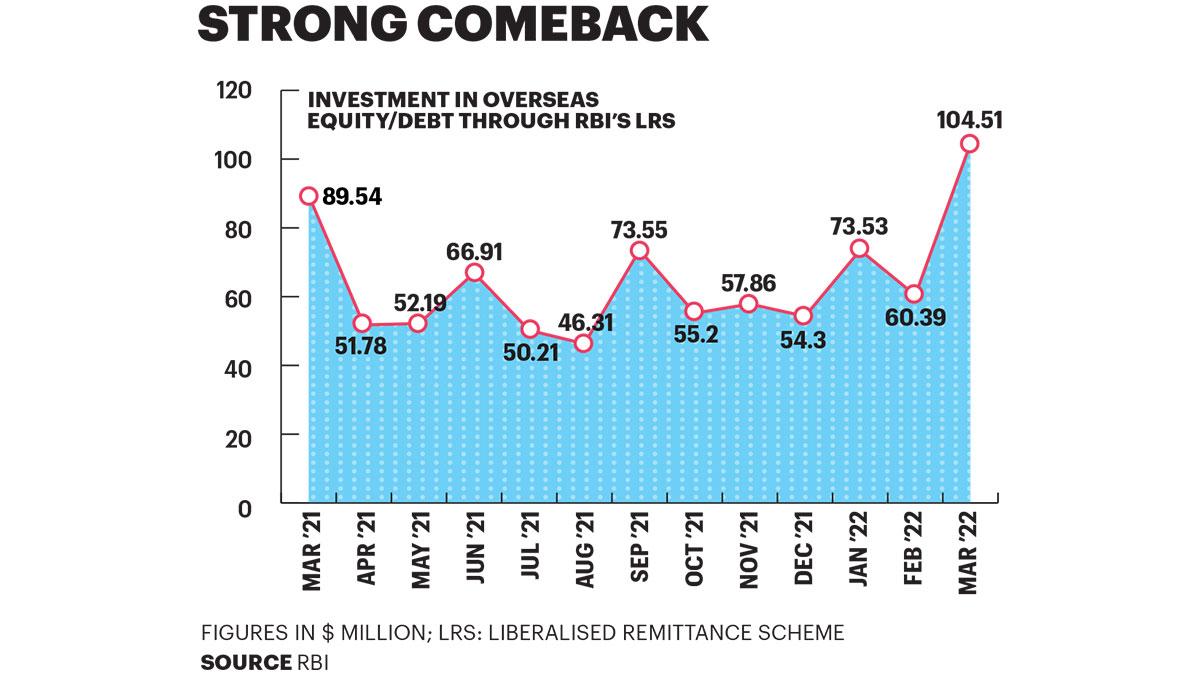 Indians investing in the domestic market are used to a broking fee along with some minor statutory charges including a securities transaction tax. Despite these, the cost of trading stocks in India is not very high. But overseas trading entails a host of charges apart from the normal broking fee, and the costs at times could be substantial, especially considering the fact that they are charged in dollars.

Apart from the broking fee, an investor bears the bank transfer and withdrawal charges (paid when moving funds from an Indian bank account to a US-based bank account, and vice-versa), and a mark-up on the currency rates. To be sure, the cost of trading US equities has come down over the years—but earlier, every trade would have cost the investor anything between $10 and $15. “Till a few years ago, US stock investment platforms charged as much as $10 per month, and $10 per transaction. Today, there is no monthly fee or trading commission. The only charges are related to the movement of money,” says Nigam. Incidentally, investing platforms are working on reducing the costs—including those related to withdrawal charges—to bring down the overall cost of trading in US stocks for Indian investors.

Meanwhile, an important aspect of investing in overseas stocks is that the exposure is not only to heightened volatility of the US equity markets—US stocks are known to gyrate 20-25 per cent in a single day—but also to the risk of currency fluctuations.

Then, there is the tax element. While an Indian will be taxed only in India, the threshold for ascertaining long-term gains is two years for US stocks compared to one year for domestic equities. While long-term capital gains are taxed at 20 per cent with indexation benefit, dividends are taxed at 25 per cent, though one can offset it against overall tax liability.

There is no denying the fact that the quantum of investments made by Indians in overseas equities will only move north. The segment has seen the investors evolve, and now, they actively look at exchange-traded funds as an investment avenue. There is also a growing set of investors who look at non-US listed companies, where they take exposure in firms like Alibaba, Adidas, Sony, Bayer, Barclays and Toyota, among others, through their depository receipts listed on the US bourses.

According to the RBI, the cumulative investment in overseas equities and debt by Indians was nearly $105 million in March—the highest in well over a year. There are nearly 80 million demat accounts in India, of which around 30 million are active ones investing in domestic equities, while around 3 million invest in overseas equities.

Even if we look at a 25 per cent conversion rate of people that actively invest in India, the opportunity is huge, says Shah.