Rich individuals who are used to making a quick buck in an IPO by using leveraged finance will find the going difficult as twin regulatory moves – one each by RBI and Sebi – have put a spanner in the IPO financing arena. It seems to be good news for retail investors though

Late last year, an alleged spat between BharatPe’s former MD Ashneer Grover and Kotak Wealth Management brought to the fore the issue of leveraged finance in the initial public offering (IPO) arena in India. While the spat soon turned into an ugly legal battle with the jury still out on who was at fault, the controversy made many in the markets realise that IPO financing was not just some short-term lending activity. It was an industry where billions of dollars were at stake whenever an IPO hit the market.

In IPO financing, high net-worth individuals (HNIs)—non-institutional investors (NIIs) in market parlance—borrow money from non-banking financial companies (NBFCs) to put in bids worth hundreds of crores in a public issue. Such lending is typically done for just 7-9 days depending on the IPO timeline and comes at a significant cost—around 9 per cent per annum—but is still quite popular among HNIs. Industry estimates peg the cumulative lending amount to be around Rs 50,000 crore for a mid-sized issue with good demand.

However, the dynamics are set to change as concerted efforts of two regulatory bodies—the Reserve Bank of India (RBI) and the Securities and Exchange Board of India (Sebi)—are set to make it increasingly difficult for NBFCs to lend thousands of crores in IPO financing.

More importantly, the general public—or the average retail investor—is set to be the biggest beneficiary in what is anyway called a public issue.

Last October, the RBI issued a circular with a nondescript title, ‘Scale Based Regulation (SBR): A Revised Regulatory Framework for NBFCs’. It was a 14-page document, but a small two-line clause on the fourth page made many NBFCs experience a flatline. “There shall be a ceiling of Rs 1 crore per borrower for financing subscription to Initial Public Offer (IPO). NBFCs can fix more conservative limits,” stated the RBI circular. “The instructions relating to ceiling on IPO funding… shall come into effect from April 01, 2022,” it added.

Just two lines but the message for the NBFCs was loud and clear. The regulator was not comfortable with the kind of exuberance—irrational, according to many—that was witnessed in many IPOs. The exuberance is corroborated by the fact that some of the IPOs last year and even in the distant past saw the HNI portion getting subscribed between 500 times and 900 times even as the overall issue and other investor category segments saw more realistic bidding numbers (see Eye-Popping Gains). For example, the IPO of Paras Defence & Space Technologies was subscribed nearly 214 times overall, but the HNI, QIB and retail segments were subscribed 955, 70.75 and 100.8 times, respectively. A similar trend was seen in the IPOs of Latent View Analytics, Tega Industries and MTAR Technologies, among others.

Meanwhile, a couple of months after the RBI diktat came a Sebi announcement of similar timbre. Sebi revised the allocation methodology for HNIs—one-third of the HNI portion would be reserved for applicants with a bid size of more than Rs 2 lakh and up to Rs 10 lakh, while the remaining two-thirds would be reserved for applicants with application size of over Rs 10 lakh. 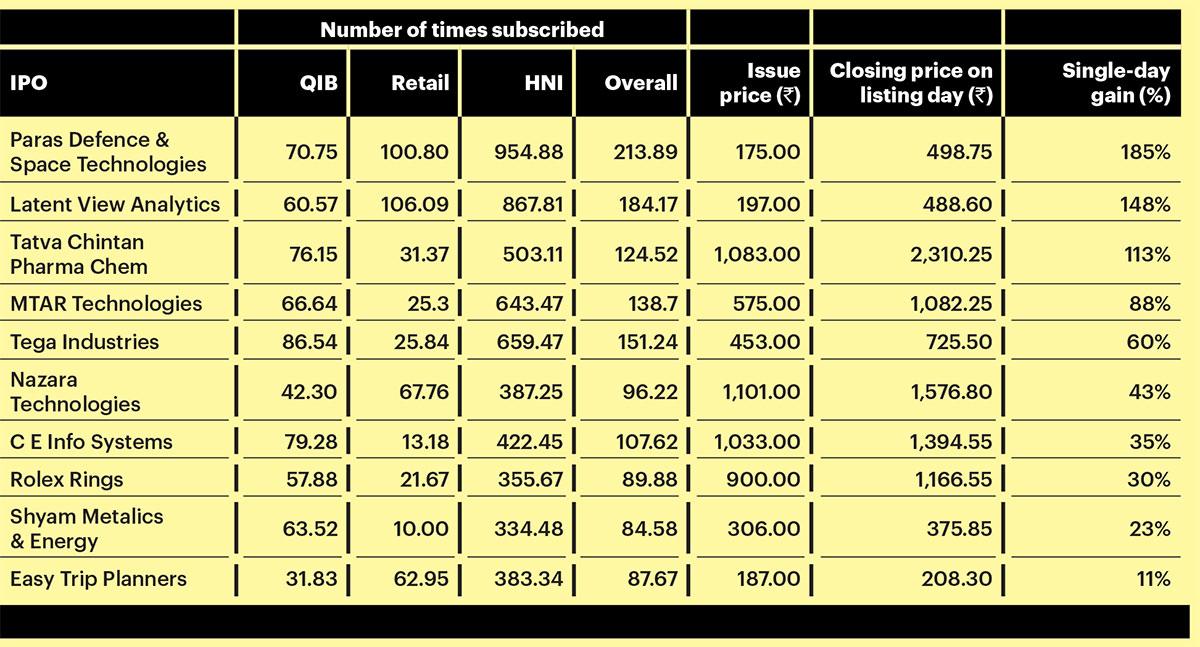 THE MATH & THE MECHANICS

IPO financing is a high-stakes game where NBFCs mint a lot of money. That it is lucrative can be gauged from the fact that most of the leading broking firms have an NBFC arm through which they lend money to their HNI clients. Interestingly, NBFCs make a profit even if the HNIs don’t, because NBFCs collect an upfront margin from them, and the lending obviously comes at a cost.

Here is how it all happens. Let’s say an HNI wants to put in a bid of Rs 100 crore in an IPO. The NBFC tries to ascertain the expected demand for the IPO and computes the margin accordingly. If the HNI segment is expected to be subscribed 500 times, then the initial margin would be the total bid amount divided by the expected subscription—in this particular case, Rs 20 lakh. The balance money can be borrowed by the HNI at around 8-9 per cent per annum—mega-sized IPOs with huge demand see a lower rate of interest—with the typical borrowing period being 7-9 days depending on the IPO timeline. Incidentally, the HNI has to transfer the interest component also to the NBFC before borrowing the money. So, the NBFC pockets the initial margin and the interest component even before the shares are allotted.

Meanwhile, to meet the borrowing demand ahead of any IPO, NBFCs typically raise funds by issuing commercial paper (CP) to mutual funds. The interest component on such issuances is in the range of 4.75-5.5 per cent. With the money being lent to HNIs at around 8-9 per cent, NBFCs enjoy a decent spread in this leg of the transaction as well.

For NBFCs, financing HNIs in IPOs is an assured income, but with both RBI and Sebi breathing down their necks, the dynamics of the industry are set to change. “There would be a definite impact on IPO financing as the price mechanics would change. From a financing point of view, elements like quantum of margin and cost of finance could change,” says Suvajit Ray, Head–Product & Distribution, IIFL Securities. “Larger NBFCs that do not have access to captive broking clients might look at tying up with various broking firms, including the regional ones that would be looking to finance their clientele. However, the overall quantum of financing would definitely come down as participation in terms of HNIs with a smaller quantum of bids will go up.”

While NBFCs may lose out on business, it was never the focus area of the regulators. As mentioned earlier, the only aim was to reduce the exuberance witnessed in the HNI segment of IPOs and bring in some sanity. Pranav Haldea, Managing Director of Prime Database, a primary market tracker, believes some sanity will return to the IPO market, especially at a time when many issues saw their HNI portion getting subscribed multiple hundred times. “Instances of individual HNIs putting in Rs 100-crore bids in a single IPO will go away. That is good for the IPO market and will also reduce the volatility on the day of listing because leveraged HNIs come primarily for listing-day gains,” says Haldea.

Data from Prime Database shows that till date there have been 11 IPOs in which the HNI portion has been subscribed over 500 times each with Apollo Micro Systems—the IPO came in January 2018—holding the record at 963.53 times. Interestingly, its retail segment was subscribed only 39.04 times, while that reserved for institutional investors saw a subscription of 42.15 times.

Last July, the IPO of Clean Science & Technology saw retail portion subscription in single digits—8.09 to be precise—but HNIs clearly saw something in the company that the retail investors couldn’t. What else would explain the 205 times subscription in the HNI portion.

Market veteran Arun Kejriwal believes this kind of dichotomy in terms of the response from different categories of investors will be a thing of the past going ahead. He says the regulatory moves will lead to a two-fold benefit as HNI bids will get more realistic and, more importantly for retail investors, pricing of IPOs would also be more realistic. “The RBI move will have two major repercussions in the capital market. Days of HNI portion getting subscribed 500 or 800 times are gone as HNIs will no longer have access to huge funds at a mere 1 per cent margin since margin was a function of the quantum of subscription,” says Kejriwal, Director, Kejriwal Research & Investment Services. “Secondly, there will be no rush to sell on the listing day, which can partly be attributed to the Sebi move. The greater impact of the two moves put together would be that the pricing of IPOs would be much more realistic.”

Listing of a new firm on the bourses is always looked upon with excitement, with investors keen to know how the public markets value the company. Price discovery is an important aspect of the stock markets, but leveraged HNIs hamper the process since the debut day sees intense selling pressure in the first few hours of the trading session. This is primarily due to the fact that such HNIs subscribe to the shares only for listing-day gains.

In fact, market participants say that at times even a good listing might not lead to HNIs making money as around 15-18 per cent goes towards financing costs. “A stock may list at a premium of 20 per cent and while genuine investors may feel happy, leveraged HNIs might still be in the red considering their borrowing costs. The bigger issue is such HNIs add to the selling pressure, thereby impacting the gains of genuine investors,” says a person involved in the IPO marketing process.

Haldea believes that curtailing HNI financing would reduce the volatility on listing day. There will be lesser selling pressure that day, which will in turn lead to better price discovery. In a similar context, Kejriwal says the pricing of IPOs, going forward, could be 15-20 per cent cheaper than what they normally would have been if the RBI and Sebi measures were not there. Reason: there will be less money available to pump up demand.

While one may have to wait and watch to see the real benefits in terms of sanity or pricing, one thing is for sure: the kind of artificial demand that was created using leveraged finance will certainly go down and genuine investors will reap the ensuing benefits.