The Karvy case has dented investor confidence in the broking industry. It's time to shift focus from price to credibility
Aprajita Sharma Print Edition: December 29, 2019 Investors spend considerable time comparing the service charges of various brokerages but take safety for granted. While the debate on the cut-throat fee models in stock broking rages, the recent Karvy scam has diverted focus on the vital issue of protection of investors' funds and securities lying with brokerages.

Investors with Karvy Stock Broking found themselves in a tight spot after the brokerage was hauled up by the Securities and Exchange Board of India (Sebi) for allegedly using clients' shares to raise funds from some banks and finance companies and transfer that money to some group companies. The market regulator accused it of misusing Rs 1,096 crore. The National Stock Exchange suspended its licence early-December. In an interview with BT, C. Parthasarathy, Chairman and MD, Karvy Group, said, "We are of the firm belief that investments made through owned funds of the group and borrowings other than the pledge of securities were fully compliant with the relevant provisions and directives of the regulator during the period that they were made. Further, we wish to reiterate that all monies transferred from time to time were solely for the ongoing conduct of business in subsidiary firms."

This most recent incident puts a question mark on the credibility of all types of brokerages, be it no-frill discount brokers, or advisory-led ones, whether bank-based or not. The alleged misuse of clients' securities suggests that even traditional brokers that have built relationships with clients over the years cannot be blindly trusted.

"All brokerages do some proprietary trade to supplement their broking income. Brokerages backed by a bank with healthy balance sheets can easily absorb losses, if any, but a standalone broker may not be able to. This is what seems to have happened with the non-bank traditional broker Karvy," says Ghanisht Nagpal, convener of the Delhi Investors Association.

Kolkata-based BMA Wealth Creators (now called BRH Wealth Kreators) had come into the limelight in 2011 when it had roped in actor Kareena Kapoor for a television advertisement to promote its lowest cost transactions at 'just 1 paisa per trade'. But the company, which claimed to have 10.75 lakh customers and 42 branches, allegedly misappropriated client shares worth Rs 100 crore. The NSE suspended its licence in October 2019, which left its investors in a lurch. Last year, another Kolkata-based firm, Guiness Securities, reportedly misused client securities worth Rs 212.17 crore. There have been others too: Fairwealth Securities, Ficus Securities and Allied Financial Services, to name a few. 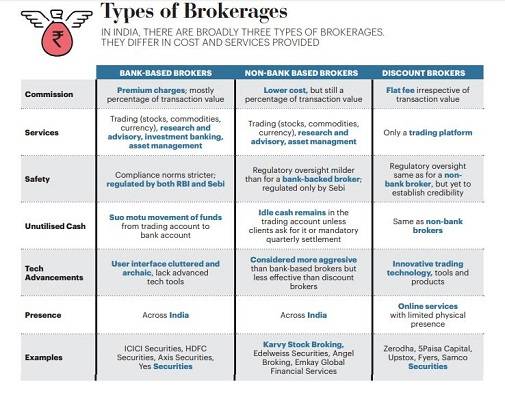 At the core of the problem is proprietary trade - broking firms trading in stock, currency and bond markets to earn extra revenue apart from the commission coming in from clients. Ambareesh Baliga, an independent market analyst, says he prefers brokers whose main business is client transactions. "They should not be running a proprietary desk or other unrelated capital-intensive business."

There are some new-age discount brokers too that aim to stick to the straight and narrow. Discount brokers Upstox and Fyers, for example, do not do proprietary trade and rely only on brokerage fee and volumes. Upstox has, in fact, moved to the electronic delivery instruction slip service (e-DIS), doing away with the system of clients authorising brokers through Power of Attorney (PoA) to transfer shares from their demat accounts. PoAs throw open client accounts to misuse by brokers, as is being alleged in the Karvy case.

"With e-DIS, customers can sell stocks in real-time, without giving us a physical DIS or a PoA. We are the first brokerage to have introduced this, in April 2018," says Shrini Viswanath, Co-founder and CTO, Upstox. On the Upstox platform, when you place a sell order, a dialogue box seeks your permission to use the e-DIS facility. Once you 'okay' it, you only have to verify your transaction by entering the OTP sent on the registered mobile number and email address.

Fyers, too, is in the process of moving to e-DIS. Tejas Khoday, CEO and Co-founder of the brokerage firm, says that they wanted to run a pure play broking firm to avoid conflict of interest. "As a broker, we have information about a lot of trading-related activities. If we were to trade, it wouldn't be a level-playing field with customers," he says.

A bank-based broker can offer proprietary trading depending on the conditions stipulated by the banking regulator, the Reserve Bank of India, at the time of giving the approval to the parent bank for setting up the subsidiary, explains Ashish Rathi, Wholetime Director, HDFC Securities. "If, in the approval, it is mentioned that prop trade cannot be done, it will be prohibited. In case there is no such restriction, the same can be offered by a bank-based broker, provided it is being disclosed to customers. At HDFC Securities, we do not undertake prop trading."

Vijay Chandok, MD and CEO of ICICI Securities, says, "We are a bank-driven broking firm. Security is in our DNA." He adds the brokerage is making heavy investments in data security, user privacy and disaster recovery set-ups.

If bank-based brokers are considered safer, then why are there so many non-bank and discount brokerages? The answer lies in cost and convenience.

There was a time when trading was a cumbersome and expensive process. But, one-click trades, no-frill accounts and flat fees by discount brokers changed that. Nithin and Nikhil Kamath-owned Zerodha toppled the goliath ICICI Securities to become the largest broking firm in terms of active clients (it recently won the best retail brokerage award by the NSE). The discount brokerage had 10,76,406 active users as of October 2019 while ICICI Securities had 9,14,987. But the tech-savvy new breed of investors who have brought the likes of Zerodha to the top actively troll the brokerage on social media complaining against frequent technical glitches. Technical snags are common with traditional brokers too, but don't come into the limelight that often, says Nithin Kamath, Founder and CEO of Zerodha. 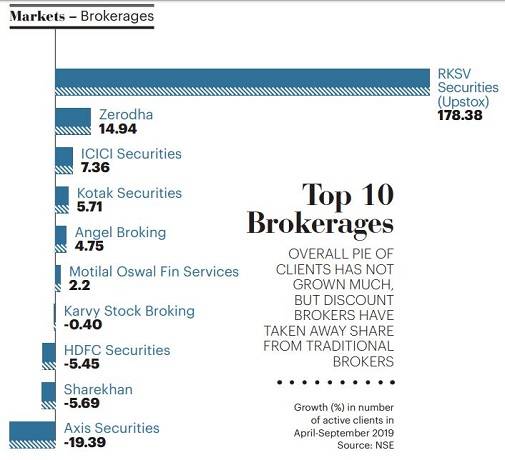 Notwithstanding the technical prowess, the client base of discount brokers is growing. The active clients base of Upstox, which started its retail broking business in 2012, jumped 178 per cent during the first six months of 2019/20. For 5Paisa Capital (retail broking arm of IIFL Group), the jump was 121 per cent; for Zerodha, it was 15 per cent in the same period. Among traditional brokers, ICICI Securities' active client base grew 7.4 per cent during the period. HDFC Securities and Sharekhan saw their respective bases fall -5.4 per cent and -5.7 per cent, respectively. Axis Securities grew 5.7 per cent and Kotak Securities, 4.7 per cent.

"The share of active customers for discount brokerages has gone up from 7-8 per cent to 14-15 per cent in just a matter of one-and-a-half years," points out Prakarsh Gagdani, CEO, 5Paisa Capital.

Competition is high, and low brokerage fee along with advanced technical tools that discount brokers offer, click with traders. So, it's not surprising that broking revenues of big players are being hit. ICICI Securities saw a decline of 13 per cent, from Rs 247.3 crore in the second quarter of 2018/19 to Rs 215.8 crore in the same quarter 2019/20. Motilal Oswal saw an increase of just 3 per cent to Rs 301.9 crore from Rs 293.9 crore. Half-year revenues saw no growth.

Discount brokers may have been winning the price war; they have an edge in technology too. But the recent Karvy mess may well trigger a shift back to bank-based brokers, which have stepped up their game.

ICICI Securities is using its bank link. ICICI Bank has roped in actor Shahrukh Khan as a brand ambassador for its 'The One Savings Account'. In various TV commercials, Khan is seen extolling the benefits of the savings account that offers brokerage waiver on stock trading up to Rs 40 lakh, among other benefits. "The bank arrangement is showing some early promising signs with 39 per cent improvement in activation rates (second quarter of FY20 versus second quarter of FY19)," says Chandok.

The brokerage is also positioning itself as a 'supermarket' for all kinds of financial products. In April, it launched ICICIdirect Prime, a subscription-based plan offering privileged pricing, liquidity and curated research to its clients. As of September 30, the brokerage had 1.6 lakh prime subscribers.

Yes Securities has a value subscription plan that gives an option to customers to customise their brokerage fee based on average trading volumes and value of their transactions.

User interface, however, tends to be cluttered on trading terminals of traditional broking firms. "You open a terminal of a big broker and you feel you are back to 1970s," complains Nagpal of the Delhi Investors Association.

Traditional firms are aware of their shortcomings and are tying up with fintech firms to offer better user experience and advanced features. Angel Broking, for instance, is looking to engage with start-ups and innovative organisations to bring novel products for consumers, says Prabhakar Tiwari, Chief Marketing Officer of Angel Broking.

ICICI Securities has also laid out its API (Application Programming Interface) architecture, a software interface that connects two applications. "We are now in a position to integrate with fintech partners in a scalable manner to improvise our platform. We have already selected three companies and integration with one of them is done," says Chandok.

But will a better user interface be enough?

US-based discount brokerage Charles Schwab started out on core principles of 'no advice', 'no sales' and 'customers first'. Eventually, they realised that customers wanted advisory services. Taking the route of independent advisers, Schwab rolled out advisory-driven customised products at a fee that undercut what independent advisers were charging. Today, advice-led business comprises a large part of its profits.

Traditional brokerages in India too are sure that advisory model will stay relevant. "The customer needs to know what to buy, when to buy and how much to buy. We need to be objective and keep in mind client suitability when selling a product. For example, our advisory desk ensures that every participant is hedging his exposure right. So, while DIY is a necessity, the quality of advisory services is what will set you apart across all asset classes," says Mayur Joshi, Executive Vice-president at Yes Securities.

In a recent analyst call, Motilal Oswal Securities categorically denied competition from discount brokers. "We have differentiated our position as a full service advised-based broker, the demand for which is growing."

Industry players feel that quality of advice and services - and not just cost - will be the defining factor in the broking business. Investors will have to pay for research either separately to registered independent advisers (RIAs) or get it bundled with the transaction cost via traditional brokers. "Sooner or later, every investor would be tech savvy enough to do their own trades. The larger investors who need external research support would prefer full services brokers, while retail investors would either resort to online research tools or paid advisory service by RIAs. Standalone, the transaction service cost would be negligible for all," says independent market analyst Baliga.

Not really. Gagdani of 5Paisa Capital sees no need to compete with big broking firms. "We are targeting the unpenetrated market. The market is unlikely to saturate any time soon. When that happens, well target the competition, but right now, we are exploring opportunities outside the industry," he says.

For Zerodha's Kamath brothers, the real worry is Paytm Money, which can leverage the huge customer base of its parent firm for cross-selling and up-selling various products at a low cost. Zerodha has tightened its operations, curbing tech failures. "Our nine out of 10 technical issues stemmed from our external exchange-empanelled order management system. Weve been investing a lot of time and effort to move more and more pieces of the OMS into our in-house technology stack to reduce dependency," says Zerodha's Chief Technology Officer Kailash Nadh.