Despite the challenging business environment, a clutch of companies posted stellar results in the earnings season. BT handpicks 10 outperformers on Dalal Street.

There seems to be a spring in the step of the bulls on Dalal Street once again. The markets have recovered almost 50 per cent from the three-year low on March 9 and the Sensex is now hovering around 12,000 again.

The reason for the spreading cheer on Dalal Street, and the equity markets around the world, is the hope of an imminent turnaround in the fortunes of the global economy. Investors were pleasantly surprised after a closely-watched measure of US consumer confidence soared in April, suggesting Americans may be ready to spend again—a boon for export-driven Asian countries. An easing in the pace of home price declines also boosted sentiment.

A cross-section of analysts that BT spoke to, though, was still not convinced that the markets globally, and in India, would see a sustained bull run. They point out that it is premature to talk about an economic recovery just yet.

So, for retail investors, say analysts, the safest option is to fall back on the time-tested strategy of backing the fundamentally sound companies. The quarterly results are a good indicator to separate the men from the boys. We have shortlisted 10 companies which have not only declared robust results, but have also given earnings forecast. 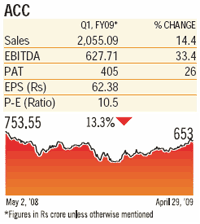 Overall, the company increased its domestic two-wheeler marketshare during FY2009 by an impressive 4.17 percentage points to almost 49 per cent. Lower dependence on auto financing, compared to competition, has helped the company, say analysts. Further, strong demand for its Splendor and PassionPlus models continues in the nonmetros and rural areas. Says Hitesh Agrawal, Head-Research, Angel Broking: “The company’s better-than-industry performance on the volume front and the fact that it’s a debt-free company with cash surplus makes it a good defensive bet.”

It’s a good pick because its expanding network across both urban and rural markets gives it an edge over competition.

ACC: The largest cement producer in India, ACC delivered impressive results in the January to March period (its first quarter). It posted a 14.4 per cent growth in top line to Rs 2,055 crore, while the bottom line expanded by 26 per cent to Rs 405 crore.

The company attributes its performance to “brisk demand for cement emerging from rural housing and various infrastructural projects” and expects that the outlook for cement will continue to be healthy in 2009.

Consequently, it is going ahead with the planned organic expansion which would lead to an increase in cement capacity to 30.58 million tonne by mid- 2010 from about 22.63 million tonne now. Says Ajay Parmar, Head of Research, Emkay Global Financial Services: “We have upgraded our earnings estimate for ACC.” It’s a good pick because the company will continue to benefit from the robust cement demand ensuring strong dispatch numbers and higher realisations. 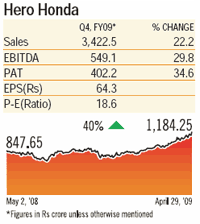 Hero Honda: The two-wheeler giant recorded a 22 per cent growth in net sales, which beat the street expectations. Sales came on the back of a 13 per cent y-o-y growth in volumes and better than average realisations primarily due to the change in sales mix. The company’s bottom line increased 35 per cent due to an increase in operating profit margins aided by a decline in raw material costs. 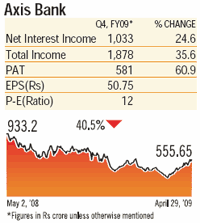 Axis Bank: India’s third-largest private bank posted a strong net profit growth of 61 per cent in the fourth quarter, driven by substantial treasury profits. The bank’s reported net interest margin (NIM)—the gap between what a bank spends on its deposits and earns on loans—improved sequentially, enabling it to post a reasonably healthy 25 per cent y-o-y growth in net interest income (NII). This was largely a result of re-pricing of bulk deposits at much lower rates during the quarter. The relative traction in the bank’s CASA (current and savings account) deposit growth is likely to be maintained on the back of continued branch expansion and customer acquisition. The management has indicated 200 branches and 700-800 ATM additions in the current fiscal. Says Agrawal: “The stock deserves premium valuations on account of its attractive CASA franchise, multiple sources of sustainable fee income, strong growth outlook and A-list management”. It’s a good pick because it’s a strong private bank with a growing market share in corporate and retail banking. 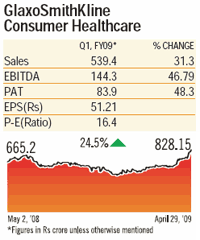 GlaxoSmithKline Consumer Healthcare: The health food major clocked an outstanding top-line growth of over 30 per cent in the quarter ending March 2009 y-o-y. Both its core brands, Horlicks and Boost, continued to perform well across regions, aided by strong marketing push and higher contribution from variants. The robust top-line growth ensured an impressive bottom line growth as well. The company’s profits for the quarter grew over 48 per cent y-o-y. Despite the economic slowdown, management has guided a healthy volume growth of 8-9 per cent in its malted beverage category this fiscal. Says Agrawal: “We expect GSK Consumer to report a healthy top-line growth this fiscal, on the back of robust volume growth across core brands and superior pricing power.” It’s a good pick because it has a portfolio of strong brands which should continue to see robust volume growth. 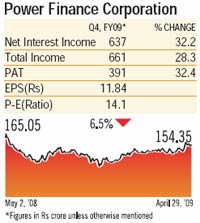 Power Finance Corporation: The company is a leader in power financing and is the main financer of state power sector utilities. In its fourth quarter, its net interest income grew 32 per cent y-o-y led by margin improvement and sequential disbursement growth of 63 per cent. The generation segment continued to be the primary driver of growth. PFC improved its spreads during the quarter primarily due to a jump in yields, despite cost of funds increasing, which demonstrates the company’s pricing power. The company’s strong credit and project appraisal techniques have mitigated the asset quality concerns and enabled it to have a clean and healthy asset book. Says Sanjeev Patkar, Head-Reasearch, Dolat Capital: “We believe the strong business visibility, higher margins with best-in-class asset quality make PFC a core portfolio holding.” It’s a good pick because it appears well placed to take advantage of the huge funding opportunity due to the massive power investment programme of the government. HDFC Bank: The bank has reported net profit growth of 34 per cent in its fourth quarter even as the net interest income has grown by a sedate 12.8 per cent. The highlights of its performance were a 40 basis points expansion in tier I capital ratio, moderation in NPAs and improvement in branch utilisation ratios. The asset quality remained stable during the quarter with net NPA at 0.6 per cent. Advances per branch and CASA per branch showed significant improvement. The bank’s deposits grew over 40 per cent. The fee income, too, has grown at a robust pace, surging almost 24 per cent y-o-y in the fourth quarter. Says Parmar: “The stock is a good bet. HDFC Bank will offer the least negative surprises on asset quality.” It’s a good pick because it has superior credit risk management systems which ensures healthy asset quality. Bharat Electronics: A navratna DPSU (Defence Public Sector Undertaking), BEL has a 57 per cent market share in the high margin and sensitive defence strategic electronics business. In its fourth quarter results its net sales expanded by a steady 18 per cent while profits grew by 11 per cent. What’s more, during the quarter, BEL signed various MoUs for JVs in defence-related products, including a project with Boeing to open a center to support India’s defence modernisation efforts. The company now has an impressive order book of Rs 10,000 crore. Says Patkar: “We estimate the order book to swell to almost Rs 12,000 crore in another couple of years on account of various initiatives taken by BEL on exports front, technology tie ups and strategy to focus on civilian sectors.” It’s a good pick because the company has a virtual monopoly in the defence electronics arena and has a degree of certainty in its future cash flows. Rallis India: It is a focussed agrochemical player with complementary strengths in both manufacturing and distribution. Rallis’ key strength is its wide distribution network with over 500 dealers and 30,000 retailers and a strong farmer connect. Its net profit for the March quarter rose 25 per cent to about Rs 10 crore, while revenues rose 24 per cent to Rs 174 crore, helped by new products sales and price increases in step with rising input costs. Strong growth in its international business was a key driver of top-line growth. During the quarter, Rallis has also secured long-term contracts from its key customers with a revenue potential of over Rs 1,000 crore by FY2014. Says Patkar: “We anticipate steady growth in the domestic business. Investments in capacity expansion at Dahej coupled with additional supply contracts will boost contribution from the international business.” It’s a good pick because it has a healthy order book which gives it earnings visibility. 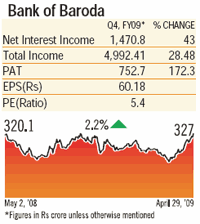 Bank of Baroda: The bank’s net profit at Rs 750 crore almost trebled in the fourth quarter, growing 172 per cent. This was a result of better than expected net interest income, higher treasury and lower provisions. The NII has expanded by 43 per cent y-o-y in Q4 FY09, driven by 37 per cent y-o-y growth in advances and expansion in net interest margin. The bank advances were driven by growth in all segments—especially, large corporates and the agri sector. The bank also maintained its CASA at 35 per cent. Says Parmar: “The results were far ahead of our expectations.” The bank has set ambitious growth targets for itself. It hopes to achieve at least a 20 per cent credit growth and 18 per cent deposit in 2009-10. It has also forecast a minimum of 20 per cent profit growth in the current fiscal. It’s a good pick because the bank appears well poised with strong growth in advances and stable asset quality. Bharti Airtel: The company rang in a robust 25.6 per cent Y-O-Y growth in top line while the bottom line grew by a decent 21 per cent. The company’s mobile business continues to be the major contributor to its growth. Net subscriber additions crossed 8 million again (8.3 million), the third consecutive quarter when the company has achieved this feat. Bharti continues to rapidly expand its network coverage across the country and invested a total of Rs 10,067 crore in capex in FY2009. This is expected to drive the company’s growth in the future. Says Agrawal: “We expect Bharti to record CAGR of 22.6 and 20 per cent in top line and bottom line respectively over FY2009-11.” It’s a good pick because the company’s extensive network along with a well-established brand should continue to pay off in future.