Equip yourself with some of the technical tools used by experts to predict stock market trends.

Sowmya Kamath
Day trading in stocks is risky, more so if you are not trained. However, if you have an eye for spotting market trends, you can make a neat pile in quick intra-day deals. There was a time when trading was a simple matter of buying and selling stocks based on one's conviction. Now, technical analysis - a discipline that enables predicting future stock trends from historical price data - has given investors new tools. "Technical analysis increases the probability of your call being right," says Abhijit Paul, Assistant Vice President, Technicals, BRICS Securities. A caveat fi rst. In day trading, no one can make the right call every time. There will be days when you will lose money, at times a lot of it.

Click here to Enlarge
Technical analysis is done on the basis of historical price movement plotted on a two-dimensional chart. One reason it has become popular is that anybody can look at the chart or graph and see how prices have moved. For example, the graph Easy Reading, clearly shows the open, high, low and closing prices of the Bombay Stock Exchange Sensex on a particular day, July 7, 2011. Similar data is available for any number of days in the past decade and even further back.

How to Pick a Stock
Large volumes and volatility of the stock chosen are a must to gain from day trading. The volume should ideally be at least 500,000 shares, and the stock should have a high beta, or volatility. This means if the index rises one per cent, the stock chosen should rise by more than one per cent. The difference between the intra-day high and the intra-day low prices of a stock should be at least Rs 10. Identifying the right stocks and fi xing a stop-loss level - a low beyond which you sell off a stock - is a must, says Paul.

Generally, stop-loss is fixed at 1.5 to two per cent, which means the stock is sold if it falls 1.5 to two per cent below the purchase price. Big traders generally fi x stoploss at about one-third of the expected profi t. For example, if they expect a stock to rise 10 per cent in three days, they set the stop-loss at a point the price falls by three per cent. Once you zero in on a stock, look at its volumes and price trends. Generally, higher volumes with higher price rise indicate an uptrend, but it should not be considered a thumb rule. "Volume is misread by a lot of people," says John Barrett, an instructor at Online Trading Academy, which teaches stock trading. Big volumes and large moves sometimes throw up big tops and bottoms, says Barrett. This means if both volumes and prices are increasing, it may be the last leg of the rally.

Stock trends
Identifying trends is important. How do you spot a trend? It is not easy, as the market never moves in a straight line. A stock will never fall continuously on a given day and rise on another. "Generally, higher highs and higher lows indicate an uptrend, whereas lower highs and lower lows mean a downtrend," says Shrikant Chouhan, Senior Vice President, Technical Research, Kotak Securities. "Look at the trend. Look at news related to the stock," suggests Chouhan. For example, if the rupee is falling against the US dollar, it is common knowledge that IT companies will gain.

Market experts take the help of various parameters to confi rm whether a stock is a trade pick. The most used are available in any technical analysis software. These include the 200-day moving average, the relative strength index, the moving average convergence divergence (MACD), the Fibonacci retracement and the candle stick price chart. The terms may sound daunting, but software available nowadays makes analysis easy.

Relative strength index: RSI compares the magnitude of recent gains to recent losses to see if an asset is oversold or overbought. RSI is plotted on a scale of 0 to 100. Generally, if it is above 70, the stock is considered overbought and so one can look to sell it. Similarly, an RSI of less than 30 indicates the stock is oversold and can be bought. In the chart, Relative Strength Index (pg 135), you can see that Larsen & Toubro's RSI was near 20 in October 2011, signalling that L&T's shares were oversold. It reversed from 20 and the stock moved up. 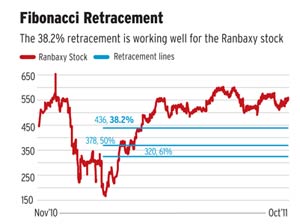