How do share prices react to stock splits? There is no fixed pattern.

Rahul Oberoi
Did you wake up one fine morning to find, while looking at stock tickers or scanning the stock quotes, that your favourite stock has nosedived? You could have been taken by surprise if you had not been tracking developments related to the company, or did not carefully read the relevant notice the company sent to you.

One of the reasons for a sharp drop in the stock price could be that the company had announced a stock split some time ago that you remained unaware of, but which has finally been refl ected in its market price. In this report we examine the mechanics of a stock split and how an investor should react to it.

Evident from the term itself, a stock split is a division of a share into shares with a lower face value. The division takes place in a way that the total market capitalisation of the stock post-split remains the same. 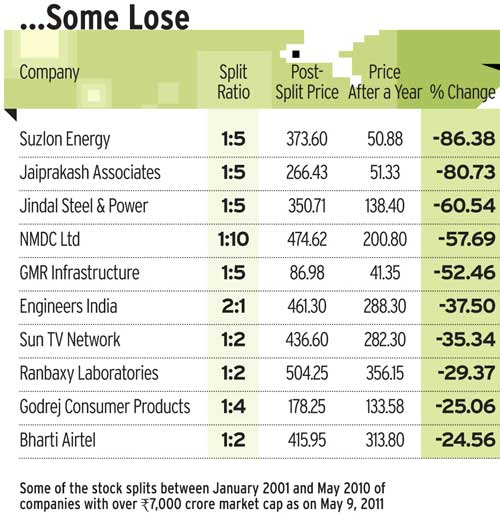 This, in effect, means the total value of your holding on the day of the split does not change as the number of shares you possess increases. After a split, new investors are often keen to buy more of the stock as it is available at a lower price. They think they will stand to gain. Is such optimism justifi ed? Maybe not. Our research on companies that went for stock splits between January 2001 and May 2010 shows that exactly half of them had moved up in the share market a year after the split, while the other half witnessed a drop in price (see Some Win and Some Lose).

Why companies go for stock splits
Stock splits are mainly carried out with the intention of increasing liquidity. Once liquidity increases, more buyers and sellers trade in the stock, which, in turn, helps to discover its true value. Lalit Thakkar, Managing Director, Institution, Angel Broking, says, "The prime intention behind a stock split is to enhance liquidity in the stock and also make the stock more affordable. This is witnessed more when the price of a stock moves up signifi cantly.

Thus, a stock split is usually resorted to by companies that have seen their share price increase to levels that are either too high or are at least much higher than the share price levels of peer companies." For instance, on August 17, 2010 the stock of Housing Development Finance Corporation (HDFC) was trading at Rs 3,011.45. The company split the share in a ratio of 1:5 and the share price closed at Rs 621.20 on August 18, 2010 (post-split). A person holding 200 shares of the company will have 1,000 shares after the stock split. Udit Mitra, Director, Research, MAPE Securities, says, "If a company's fundamentals remains robust, there will be no impact on the value of your investment, but on the trading fl oor, as more fl oating shares are available for trading, you expect market forces to determine the true price with a bigger volume. Hence, if the fundamentals are good, stock will trade up and vice versa."

What's in it for investors
If you own a stock that declares a split, the number of shares you own increases. However, the price per share reduces. This is because the market capitalisation remains the same. Market capitalisation is calculated by multiplying a company's outstanding shares by its current market price. In theory, a split should result in an increase in the number of shareholders as more investors would buy at lower prices. Avinash Gupta, Vice President, Globe Capital, says that while investors assume that there could be some benefi t resulting from an increase in trading activity and the consequent price movement, they should try to understand the objectives of the split and the potential benefi ts as well as disadvantages.

It seems that a stock split may not automatically result in benefi ts for investors who bought the split share at a lower price. One of the possible reasons for the increase in share price, if it happens, is that a stock split provides a signal to the market that the company's share price has been increasing prior to the split and people assume this growth will continue in the future. However, the key parameter to be evaluated while investing in a company which has gone in for a stock split is the valuation of the company or its underlying fundamentals. For an overvalued company, chances are that it will see a decline in its share price after a 1:2 split. Invest with care
An analysis by Money Today of companies which underwent stock splits between January 2001 and May 2010 based on their market capitalisation reveals that exactly half of them gave positive returns during the one-year period from the date of stock split. The remaining stocks gave negative returns.

"The analysis confi rms that the manner of slicing does not make the cake bigger. The price performance of the share depends on the state of the market and the fundamentals of the company once the transients settle down," adds Gupta of Globe Capital. Market experts believe that investors should look at the fundamentals of the company before taking a position immediately after a stock split. "Stock splits by themselves have a neutral affect on the price of a stock," says Avinash Nahata, Head, Fundamental Desk, Aditya Birla Money, Let us analyse the performance of two companies, ITC and Bharti Airtel, after they split their share value. The stock of ITC was split on September 21, 2005 and that of Bharti Airtel on July 24, 2009, respectively. ITC gained from the split, while Bharti Airtel suffered.