Sowmya Kamath
Consider the varying views of leading investment banks on the HDFC Bank stock, expressed earlier this year. On March 8, Goldman Sachs advised investors: "Sell with a price target of Rs 540." The same day, Bank of America-Merrill Lynch, however, suggested: "Buy with a target of Rs 600." The next day the share was trading at Rs 522. On January 21, BNP Paribas, examining the same stock, said: "Hold with a target of Rs 544." The following day, the price was Rs 488 per share.

If you happened to read all this while trying to decide if you should invest in HDFC Bank shares, what would you have done? In all likelihood, you would have been confused and done nothing. Click here to Enlarge
It is often argued that brokers issue 'buy/sell/hold' calls to generate business for themselves. The onus, therefore, is on the investor to make the best use of the information they provide in their reports. "Nobody can be right all the time and no one is wrong all the time either," says S.P. Tulsian, an independent advisor.

"It is for investors to trade wisely. They should know whose reports are accurate most of the time." While it is safe to assume that a stock which has been downgraded by several brokerages will do badly in the immediate future - or thrive, if it has been upgraded - the investor should buy or sell based on his/her investment horizon. If you intend to hold a stock for a long period, you need not bother much about these shifting ratings.

"One should check if the methodology adopted by the brokerage is absolute or relative. The investor should focus more on absolute returns from his investment over his time horizon," says Toral Munshi, head of India Equity Research, Credit Suisse Wealth Management. Depending on your investment horizon, you must decide if you want to sell, hold or buy. "Read the reports carefully. They give reasons for the rating. Act on them only if convinced," says Tulsian.

Hitting the Bull's Eye Brokerages give recommendations or ratings such as 'buy', 'hold' 'sell' or 'outperform' 'equal weight' and 'underperform', and set a target price for the forthcoming six to 18 months for a stock. The view is for a specifi ed period, but it can be altered earlier if some big event occurs that impacts the company. 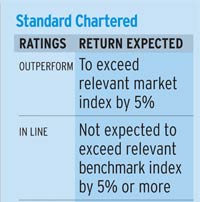 Click here to Enlarge
Reports of prestigious brokerages are much sought-after and can make or mar a stock. A downgrade from 'buy' to 'hold', or lower still to 'sell', especially by a big brokerage, can pull down a stock, while an upgrade can trigger a surge in demand.

For instance, on March 21 this year, shares of TTK Prestige, a kitchenware maker, surged over 16 per cent to Rs 3,231 on the BSE following a CLSA report recommending 'buy'. On March 28, Titan Industries fell six per cent following a Morgan Stanley decision to downgrade the stock from 'overweight' to 'underweight' and cut the price target from Rs 231 to Rs 198. But again, not always: the stock market, as is often said, has a will of its own. CLSA, on February 26, upgraded Sesa Goa from 'sell' to 'underperform' and raised the target price from Rs 185 to Rs 230. The stock, however, fell nine per cent the next day. Similarly, Morgan Stanley's March 19 report, which downgraded NTPC from 'overweight' to 'equal-weight' and reduced the price target from Rs 196 to Rs 161, did not impact the stock, which fell only 0.6 per cent.

Every brokerage has its own parameters, which investors should be aware of while taking calls based on their recommendations (see Interpreting Brokerspeak). "It is important to understand the rating methodology used," says Munshi of Credit Suisse Wealth Management.

The ratings can be relative to absolute returns, sectoral returns, or the performance of the country index. A brokerage which gives sector-relative ratings will give an 'overweight' rating, if it expects the stock to outperform the sector by a given number of percentage points. Generally, a 'buy' or 'outperform' call indicates an upside of 10 to 15 per cent or above. A 'sell' or 'underperform' rating means the stock may fall 10 to15 per cent. A hold or 'equal-weight' rating suggests that buying should be timed.

Small investors follow these reports closely. One reason for this is that they do not have enough information about companies. Most also lack the expertise to predict the impact of various events on stock prices: for example, changes in taxation or other government policies. This is where the reports help.

Reports from established brokerages give a brief analysis of each company's business, the challenges it faces and an estimate of how its earnings will grow. To make a similar assessment on his own, a small investor would have to do a lot of research. "Most people fi nd it diffi -cult to understand how of an event like the Union Budget or changes in government policies," says Tulsian.

Taking the Call
While everyone wants to invest in stocks with a 'buy' or 'outperform' rating - indicative of over 10 per cent returns - anticipated gains may not always come because of the uncertain nature of equity markets. So what should an investor do? "It is each person's call," says Munshi. If an investor takes a long-term view, he will not shuffl e his portfolio too much on the basis of brokerage recommendations.

These reports also help the reader understand the implications of various events on a company's earnings. For example, the government's directive to Coal India to sign fuel supply agreements with upcoming power plants so that these do not fall short of coal, will benefi t the plants. But existing plants will not gain. So, if the investor does not know much about the power sector, the reports can provide him basic knowledge that can help him decide which stocks may gain.