Man who transformed stock trading
When R.H. Patil, founder of the National Stock Exchange (NSE), succumbed to lung cancer on April 12, at the age of 74, India lost a titan in the world of finance. "He was a true institution builder," says Ravi Narain, current Managing Director and CEO of NSE. Patil had numerous achievements to his credit, but his biggest was the setting up of the NSE, the country's first professionallymanaged automated stock exchange, in the early 1990s. It offered a clean alternative to the Bombay Stock Exchange (BSE), then reeling under the fallout of the Harshad Mehta scam. Despite the opposition of the powerful brokers who ruled BSE, Patil made the NSE a stunning success, one which now outstrips the BSE in terms of trading volumes.

Patil, who is survived by two daughters, was Chairman of the Clearing Corporation of India Ltd, as well as of the National Securities Depository Ltd, when he died. Born in a small village near Belgaum, he went to school in Karnataka and graduated from Pune's Fergusson College before moving to Mumbai University for his Masters and PhD.

"Patil sa'ab was my foremost guru in the world of money and finance," says Y.V. Reddy, former Reserve Bank of India governor. "He inspired the highest level of trust and confidence." Friends and colleagues remember him as one who spoke little, but made a great deal of sense whenever he did. Says V.V. Desai, former chief economist at Asian Development Bank, who was with Patil at Mumbai University, and remained close to him all his life: "He was always a very cool and calm sort of person, right from his college days. He believed his work should speak for itself. He never sought attention or position. He was also very passionate about the debt market."

Before setting up the NSE, Patil worked with development financial institution, Industrial Development Bank of India (IDBI). When S.S. Nadkarni, the then Chairman and Managing Director of IDBI, asked Patil to go to Chennai as zonal head, Patil was initially reluctant. He had always been in research, culling out reports on the financial market and the economy, and never handled operations before. But Nadkarni, who saw potential in Patil, convinced him to take up the job. Though the new role demanded skills Patil had never exercised till then, he made a success of his assignment, and ended up working in Chennai for over three years. He returned to the IDBI headquarters in Mumbai as Executive Director. So too, setting up a stock exchange was outside Patil's core competence area and many doubted he would succeed. But he did. Patil's relationship with those working under him was never that of boss and subordinate, says G.P. Gupta, former chairman of IDBI and Unit Trust of India, who worked with him. "He believed we were all professionals working together," he says. 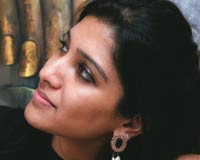 Vidya Nataraj, Co-founder, BlueStone.com
The Jewel Is Back
For four years, Vidya Nataraj headed the music division at Landmark, the retail chain promoted by her father Nataraj and aunt Hemu Ramaiah, until the Tatas acquired it. Ever since then, she nursed the ambition to return to retail on her own. The 30-year-old management graduate from INSEAD, France, has now finally done so by co-founding BlueStone.com, an online jewellery store, along with Gaurav Kushwaha, the former CEO of the online entertainment portal, Chakpak.com. "The branded online jewellery business has hardly any players," she says. Her Bangalore-based start-up offers lightweight jewellery as "that is what most Internetsavvy customers seek". Her site promises a 30-day money back guarantee. Serial entrepreneur Meena Ganesh and venture capital firm, Accel Partners, have backed Nataraj and Kushwaha with an investment of about `25 crore.

Angad Paul, CEO, Caparo Group
Far from Stupid
"People in India have changed. That's why I'm selling them luxury mattresses," says Angad Paul, CEO of Caparo Group and son of Lord Swraj Paul, the UK-based NRI industrialist. Paul was recently in Delhi to launch Caparo Spink Wade International Ltd, his group's joint venture with Harrison Spinks and Wade Furniture. He says he uses Harrison mattresses himself and is bringing the best to India, which contributes 20 per cent to his revenues. How come he heads the group, though he is the youngest of Lord Paul's three sons? "Perhaps because I'm the stupidest," he says. Frederick DeLuca, Co-founder, Subway
Nicely Sandwiched
Frederick "fred" Deluca, the co-founder and CEO of global sandwich chain Subway, can be delightfully informal. Visiting India recently, his second trip to the country, DeLuca startled his employees when, acceding to BT's request for a photo shoot outside his shop, he not only readily agreed, but also picked up a table and chair himself and strode out of the store. The chain, which has 263 outlets in India, intends to raise the figure to 1,000 in the next five years. It has 36,000 stores worldwide. DeLuca revealed he initially wanted to be a doctor, and started his first sandwich store hoping to use the profits to fund his studies. Ajay Banga, President/CEO, MasterCard
Straddling continents
In a move that could strengthen ties between the world's two largest democracies, the US-India Business Council (USIBC) has appointed Ajay Banga, President and CEO of MasterCard Worldwide, its Chairman. In his new role, Banga will seek to expand the partnership between the two countries and prepare the roadmap for a bilateral investment treaty which could increase India-US trade from $100 billion to $500 billion in the next few years. An IIM Ahmedabad graduate, Banga, brother of Vindi Banga, former chairman of Hindustan Unilever, began his career with Nestle India in 1981 before moving on to Citigroup.