Res Ipsa Loquitur (The thing speaks for itself) is an oft used term in legal proceedings. So too Harish Salve's lifestyle speaks for itself, underscoring his extraordinarily successful career.

The man who headed the team of lawyers which won Vodafone's case against the Central Board of Direct Taxes, saving the company $2.2 billion (Rs 11,000 crore) owns an apartment on New Delhi's plush Bhagwan Dass Road, and is building himself a house in the still more plush Golf Links. He has a fleet of cars, from a Bentley to a Nano, and for a couple of years worked out of the Taj Mansingh hotel, where he still has a room. A fan of Apple products, he has 21 Apple devices, 11 of them for his personal use.

"I agree I'm not inexpensive, but there are other lawyers who charge more than me," he says. But many clients would agree it is money well spent. Vodafone, for instance, arguing it was not required to pay taxes in India on its buyout of Hutchison Whampoa's mobile services, since the deal was sealed overseas, had lost its case in the Bombay High Court. But the Supreme Court, after listening to Salve and his team, upheld Vodafone's position. Vodafone is rumoured to have paid Salve Rs 60 crore.

Another equally high profile case which saw Salve triumph was the battle between the Ambani brothers over the price at which Mukesh Ambani's Reliance Industries should sell gas to Anil Ambani's Reliance Natural Resources. Here too Anil got a favourable Bombay High Court verdict, but in the Supreme Court, it was Mukesh - with Salve representing him - who won. Had Salve really charged RIL Rs 1 crore per court appearance? "I wish I had," says Salve. "I took a third of the amount."

Salve, son of N.K.P. Salve, a former Congress leader and former president of the Board of Control for Cricket in India, began his legal career in 1980 under Soli Sorabjee, who was then Solicitor General and went on to become Advocate General of India. Salve himself was Solicitor General for three years, starting 1999.

He attributes his success to three factors: strong focus on his work, a stable marriage and a quiet private life. He has two daughters, neither of whom is a lawyer. Apart from spending time with the family, he loves playing the piano and listening to jazz. His involvement in his work was clear from his response to a telephone call from friends in Mumbai, a day after the Vodafone verdict, inviting him to Mumbai for a celebratory party. According to an eyewitness, he not only turned down the invitation, but muttered once the call was over: "As if I'll leave all my work in Delhi and go to Mumbai for a party."

"He understands business," says Pallavi Shroff, Senior Partner at legal firm Amarchand and Mangaldas, explaining Salve's success. She remembers how he grasped a complex legal matter which she had gone to brief him about, in less than an hour, and argued the case convincingly in court. "He understands each case and the bench looking into the case," she adds. "And he has an original style." Salve does not disagree. "I do not read the court wrong," he says.

Sam Pitroda, Honorary Chairman, Action for India
Showing the way
Apart from heading the National Innovation Council and advising Prime Minister Manmohan Singh, Sam Pitroda, 69, is also honorary Chairman of Action for India (AFI) Forum, which recently held its first meeting in Delhi. AFI seeks to help young social innovators - those whose innovations seek to assist the poorer sections - achieve scale by providing them necessary resources. "There is great talent in our country and this is the future of India," said Pitroda, addressing the gathering of around 100 such innovators.

The internationally-renowned entrepreneur and inventor, under whom the Centre for Development of Telematics, or C-DOT, kicked off India's telecom revolution in the 1980s, is also founder and CEO of the Chicagobased C-SAM, a mobile security provider.

Pitroda paints in his free time, and says his favourite author is Mahatma Gandhi.

Kiran Nadar, Art Collector
A heart for art
"I have always loved art," says Kiran Nadar, wife of HCL founder, Shiv Nadar. For close to two decades, she has been one of India's top art collectors. Her collection is open to the public at the Kiran Nadar Museum of Art in Noida, Uttar Pradesh, where HCL's headquarters are also located. The museum recently started a branch in south Delhi as well. "What good is art if one cannot share it, which is why I display all of this," she says. She dreams of creating a still bigger and better museum such as the Guggenheim in Bilbao (Spain), or the Museum of Modern Art in New York.
-Kushan Mitra 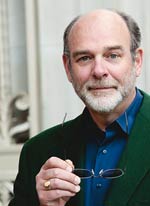 Paco Underhill, Founder, Envirosell
Retail wisdom
Paco Underhill, founder and CEO of Envirosell, a premier US-based consumer behaviour research and consulting firm, is also a retail anthropologist and author of several books. Envirosell tied up with IMRB International late last year to work together in India and Sri Lanka, advising companies on point-of-sale strategies. "I am always observing people and keep coming here for a lot of client work," says Underhill, who was again in India recently. He, however, is unimpressed by India's retail facilities. "I think India deserves better," he says. "I did go around some of the places, and I found them poorly managed."
-Shamni Pande 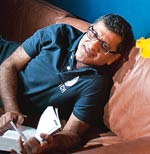 Munesh Khanna, Senior Partner (M&A), Grant Thornton India
Starting a new chapter
Munesh Khanna, 49, has joined audit and tax advisory firm Grant Thornton India as Senior Partner (Mergers and Acquisitions), quitting Centrum Capital where he was Managing Director, Investment Banking. Khanna, who earlier worked with Halcyon Group, DSP Merrill Lynch, Enam Financial, NM Rothschild and Arthur Andersen, besides dabbling in entrepreneurship, is now focused on growing Grant Thornton's business in Mumbai. where it is under-represented. Multi-tasking comes easily to Khanna, who, even as he kept answering BT's queries on telephone, dropped off his daughter at school and bought flowers for his wife. Khanna's other interests include gardening, travelling and tennis.
-Anand J. Pirojsha Godrej, CEO-Designate, Godrej Properties
Confronting realty
Pirojsha Godrej, youngest child and only son of Adi Godrej, head of the $3.4-billion Godrej Group, has been named Managing Director and CEO of the group's realty division, Godrej Properties, from April this year. He replaces Milind Korde, the current MD. An economics graduate from Wharton Business School and an MBA from Columbia Business School, Pirojsha, 31, had joined the Godrej Properties' board in 2008. "The advantage of the Godrej brand and our ability to do joint venture projects has allowed us to scale faster than others." he says.
-Manu Kaushik