The FIR heard round the world Sanjeev Aggarwal
Before he became a venture capitalist, Sanjeev Aggarwal made a fortune selling his firm Daksh eServices to IBM. Around that time he had told this magazine how his wife had doubts about him turning an entrepreneur. "After my years as a MNC manager, she was not sure this (starting Daksh) was a wise decision," he said.

That fear may have been unwarranted, but Aggarwal now claims he has lost `33 crore. Not because of any stupid business decision, but by becoming a victim of fraudster Shivraj Puri's schemes at Citibank. Yet it was Aggarwal's decision to file a police First Information Report (FIR) in Gurgaon where he accused Citibank's top brass, including global CEO Vikram Pandit, of wilful collusion in the fraud, that grabbed headlines. He was also the first investor to disclose his losses as part of the `400 crore that Puri is supposed to have sunk.
Until today, Aggarwal has had a fairly cordial relationship with the bank. In 2000, when he co-founded Daksh, Citi's private equity division, Citi Venture Capital International, invested $6 million in the company. Today, he claims he will not stop the pursuit of his money, although he has gone quiet after his initial outburst. And with his venture capital firm Helion Venture Partners managing a $350 million corpus, he really should not worry about retirement. But, we still feel Aggarwal's pain. C.V.L. Srinivas
Starting up, again
When the top headhunters were gunning for him after he quit as Asia-Pacific head of global advertising giant WPP's media agency Maxus in 2006, C.V.L. Srinivas was busy doing his own thing. "I signed up for tabla classes, travelled and wanted to figure out options as my interest lay with start-ups," he says. Life seems to have turned full circle for him. He now joins the segment he is best identified with - as Managing Director, LiquidThread, Asia-Pacific, and Chairman, Starcom MediaVest Group (SMG), India. People who know this engineer from BITS, Pilani are not surprised. After all, he quit his job at TVS to pursue management studies at XLRI, Jamshedpur and joined advertising. His mandate now is not just to build SMG's reputation in India but also pull in lucrative clients in a media buying scene dominated by GroupM. Bazmi Husain
Bazmi Husain is back to head the local operations of Swedish engineering powerhouse ABB. Best remembered for turning around ABB's automation business in India a decade ago, he was heading the giant's smart-grid business globally. ABB Chairman Gary Steel says Husain has an in-depth understanding of power and automation, besides the marketplace dynamics. That should help him fix ABB India's growth trajectory.

"Ensuring that ABB continues to be in a prime position to meet power and automation needs will be my focus," says Husain. Mammootty
For someone who once said he was a bad investor and so kept his money in bank deposits, Mammootty, born Muhammad Kutty, is donning a new role in business. Well, through an investment by his family. The Malayalam film star's daughter Surumy, son Dulquer Salman, and son-in-law Dr Mohammed Rehan Sayeed, together with a Coimbatore partner have set up Motherhood, a 35-bed birthing hospital in Bangalore. Investment: `17 crore. The birth of his two grandsons - one in the US and the other in India - showed Mammootty, 58, the quality of birthing care Indians were missing. The first baby at Motherhood was born on January 10. "A baby girl," the actor says, beaming. Kochi, Chennai and Coimbatore are next stops for the birthing chain in a Rs 58-crore expansion. For all his millions - the film press says he charges `1 crore a movie - Mammootty says he does not want to be an investor in the venture himself. Son-in-law Dr Sayeed, a cardiac surgeon with Fortis in Bangalore, is the Chairman of Rhea Healthcare, the company that owns Motherhood, and Surumy, a graphic designer by training, its CEO. Mammootty, with over 300 credits, chairs a TV channel in Kerala, but has no equity in it. The star recently started a film production house. Business, here comes Mammootty. 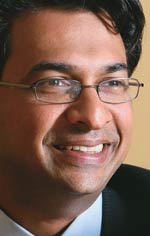 Rajan Anandan
Two years ago when Rajan Anandan featured in Business Today's list of Hottest Young Executives, he had just taken over at Microsoft India. The former top man at Dell India had gained a reputation for spurring growth, and now he finds himself succeeding Shailesh Rao as the top man at Google India. The Internet giant is already one of India's most successful Internet companies and Anandan's reputation of a digital maven precedes him. But will he be able to take Google to the next level of growth as its Android operating system gains popularity on smartphones and the country awaits a data boom on 3G networks? The Mountain View, California-based behemoth certainly hopes so.

Vijay Mallya
Old, really old whisky
Vijay Mallya made news earlier this fortnight thanks to the Indian Premier League (IPL) player auction. But as that ended, he took off his sports magnate cap and put on that of his liquor baron persona. His Airbus corporate jet was headed to Christchurch, New Zealand where he would be presented a 102-year-old bottle of Scotch whisky. Three cases of the Mackinlay's whisky were recovered last year from an Antarctic hut used by famed British polar explorer Ernest Shackleton during his 1909 expedition. The brand, which Mallya acquired when he bought Glasgow-based Whyte & Mackay, is not produced anymore and the 1909 recipe has been lost. But the hope is that the whisky could be analysed and recreated. Mallya, 55, has finally got his hands on a whisky that is a lot older than him.