Business Today brings you snippets from people who made news this past fortnight.

Here are a few people who made news this past fortnight.

Japanese carmaker Nissan has struggled to establish a foothold in India's intensely competitive auto industry. That is what Takashi Hata intends to change now. Hata, who was recently in India, admits that Nissan's growth in India has been slow and says he will see how the company can perform better. Hata came in early this year from JATCO, a Nissan subsidiary that makes automotive transmission equipment. Hata's appointment is part of Nissan CEO Carlos Ghosn's attempt to build regional leadership in important auto markets globally. Hata says Nissan will roll out more products in India. There are two more Datsun models and a few sport utility vehicles in the pipeline. Hata wants Nissan to be a major auto player in India, and not be marginalised as a one-car company. "Ours is a multi-car strategy. I would like to have a variety of products," he says. - Sunny Sen Richard Lesser CEO, The Boston Consulting Group
During his recent visit to India, Richard Lesser of The Boston Consulting Group (BCG) said that companies across the world faced growth and geopolitical risks. But the Baker Scholar from Harvard University said that evolving technology was helping companies become more resilient and navigate through the ups and downs. Lesser also points out that Indian technology companies such as Infosys, Wipro and Tata Consultancy Services had shown the way to be large global companies. The BCG's recent "Global Challenger Report" talks of companies from emerging markets that have substantially globalised, and India has 19 such companies. "My expectation is that Indian companies are very open to globalise and draw inspiration from other parts of the world," says Lesser.- Sunny Sen

HOLDING OUT FOR MORE 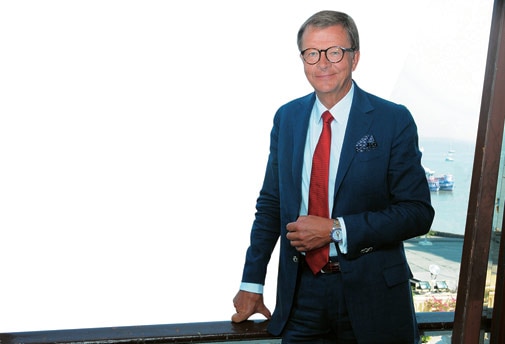 Joerg Wolle President & CEO, DKSH Holding
Joerg Wolle, who heads the $10.8-billion DKSH Holding, a Europe-based market expansion services company, is fascinated by regional businesses in India that have created great franchises both among FMCG traders and chemists. DKSH's distribution business in the country, however, is quite rudimentary. And though sales and research are two things that have been playing well with DKSH, it is time for expansion on the distribution front. Wolle, a self-confessed 'fan of India', is looking at acquisitions. He says that many regional distribution company owners in India want to protect their businesses, and aren't averse to alliances or being acquired as long as their hard work is paid for. - Suprotip Ghosh