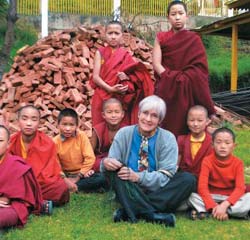 Her tryst with india started in 1969—to climb the mountains in the Kishtwar Himal, which spans across Jammu & Kashmir and Himachal Pradesh. Barbara Harriss-White Professor of Development Studies (Department of International Development), University of Oxford, has kept her India connection going for almost four decades. “A young 62” now, Harriss-White is a product of the University of Cambridge in the 1960s and has been studying India’s rural development—mostly through primary field research—since 1969. “Throughout my working life, India has been my referent,” she says. That’s exactly the reason why she was chosen to set up the Contemporary South Asian Studies Programme in the new School of Area Studies, University of Oxford.
The new programme, which also features an M.Sc. in Contemporary India (perhaps a first in the world), starts in October and has elicited worldwide interest. Says Harriss-White: “India and China are the gateways to the most dynamic part of the world economy. How they cope with the challenges of the 21st century will determine the fate of the world.” For her, the degree is the realisation of a personal dream. “It is also a project whose time is ripe. The study of China in Oxford is leading the way—about 10 years in front,” she says. Asked in which direction India’s growth story is moving, Harriss-White raises concerns like energy and (dependence on the) agro-food economy, but she firmly believes that India is headed “onwards and upward”. 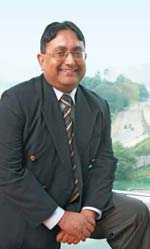 Sudip Bannerjee
On the job

Sudip bannerjee has seen the software sector grow from scratch; he will probably need his entire prowess for this new stint. As CEO of L&T Infotech, the first formidable task for Bannerjee is to take the company public, a move that has been talked about for a while now.

With the chips down for stock market at the moment, will the self-professed cricket buff face a googly? The 48-year-old former head of a division in Wipro Technologies is not deterred. Bannerjee wants to take L&T Infotech to new heights—a challenge, considering the current state of IT sector. “At Wipro, I headed just one division, but in the new job it’s the whole organisation. It’s an end-to-end responsibility,” says Bannerjee.

He can expect a happy co-incidence in his passion for cricket—considering how Indian cricket has touched new heights since the World Cup victory in 1983, the year Bannerjee joined Wipro. This soft-spoken gentleman is credited with the hardsell of Moët Hennessy and Dom Perignon, the largest selling champagnes in India. Little wonder then, the Indian arm of the Asian Pacific Breweries (APB) has roped in Ashwin Deoas the CEO from mid-October.

Deo, 42, brings with him a wealth of experience that spans the entire spectrum from spirits to beer to champagnes, cognacs and wines. A joint venture with the Jaipuria Group, APB has started bottling the popular Tiger Beer from Singapore in India.

Deo has had an assortment of stints at leading alcohol majors such as LVMH’s Moët Hennessy India, UB Group, UDV and Foster’s India. Though Deo was unavailable for comment, he is said to be a keen listener of Indian classical music and has been an All India Radio artiste (he plays the tabla) since the age of 12. This eclectic mix sounds just right for the job.

Mick Gordon
For the long haul

Market research firm synovate has a new man aT the helm in India. Mick Gordon, 43, has taken over as the new Managing Director. Before this, he was the head of business services for the firm in the United Kingdom. Based in Mumbai, Gordon will report to Synovate’s CEO for South Asia, Tim Balbirnie.

With a career in market research spanning 12 years, one of his first tasks is to “build a deeper understanding of the Indian business environment and the challenges it presents”. India is a priority market for Synovate. To this end, Gordon will develop and implement a comprehensive fiveyear plan to optimise growth in the India market. “We now have rock solid credentials in operations, client relations and research across the team,” Balbirnie, said in a statement to announce Gordon’s appointment. When he is not busy putting market research to good use, Gordon likes to play or watch soccer and cricket. Though one of the immediate concerns for the father of two is getting his children adjusted to the new environment as he is in India “for the long haul”. 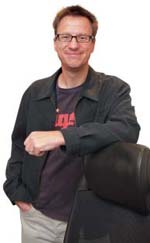 On his first visit to india, ray king, group chief executive of uk-based health and care company Bupa, is impressed with the country—its numbers and the interesting possibilities that they present for his company.

Here to sign on the dotted line for Bupa’s health insurance joint venture with the Max Group, King, 54, believes there is a sense of optimism that permeates the country. “It is the very can-do attitude of the people that came across quite strongly,” he says.

And that really translates into business rationale for King, who moved to the top job in Bupa earlier this year. He plans to be back soon with an added agenda. “My wife is very keen on international travel. Next time when we are here, we will visit the Taj.” Clearly, his Know India plan is on track.