People who made business last fortnight

Lakshmi Pratury, Founder, The INK Conference
Good Thinking
Lakshmi Pratury is the founder of The INK Conference, a three-day event which brings together thinkers from diverse fields - ranging from social anthropologists to music innovators. This year's conference will be held in Kochi, Kerala, at the end of October. Though the meet focuses on integrating youth, there is no age barrier for participants. It also highlights new skills and innovation. INK began after Pratury brought TED (Technology, Entertainment, Design), a New York-based non-profit devoted to "ideas worth spreading", to India in 2009. She realised that such conferences needed to be held in India regularly to tell the country's many stories. "I was working in Intel for many years and learnt how you can use events to change perception," she says. "I wanted to do something that tells the story of India in a very different way." For one so cerebral, she is curiously coy about her age. "How does it matter when the mind is ageless," she asks.
-Goutam Das 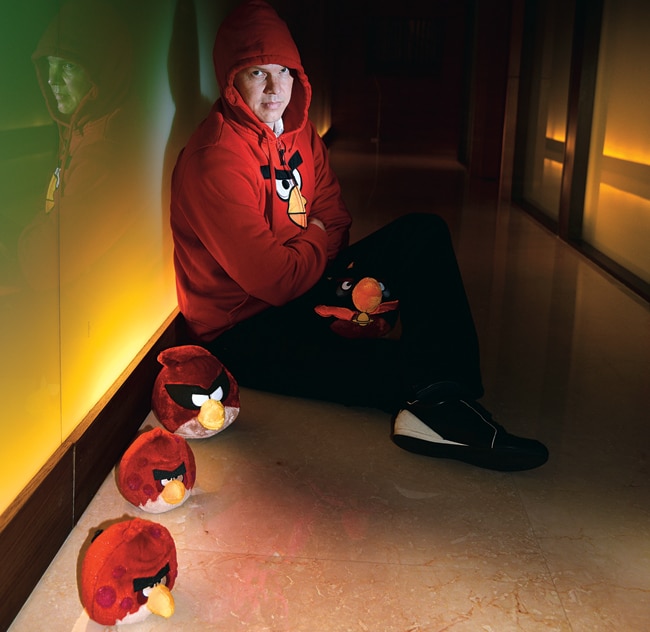 Henri Holm, Senior VP (Asia), Rovio Entertainment LtdPhoto: Vivan Mehra/www.indiatodayimages.com
Migrating a Long Way
Angry Birds has landed in India, literally so. "This is our new home market... We have a deeper integration with the fans, the market place and the partnerships," says Henri Holm, the man tasked by Finnish entertainment media company Rovio Entertainment Ltd to take the popular Angry Birds franchise much beyond smartphones and tablets in Asia. So, apart from the millions of Angry Birds games being downloaded every month, there will soon be Angry Birds merchandise, activity parks and even an Angry Birds Playground, a "fun way of learning" for pre-schools. Holm, however, thinks the game changer, especially in India, will be the new video distribution platform inside the game. "This is a new way of consuming media and we are at the heart of this change. We will have high quality games and animation content," he says.
-Nandagopal Rajan Humza Yousaf, Scottish Minister for External Affairs and International Development Photo: Nishikant Gamre/www.indiatodayimages.com
India-blended Scot
At 28, Humza Yousaf, is already Minister for External Affairs and International Development, Scotland, and keen to strengthen the relations between Scotland and India, especially in the areas of education, innovation and renewable energy. A member of the Scottish National Party, he paid his maiden visit to this country, the land of his ancestors, recently, where he facilitated the signing of a number of agreements between India and Scotland. In his free time Yousaf listens to anything and everything that sounds good, be it the Grammy-winning British band Coldplay or traditional Scottish Gaelic music.
-Arpita Mukherjee Apurv Bagri, MD, Metdist GroupPhoto: Rachit Goswami
Global Indian Comes Home
A taxi driver in China once told Apurv Bagri: "We Chinese work a lot harder than you Indians. But, you are a lot smarter than we are." Bagri, Managing Director of Metdist Group, the London-based metals trading company founded by his father Lord Raj Kumar Bagri, agrees. Metdist is now looking at investing in India, seeking acquisitions and diversification. Bagri, who still holds an Indian passport and visits India frequently as a "travelling Indian", is upbeat about the country's growth prospects. He says India is on the cusp of economic opportunity in terms of human capital. "By 2015/16, India will surpass China in terms of the largest number of working people. And, over the next decade, between 15 to 20 million young Indians will enter the workforce," he says, adding that the biggest challenge is to use that opportunity well.
-Arpita Mukherjee Faisal Husain Founder,Global CEO, Synechron Photo: Rachit Goswami/www.indiatodayimages.com
In Sync
Faisal Husain, along with  comrades-in-arms Tanveer Saulat and Zia Bhutta, has spent the last 14 years  building Pune-based IT firm Synechron a base in the US. From a consulting start-up it is now a $200-million-plus firm, employing over 4,500 people. So, what keeps bringing him back to India? "We are seeing more and more top managers asking for help on very specific management issues," says Faisal, who counts Edelweiss among his clients in India. Synechron, in fact, acquired the Amsterdam/Singapore-based Double Effect back in April to bring together management and technology consulting for financial firms. Apart from his work Husain, 39, loves Bollywood music - indeed, he first picked up the guitar because he wanted to play the hit song Jadoo Teri Nazar from the film Darr.
-Suprotip Ghosh Krish Ramakrishnan, Co-Founder/CEO, Blue Jeans Network
Video Conference Virtuoso
Two of Krish Ramakrishnan's earlier ventures were acquired by US multinational Cisco Systems. But with the third, he could well give the behemoth a run for its money. Co-founded in 2009, Blue Jeans Network first made waves when it was able to raise $23 million in two rounds, getting the backing of venture capital firms such as Accel Partners, Norwest Venture Partners and New Enterprise Associates. The company's name is intended to signify that the service  it provides is versatile, hard-working and functional - just as a pair of denims are.  Today, Blue Jeans manages over half the 200 million minutes of video conferencing the world does every year. "We solved the lack of interoperability, brought in ease-of-use and opened up video conferencing beyond internal systems," said Ramakrishnan in a video conferencing hosted from Silicon Valley over his network.
-Nandagopal Rajan