Angela Ahrendts
At six feet three inches in her stilettos, Angela Ahrendts towers over most people around her. She also towers over Burberry, the London fashion house renowned for its distinctive tartan patterns, having pulled the company out of the troughs of the 2008 downturn. In the year to March 2010, Burberry revenues grew by seven per cent to 1.28 billion pound (Rs 8,900 crore), with a profit of 82.2 million pound, against a loss a year earlier.

Recently in India to meet with her new JV partner Genesis Colours, it's been a long way from home for the girl from New Palestine, Indiana. She had a childhood dream of working for one of the big fashion houses in New York and the day after she graduated from college in 1981 she moved to New York City.

She got her big break in 1989, when she joined designer Donna Karan's eponymous company, before making her way to the top at Burberry. In India, she sees a large market for the British brand, "With our digital strategy we also want to target the younger luxury consumer who had a different perception of the Burberry brand. The digital strategy has been good for us."

Along with Chief Creative Officer Chris Bailey, she piloted a move to live-stream Burberry's 2011 Spring-Summer collection online and followed that up with with an iPad application. Burberry's Indian operations, which started after Ahrendts took over as CEO, have now expanded to five stores with three more to follow early this year. This might be the first of many visits for this fashion industry queen.
-Anusha SubramanianA search ends

Uday Sodhi
When ABC Consultants, a New Delhi-based recruitment services firm, decided to put in place a portal for middle- and senior-level job seekers, the management decided to rope in Uday Sodhi as Chief Executive. And with good reason, as Sodhi is an Internet veteran. Explaining his latest role, at HeadHonchos, Sodhi says: "Executive search is a vertical, but it is an Internet business for me." The idea behind the portal is a specialised product for middle- and senior-level job seekers with 10 to 15 years of experience. With the job market growing rapidly now, he can surely hope for a lot of action in the coming months.
-Saumya BhattacharyaIt ain't over… 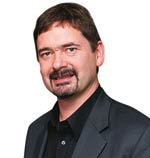 Jon S. von Tetzchner
Opera might have been squeezed out of the battle for web browsers on desktop computers but the Norwegian company is making a strong comeback on the all-pervasive mobile phone. "In countries like India, the mobile phone is the primary access point to the online world and Opera offers an easy, cost-effective way for mobile users to surf the web," says Jon S. Von Tetzchner, in India for a summit on the future of the world wide web in this country. He does not believe the contention that native applications rather than the Internet will rule. "With so many platforms competing in the smartphone arena, developers cannot keep up. The Internet, on the other hand, is just one platform." Far from going extinct, von Tetzchner feels that Opera will rule the web.
-Kushan MitraBlue-eyed CEO Pavan Vaish
International Business Machines, better known as IBM, which pulls in some $50 billion in software service revenues every year, owes Pavan Vaish big time. He not just co-founded Daksh e-Services, IBM's entry vehicle for India-based business support services of scale, he also shepherded the unit as its CEO after Big Blue acquired it in 2004.

Today, the unit has over 30,000 employees and an estimated $600 million in revenues. Vaish stepped down in mid-December, making way for IBM veteran Pari Sadasivan, who will take over the reins at the unit, rebranded IBM Global Process Services. Vaish, whose first job was as a physics teacher at The Doon School, his alma mater, will stay on until February, IBM said. His plans for the future are not public but be sure you will hear more about this alumnus of IIT Kharagpur and Stanford.

Sanjeev Aga
In a career spanning close to four decades, Sanjeev Aga has managed businesses in paints, suitcases and even toys. But, undoubtedly, the role that he will be remembered for is in the mobile telephony sector. That of taking the hodge-podge (Aditya) Birla-Tata-AT&T combine, which had the fond, if deprecating, moniker of 'Batata' (the Marathi term for potato), and folding it into the Aditya Birla group under the Idea brand as well as running a highly successful public offering.

Recently, he has taken a lead in the spectrum battle with his erstwhile corporate partner, the Tatas, as chairperson of the Cellular Operators Association of India. His decision to hang up his boots at the end of the current financial year will leave the telecommunications world in India a lot poorer.
-Kushan Mitra
Still apologising

Akio Toyoda
Akio Toyoda might have seen through the irony of his company's Indian operations selling its new Etios using "Q for Quality" as a byword. At the launch of the most important vehicle Toyota has brought to India, Toyoda, the grandson of company founder Kiichiro Toyoda, was profoundly apologetic when queried about the disastrous series of recalls the company had to endure in late 2009 and early 2010.

However, he believes that Indian consumers will get a Grade A product. "Our engineers have worked very hard on the new Etios and tested it thoroughly. I believe the car that we are going to sell will meet the standards demanded by Indian consumers."

Whether that will happen is yet to be seen, but Toyota India has gone into overdrive to push the car, aided by aggressive pricing. Will the Etios manage to firm up the company's reputation in India where its main competitor for the global top spot, Volkswagen, has already got off to a flying start?

But Toyoda, who took charge of the company in 2009 after a series of missteps during the global financial meltdown, which indirectly led to the recall crisis, must he hoping that he can stop apologising soon.
-Kushan Mitra