Ronnie Screwvala, Founder, UTV Group
Once more with feeling
Ronnie Screwvala has done it again. He will be selling his balance 19.8 per cent stake in UTV to The Walt Disney Company, or TWDC. A shrewd businessman behind his affable exterior, Screwvala has developed a pattern of launching business ventures, incubating them up to a point and then selling them at the right time. In the past, Screwvala followed the strategy with the Tamil language Vijay TV, which he later sold to STAR India, and then Hungama TV to TWDC. While Screwvala will lose control of UTV, the bigger development is that he will now become Managing Director of TWDC India.
-Anusha Subramanian Omar Abdullah, Chief Minister, J&K
Peace and quiet
Omar Abdullah, Chief Minister of Jammu & Kashmir, must be a relieved man. Summer 2011 has been a peaceful one - so far - for the Valley. A record number of tourists have visited the state - 750,000 this summer. The German foreign office withdrew an advisory against travel by its citizens to the Valley. Government schools are organising science fairs for the first time in many years, and teachers are showing up for training. Companies such as Wipro are identifying graduates and postgraduates under a skills upgradation and employability programme. Yet, no one wants to give credit to Abdullah for the calm. He has, however, won approval for his caution in making statements in contrast to last year.
-Puja Mehra 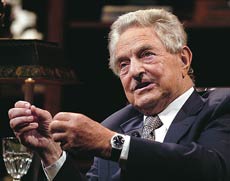 George Soros, Billionaire investor
No more speculation
His career as a hedge fund manager spanned more than four decades. Now, in a move that completes his transformation from speculator to philanthropist, George Soros will be returning around $1 billion to outside investors in his $25.5 billion firm by the year-end. Soros Fund Management will now focus solely on managing the assets of Soros and his family, says a letter to investors. It is widely believed that the new US Securities and Exchange Commission disclosure rules are responsible for Soros's latest move. 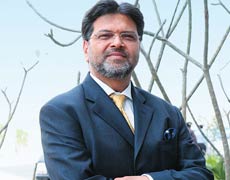 Rajesh Srivastava, CMD, Rabo Equity Advisors
Betting on food
After netting some good catches in the agricultural space with its $120 million India Agri Business Fund, Rabo Equity Advisors is now aiming for a bigger fund of at least $250 million. Says Rajesh Srivastava, 54, Chairman and Managing Director, Rabo Equity Advisors: "The increase in size is due to the scaling of food and agri companies, justifiable growth plans, higher valuations and our appetite for bigger stakes." The confidence comes from having had a good run on the first fund, 80 per cent of which will have been exhausted by the time the second fund is launched. Though the fund has had no exits so far, Srivastava is optimistic. "We are in the midst of one profitable exit and one second round infusion expected to give a large mark up," he says. Now isn't that a perfect recipe? We are waiting for the pudding.
-Shalini S. Dagar Devendra Chawla, Private Brands Head, Future Group
Future bright
Some key changes are afoot at Future Group, with Kishore Biyani's ace team member Devendra Chawla, Private Brands Head, Future Group, now also in charge of Food & FMCG. Chawla, 39, is no stranger to success. He made heads turn when he became Coca-Cola India's youngest Area Operations Director at the age of 32 and then within two years a National Director of the company. He then joined Reliance Retail as Vice President. At Future Group, Chawla has launched five private brands in just over two years - including a co-creation with Sachin Tendulkar called 'Sach'. So what if competitors' enthusiasm for private brands is flagging. Chawla is gunning ahead.
-Shamni Pande

Gilbert Ghostine, President, Asia Pacific, Diageo
Having fun at work
Heading the hottest market at the world's largest liquor company by revenues must be a great job. Gilbert Ghostine admits that work is fun. In Delhi recently to celebrate, among other things, the relaunch of Johnnie Walker Blue Label, one of the top Scotch whisky blends, he was also fascinated by how Indians were now drinking better. "As disposable incomes and opportunities to spend increase, you see more and more Indians trying out new drinks and better drinks," he says. Ghostine's visit was intended to promote something more as well - responsible drinking. "You should drink to enjoy your drink and the time you spend on it. Driving after drinking is a stupid idea," he says.
-Kushan Mitra