Aamir Khan, Actor/Producer
Lure of the small screen
Come 2012, Aamir Khan will finally follow in the footsteps of Amitabh Bachchan, Shah Rukh Khan and Salman Khan. He, too, will host a TV show. But no, unlike that of the other actors, his will not be a game or quiz show. "It is difficult to explain what it is about," says Khan at first. The reticence soon dissolves into candour, but only that much. "It is a personal journey for me to connect with the millions across the country and tell their stories," he adds. "It is about how our lives are affected on a daily basis. It tells real-life stories and is all about change and hope." Produced by his own company, Aamir Khan Productions, the show will air on Star Plus. It will be simultaneously broadcast in all the languages Star Plus runs channels in: Hindi, English and six regional tongues.
-Anusha Subramanian 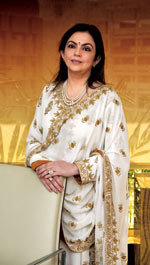 Nita Ambani Additional Director, EIH
India Inc.'s first lady checks in
Nita Ambani , wife of Mukesh Ambani, Chairman and Managing Director, Reliance Industries, or RIL, has joined the board of East India Hotels, or EIH, as an Additional Director. RIL bought a 14.12 per cent stake in EIH, which owns and runs hotels under the Oberoi brand, for Rs 1,021 crore a year ago. With this step, Nita, who already oversees RIL's ventures in education, health care and sports, and also handles the group's philanthropic activities, adds the hospitality sector to her responsibilities. She is founder and Chairperson of the Dhirubhai Ambani International School in Mumbai and co-owner of Mumbai Indians, an Indian Premier League cricket team. But her dream projects remain the H.N. Hospital and Reliance University, both in Mumbai. Nita's favourite quote: "It is not what you possess, but what you do with what you have that determines your true value." (See The Most Powerful Women in Indian Business, BT, September 18, 2011.) She attributes her passion for education to her middle-class upbringing.
-Gautam Aggarwal 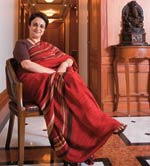 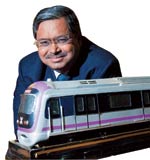 Narayanan Sivasailam, MD, Bangalore Metro Rail Corp
The Other Metro Man
October 20 was a special day for Narayanan Sivasailam, Managing Director of the Bangalore Metro Rail Corporation. On this day, years of hard work finally came to fruition as the Bangalore Metro - the third in the country after Kolkata and Delhi - opened along a 7.5 km stretch. This Metro also has one feature its counterparts in the other two cities do not: Wi-Fi connectivity on board. A Delhi College of Engineering alumnus and a 1985 batch IAS officer, Sivasailam, who took charge of the project in June 2008, has only one regret. He wishes his parents, whom he lost recently, had been around to witness his triumph. "They followed the Metro's progress so closely during their lifetime," he says.
-K.R. Balasubramanyam Kavin Mittal, Head, Strategy, BSB
New generation connect
Kavin Mittal, one of the twin sons of telecom czar Sunil Bharti Mittal, runs Bharti Enterprises's new age businesses - social media, gaming and e-commerce - as Head of Strategy and New Product Development at Bharti SoftBank Holdings, or BSB, a joint venture with the eponymous Japanese company. Kavin's twin brother, Shravin, is a manager at Bharti Airtel's African operations. Kavin, 24, who holds a Masters degree in engineering from a London institute, says he made his first foray into entrepreneurship while still a student. "I became an entrepreneur at the age of 20 in my last year at university when I launched a start-up, AppSpark, in the mobile Internet space," he says. He also admits to a love of adventure: he enjoys skydiving, bungee-jumping and is now training for a pilot's licence. Will he take Airtel to greater heights? "I have a lot on my plate at the moment and all I can say is that for now I am focused on BSB," he says.
-Sunny Sen