People who made news in the last fortnight

Sameer Shariff, CEO, Impelsys
Ruling Britannica
Dwindling print sales led to the print version of the 244-year-old Encyclopaedia Britannica suspending publication last month. Britannica's online version, however, begun a few years ago, flourishes. Few are aware that playing a vital role in the growth of the online edition is Bangalore-based Sameer Shariff. He is the founder and CEO of Impelsys, the online content delivery company which built a platform for the delivery of eBooks to Britannica's global library market.

Many reference books and journals are now available digitally and accessed by state libraries in the United States in their digital version, rather than being stocked in print form. The libraries subscribe to these publications, and Impelsys, which has prepared the platform for many such books, pockets a percentage from each subscription.

"The closure of Britannica's print version is an example of what's happening in the industry," says Shariff. "All publishers are challenged by declining print sales. They need to rejig their business models. People are consuming more content digitally as devices proliferate." Shariff, who graduated from Wharton school in the US in 1995, still preserves an ATM withdrawal slip from that year, which shows his bank balance as $1.99. But he had the heart of an entrepreneur and despite his relatively-prosperous state today, says proudly: "I never worked for anybody." His first venture was Medsite, an online pharma marketing firm, which he made such a success of that it was acquired by WebMD in 2006 for $40 million. His second venture, begun about a decade ago, was Impelsys.

This one, however, had an initially bumpy ride. It finally broke through in 2008 with the formula of creating platforms for publishers delivered over the cloud. Impelsys now has 100 publishers among its clients, including McGraw Hill, Sesame Street, the MIT Press and Harper Collins, who use its platform called 'iPublishCentral' to market, distribute and deliver content to different devices. The platform, hosted remotely by the company, has software and applications to manage the workflow of the publisher.

"Now we can scale because we have demonstrated the platform works," says Shariff. Impelsys's growth has been sharp: it earned around $10 million in revenues, having grown 2000 per cent in its transactions business in the last financial year alone. Rob Rees, Chef
Taste of Britain
There is more to British cuisine than fish and chips. Rob Rees, one of Britain's leading chefs, proved it during his recent visit to New Delhi, Hyderabad and Bangalore. Indeed Rees also prepared a 'Taste of Britain' menu for the gala dinner at the India Today Conclave in the capital on March 17. There is more to him than his culinary skills as well. A entrepreneur with a heart, he employs physically challenged chefs at his restaurant back home, Star Bistro. He is also a campaigner for nutritious food and scorns burger joints. Britain and India, he feels, can cooperate in the food business. "The UK has quality farming, good education for chefs and great processes, cheese making, for instance," he says.

"There is also lot to share around how we are managing nutrition in our schools." U.V. Singh, Member, Justice M.B. Shah Commission
These were the two key men behind stopping illegal iron ore mining in Karnataka's Bellary district. Uday Vir Singh, 54, a 1985 batch Indian Forest Service officer led the 30-month long probe into the mining, and prepared a 25,800-page report which revealed the names of bureaucrats, politicians and companies benefitting from it. But the report may have gathered dust were it not for Sangayya Rachayya Hiremath, 68, an out-ofthe-box activist steeped in Gandhian thought, who brought the Supreme Court into the picture. He filed a public interest litigation in the highest court which, after its hearings, ordered the suspension of all private mining activity in Karnataka. Singh is now a member of the Justice M.B. Shah Commission, which is investigating mining irregularities across India. 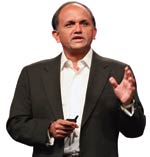 Shantanu Narayen, CEO, Adobe Systems
Media software Czar
He is the only Indian chief executive of a top Silicon Valley company. Not surprisingly, Adobe Systems, the company Shantanu Narayen heads, is doing so much work out of India. "It is our Noida campus that is building the software tools that allow media companies to help create content as well as to monetise it," he says. Born and educated in Hyderabad, Narayen, who is refashioning Adobe into a company which powers content creation and distribution, says the way media is being consumed is changing drastically, "and media houses across the world are finding their own unique answers to their problems". The advantage for Indian media companies? "They can see what others have done."