Shahabuddin Yaqoob Quraishi, 64, the current CEC, is no different. His clashes with Law and Minority Affairs Minister Salman Khurshid and Steel Minister Beni Prasad Verma for their alleged violation the code during the justconcluded campaign for the Uttar Pradesh assembly elections, were the stuff of front page newspaper headlines for days. He even complained to President Pratibha Patil against Khurshid. His face-off in January with Punjab Chief Minister Prakash Singh Badal, who accused EC officials of exceeding their mandate, only to be sharply rebutted by Quraishi, was equally high profile.

An initially defiant Khurshid later apologised for the speech - promising a nine per cent subquota for 'backward minorities' - Quraishi had objected to. Curiously, this was the second recent face-off between Quraishi and Khurshid. Earlier, Quraishi had complained to Prime Minister Manmohan Singh that a remark of Khurshid's in a television interview was an attempt to undermine the EC's authority. Khurshid had said every institution was under some sort of government control, citing the example of EC officials having to take the law ministry permission for foreign tours. Singh assured him there was no such intention.

Quraishi's critics, however, maintain his strictness has sharp limits, and that he did not go far enough in the Khurshid case. "He should have debarred Khurshid from further canvassing," says Bharatiya Janata Party leader Shahnawaz Hussain. Others insist the CEC has never confronted the most senior leaders of the government.

Quraishi did not respond to Business Today's request for an interview. An alumnus of St Stephen's College, Delhi - an alma mater he shares with Khurshid - Quraishi, joined the IAS in 1971 and was assigned the Haryana cadre. He is a rare CEC in that he has observed the electoral process from the bottom up, having been a returning officer during the then newly created state of Haryana's first assembly election in 1972. In a 35-year-long IAS career - ending in June 2006 when he joined the EC, rising to CEC in July 2010 - he has held a number of key positions, including that of Union Health Secretary and Director General of National AIDS Control Organisation.

Alongside, Quraishi has also found time for academic pursuits, acquiring a Ph.D for his thesis on The Role of Communications and Social Marketing in the Development of Women and Children, writing a book Old Delhi: Living Tradition, that mixes history and sociology, as well as several papers on the socio-economic situation of Muslims, and the AIDS problem. He is fluent in several languages, including German, Persian and Arabic. Quraishi has two children, a son and a daughter.
-Anilesh S. Mahajan

Vikram Gandhi, Founder, VSG Capital
Banking on self
He took an eight-month break after a two decade career as an investment banker with marquee names such as Morgan Stanley and Credit Suisse. "The family saw much more of me," says Vikram Gandhi 49, father of three grown-up children, grinning. Now, Gandhi has floated his own advisory venture, VSG Capital. "The focus will be on M&As and investment advisory," he says. His fledgling firm has already won one big client in the form of Canadian Pension Board, with a fund size of $152 billion. "I'll be advising them on India investment," says Gandhi. "A lot has changed in the Indian corporate sector. There are many Indian multinationals with bigger global ambitions." An alumnus of Bombay University and a chartered accountant, Gandhi has an MBA from Harvard Business School, and is an avid golfer. "I've a keen interest in developmental work," adds Gandhi, who was on the board of the US-based Grameen Foundation for over five years. He was recently inducted into the governing council of the $1-billion India Inclusive Innovation Fund.
-Anand Adhikari

Romesh Wadhwani, Founder, Wadhwani Foundation
Starting up India
Romesh Wadhwani may be 63, but the serial entrepreneur and Chairman of Symphony Technology Group, who graduated from IIT Bombay, still has the spirit of a young man. Some years ago, his Wadhwani Foundation launched the National Entrepreneurship Network to help start-ups get going. Wadhwani feels India has yet to acquire the kind of 'start-up culture' countries such as the US have, and to do so, "the government has to help" by at least reducing the number of licences required to begin work. For a man whose first business was a canteen of sorts at IIT Bombay hostels that was shut down due to lack of permissions, that will be some endorsement.
-Kushan Mitra 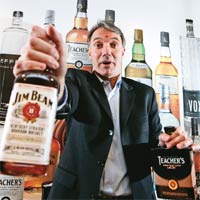 Matt Shattock, CEO, Beam Inc.
Sweet Spirit
American premium spirits company Beam Inc.'s Teacher's brand is perhaps the most popular Scotch brand in India. CEO Matthew Shattock, a former British tank troop commander, believes the company's India future is literally sweet. "We perceive a slightly sweeter palate in India. This will lend itself in coming years to Bourbon (North American whisky), which has a slightly sweeter taste to it," he says. In fact, Shattock's team has spent the last six months innovating to meet this very 'Indian' demand. The company recently launched the first ready-to-drink canned Scotch: a mix of Teacher's whisky and cola. "This is an innovation that came from India," says Shattock, whose routine includes savouring spicy Indian food every Friday.
-Manasi Mithel 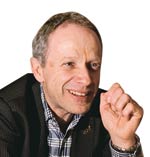 George Keune, CEO, Keune Haircosmetics
Hair again
"Indian women have beautiful hair. They look as if their hair has been photoshopped,'' says George M. Keune, CEO of the 90-year-old family-run Keune Haircosmetics, the Dutch cosmetics major with strong presence in Europe, US, Brazil and Taiwan. He was in India recently to relaunch his company's products, catering to the professional salon segment. "The company entered India six years ago, but the choice of wrong people hurt our performance," adds Keune.
-N. Madhavan