Boris Becker, Ex-Tennis Champ, Brand Ambassador <em>Photo: Aditya Kapoor/www.indiatodayimages.com</em>
Boris Becker
Ex-Tennis Champ, Brand Ambassador
Fresh Serve
Playing tennis was the 'business' of five-time Grand Slam champion Boris Becker, nicknamed 'Boom-Boom Becker' because of his powerful serve. But since 2000, Becker has moved on from tennis and explored many other opportunities - the Boris Becker Tennis Brand, Boris Becker TV, an online portal, and three Mercedes Benz dealerships. Recently, he was in India for the launch of the German luxury car maker's top-end sports utility vehicle, the GL. Becker, who was the youngest ever to win the men's singles title at Wimbledon at the age of 17, bought his first Mercedes, a 190E, in 1985. "All sports have a time limit and you need to redefine yourself," says the champ. Sashwati Banerjee MD, Sesame Workshop India Photo:Vivan Mehra/www.indiatodayimages.com
Sashwati Banerjee
MD, Sesame Street Workshop, India
Open Sesame
Sashwati Banerjee, Managing Director of Sesame Street Workshop India, is a woman on a mission. Eight months ago, she started Sesame Street Preschool Centres in seven schools, and plans to scale up the effort to 40 schools in 10 cities by March 2014. Sesame Street Workshop works in over 150 countries, providing educational and early childhood development services for children aged two to six years. Banerjee says she believes that for India to develop a global workforce, its children must learn to apply their minds rather than learn by rote. She is starting a new project in collaboration with the Bihar government called 'Learn to Read, Read to Learn'. This will help 40,000 children in 375 schools develop reading skills and speak fluent Hindi. She is also working with the Gujarat and Uttarakhand governments to promote basic practical learning methodologies. Shashi Kant Sharma, Comptroller and Auditor General of India Photo: Parveen Negi/www.indiatodayimages.com
Shashi Kant Sharma
Comptroller and Auditor General of India
It is a sign of the times that soon after Shashi Kant Sharma was appointed Comptroller and Auditor General (CAG) in May, the Supreme Court agreed to hear a PIL challenging his appointment on the grounds of "conflict of interest". Sharma, 61, is a Bihar cadre Indian Administrative Service officer who spent almost eight years in the defence ministry. He was Defence Secretary from July 2011. Defence - particularly arms procurement - is where the CAG is likely to face its most challenging audits, raising the question whether Sharma might find himself in a delicate situation when the audit covers his tenure there. That is not Sharma's only challenge. He replaces Vinod Rai, who raised the profile of the CAG, until then a low-key audit watchdog, so that it came to be seen as an institutional bulwark against corruption. Media reports claim Sharma was chosen in the hope his reputation of going by the book would restore balance in the CAG's relationship with the government. Latif Nathani, MD, eBay
Latif Nathani
MD, eBay
Clicking with Consumers
Almost 68 million Internet users visit e-commerce sites in India every month, but only 14 million actually shop there. It is this gap that Latif Nathani, the newly appointed Managing Director of eBay India, hopes to plug. "We spend a lot of time thinking about the triggers and barriers in the consumer's mind to help them make the leap," he says. With over 22 years of experience in companies such as Microsoft and Symantec, Nathani wants to see eBay benefit more from, and increase its impact in, India. Into its eighth year in India, the e-commerce portal already connects 30,000 local merchants to five million consumers all over India. Nathani thinks competition from players such as Flipkart is good, as it "allows the market to expand and the ecosystem to thrive". With mobile being seen as the big driver for e-commerce in India, Nathani says, eBay will focus on greater penetration of its mobile apps. A selfconfessed "Bollywood buff" and foodie, Nathani likes to travel and read nonfiction in his free time. Varun Berry, COO, Britannia Industries
Varun Berry
COO, Britannia Industries
Berry Good Choice
Textile-to-aviation entrepreneur Nusli Wadia has entrusted the India business of his biscuit giant, Britannia Industries, to Varun Berry, the company's Chief Operating Officer. Berry's designation will not change, but the company has made it clear that Managing Director Vinita Bali, who trebled Britannia's revenues in seven years, will now focus only on the overseas business. Berry, an engineer and management graduate, joined Britannia in January. He has 27 years of experience, and earlier worked with the likes of Hindustan Unilever and PepsiCo. Says Wadia: "We are preparing for high growth in Britannia's India operations." 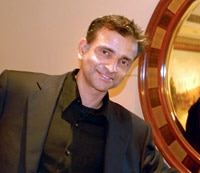 Vivek Ranadive, Chairman and CEO, TIBCO Software Photo: Vivan Mehra/www.indiatodayimages.com
Vivek Ranadive
Chairman & CEO, TIBCO Software
Good Sport
San Francisco-based entrepreneur, author, speaker, philanthropist, tech visionary and occasional sports coach Vivek Ranadive donned a new hat when he bought a 65 per cent stake in the US-based basketball team Sacramento Kings for $347 million. Twenty-two years after he left India at the age of 17 with $50 in his pocket, Ranadive founded the $4-billion TIBCO Software. He is said to be overhauling the 68-year-old NBA team, which has been faring poorly. His interest in basketball started when he coached his daughter's school team. An MIT and Harvard graduate, Ranadive was involved in digitising Wall Street in 1980s. He has a black belt in taekwondo.

Note: The print version of this item erroneously stated that Varun Berry had been made Managing Director. That is not the case. Vinita Bali continues to be MD.