Niklas Frisk, VP & Head of South Asia/MD India, Oriflame <em>Photo: Vivan Mehra/www.indiatodayimages.com</em>
Makeover Master
Before joining Oriflame's India office last year, Niklas Frisk, its Vice President, Head of South Asia, and Managing Director India, personally examined the company's range of lipsticks and skincare products at its R&D centre in Dublin, Ireland. "If you have attractive products they will sell," says Frisk. He has drawn up plans to grow the India business, which already figures in the top 10 of the 60 markets where the Swedish cosmetics major operates. Oriflame recently tied up with leading fashion designer Ritu Kumar to launch accessories such as stoles, handbags and wallets. Though the Delhi traffic upsets him, Frisk is otherwise quite happy with India and the development he sees taking place. "My business takes me to a lot of cities," he says. "Wherever I go I see a new airport." 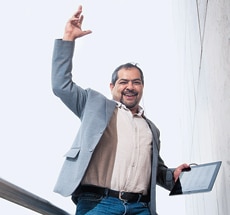 Rohit Bhatia, CEO, Dhingana Photo: Rachit Goswami/www.indiatodayimages.com
Sweet Sound of Money
Rohit Bhatia loves to take his Honda CBR bike on power drives, but now the CEO of Dhingana is steering his company into uncharted waters by launching a monthly subscription-based model, the first in India for a streaming music service app. The so-called "Spotify-model" has been very successful globally, but Indians as a rule don't really like paying for apps. "Our model is unique. Once you upgrade the iOS app to the paid version you can download any song and play it offline. But you will not have access to the songs if you don't renew your subscription at the end of the month," says Bhatia. The total download figure for the app is six million. Pune-based Bhatia is now working on an Android version with operator billing Santosh Nayar, CEO/MD, IFCI Ltd
Rising to the Challenge
Santosh B. Nayar, the new CEO and Managing Director at IFCI Ltd, has taken over at a time when the credit profile of the Delhi-based, government-owned nonbanking finance company has deteriorated due to pressure on interest margins, rise in bad loans and dent in profits. But he is confident of a turnaround. "I know the corporates very well. So many of them who had not visited IFCI in the past decade, have visited in the past 15 days," he says. A music aficionado, he listens regularly to both Indian and Western classical. 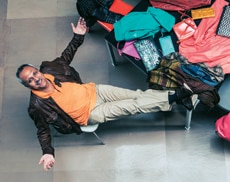 Snehdeep Aggarwal, Founder/Chairman, Bhartiya Group Photo: Vivan Mehra/www.indiatodayimages.com
Love of Leather
Driven by a love of enterprise, Snehdeep Aggarwal ignored his parents' advice to take up a job and started his own company instead. With `5,000 borrowed from his parents he began exporting carpets to Germany. In 1987 he diversified into leather exports. Today, his Bhartiya Group, is worth `1,000 crore and is India's largest leather exporter, supplying products to over 60 global brands including Zara, Mango, Hugo Boss, Guess and Levi's. Having set up a design studio in Milan, Italy, and factories in China and Chennai, Aggarwal now has plans to launch his own leather accessories brand. He has also ventured into real estate through a 125-acre integrated township outside Bangalore. He set up the country's first leather special economic zone near Chennai as well, where leather products and accessories are made and exported globally. Aggarwal love to travel. "I love walking through the streets of Europe. I derive a lot of my inspiration from watching how ordinary people live and work," he says. Michael Ault, Founder, Ault Group
Man of the People
A mechanical engineer with two patents to his name in the complex field of superconductivity, Moorthy K. Uppaluri has now been appointed the CEO of Randstad India. Randstad is the world's second-largest HR services provider. "Solutions to scientific problems have become quite deterministic but each people-related problem requires a different solution," says Uppaluri, explaining why he chose to leave science and embrace HR. "I have not totally given up on science. I use it very effectively to solve people issues," he says. Uppaluri previously worked with global giants such as GE and Microsoft. Moorthy K. Uppaluri, CEO, Randstad India/Sri Lanka
Nightclub Nabob
He is referred to by the media as the International King of Nighclubs, thanks to the 30-plus exclusive party places for the rich and the famous that he runs globally. The list includes the most profitable nightclub in the world, Pangaea, where a table costs anywhere between $2,000 and $15,000 a night. Now Michael Ault, 50, has launched the Indian edition of Pangaea in partnership with Spice Group's B.K. Modi at New Delhi's Ashok Hotel. In an interview to luxury magazine Robb Report India, he revealed interests that went beyond partying till dawn: he has a collection of the world's rarest firearms, the only ties he has ever worn have been made by Hermes, and so on. "In my opinion, buying expensive toys or homes that are intended to boost one's ego is an ultimate waste of money," he says. "Psychiatrists are far cheaper and more practical."