J.S. Sarma, Former chairman, TRAI and Rahul Khullar, New Chairman, TRAI
Ring in the New
One high-profile bureaucrat replaces another as Chairman of the Telecom Regulatory Authority of India (TRAI). Rahul Khullar, formerly commerce secretary, took over from J.S. Sarma, who retired after a three-year stint, in mid-May.

Khullar belies the stereotype of the faceless bureaucrat. A forceful personality with a sharp mind, he is given to plain speaking and does not suffer fools gladly. He can get remarkably animated while discussing subjects he cares about, banging the table before him repeatedly while making his points. He has also had a varied 37-year career in the Indian Administrative Service, joining the Prime Minister's Office under Rajiv Gandhi, and moving to the finance ministry in 1991 just as the then minister, a certain Manmohan Singh, began unshackling the Indian economy. For the last two years he has been leading the Indian team at the World Trade Organisation's complex trade negotiations.

The man he replaces, Sarma, is a much quieter and soft spoken personality, though just as perceptive and firm. "He speaks little and even when he does, it is primarily to probe further and find out what others have to say," says Harit Nagpal, President, DTH Operators Association of India. He too has had a wide ranging, 41-year career, which included positions as varied as municipal commissioner of Hyderabad and fertiliser secretary at the Centre. It was under his stewardship of the Andhra Pradesh Technology Services that the state took its first steps towards computerisation, as early as 1986/87.

Sarma has no regrets retiring. "I always knew I would be moving out of public service on a particular date," he told BT. "So there is no question of getting used to the new reality." He looks back serenely at his career. "It is very satisfying that one was serving the country, not working for profits." But Sarma leaves behind an agitated telecom industry. Operators are in a flap over TRAI's suggested base prices for the forthcoming auction of 2G spectrum, which are more than 10 times those for which spectrum was sold in 2008. No doubt the 2008 prices were throwaway ones and resulted in the notorious 2G spectrum scam, but telecom companies still insist that a 10-fold price rise is too much. "Natural resources must not be thrown away," says Sarma. "We need to ensure government revenues are protected."

How will Khullar handle the situation? He was known to be popular with exporters during his commerce secretary stint. They claimed he understood their problems. The telecom operators must be hoping he will understand theirs too.
-Sanjiv Shankaran and Anand Dev Amritesh, President/COO, Dunkin' Donuts, India
(W)hole Story
The only savoury with a hole in the middle most of us know is the vada. But if Dev Amritesh has his way, that will change soon. Amritesh is President and Chief Operating Officer of Dunkin' Donuts in India, the $6.4 billion doughnut and coffee retailer which set up its first outlet in India - at Delhi's Connaught Place - in May. "Delhi has always been a foodie place," he says. "That's why we chose it for the launch." By the end of the year, Dunkin' Donuts will have 10 outlets in the National Capital Region, moving to other metros only next year.

Will Amritesh succeed? The chances are high, considering the record of the company Dunkin' Donuts has chosen as its franchisee: Jubilant FoodWorks Ltd. It was Jubilant which brought Domino's to India and has since made the word 'pizza' a part of every Indian language. Still Dunkin' is taking no chances: its outlets will also offer sandwiches, and other snacks and beverages the Indian palate is more familiar with, under a new brand called Dunkin' Donuts & More.

Amritesh, once a drummer with a Bangalore-based band, Dhwni, is now a golf enthusiast who idolises Jeev Milkha Singh. Y.K. Hamied, CMD, Cipla
Price slasher
Y.K. Hamied, 76, Chairman and Managing Director of pharma firm Cipla, has done it again, lowering the prices of three vital cancer treatment drugs. They include the generic version of Bayer Corporation's Nexavar, used for liver and kidney cancers, which the global giant was selling for around Rs 2,80,000 for a month's treatment, but which Cipla initially provided at Rs 28,000 for the same period. Now, Hamied has slashed the price to Rs 6,480 per month. "The price of drugs is like water. Water finds its own level," says Hamied, who years ago had similarly slashed prices of anti-AIDS drugs.
-E. Kumar Sharma 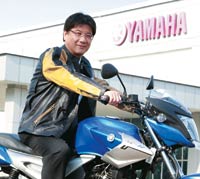 Hiroyuki Suzuki, CEO/MD, India Yamaha Motor
Going native
Hiroyuki Suzuki, 58, CEO and Managing Director, India Yamaha Motor, is learning Hindi and Tamil these days. Why Tamil? Because Yamaha is building a new Rs 1,500 crore plant in Chennai. It already has facilities at Surajpur, Uttar Pradesh, and Faridabad, Haryana. "The South provides 40 per cent of our sales. Tamil Nadu is our largest market," says Suzuki. "We are moving closer to our market." Suzuki achieved a 38 per cent growth rate for Yamaha in 2011/12, against the industry's 16 per cent. Pallavi Jha, CMD, Walchand PeopleFirst
Providing answers
"During my grandfather's time, if you told your employee to do something, he would do it," says Pallavi Jha, granddaughter of legendary industrialist Walchand Hirachand. "But in today's world, he may ask you back, 'Are you sure you want me to do it?'" Jha is Chairperson and Managing Director of Walchand PeopleFirst Ltd, which has partnerships with leading international learning and self-development firms such as Dale Carnegie Training, US, and PerformanSe, France, that teach people to respond to such questions. To commemorate its 100th anniversary, Dale Carnegie Training announced the launch of the Advanced Dale Carnegie Course (ADCC) in three Indian cities - Delhi, Mumbai and Bangalore - in partnership with Walchand PeopleFirst. Only those who have already done the basic Dale Carnegie Course and are looking to extend their skills to a higher level are eligible for it.