Ravi Rishi, Chairman, Vectra Group
Collateral damage
In the sniper war between General V.K. Singh, the Chief of Army Staff, and Union Defence Minister A.K. Antony, the main casualty has been Ravi Rishi, Chairman of the London-based Vectra Group. A 1977 batch alumnus of IIT Delhi, Rishi, like steel tycoon Lakshmi Mittal, made his fortune on the back of the collapse of Communism in eastern Europe.

It began with Gen Singh making the startling revelation that he was offered a Rs 14 crore bribe to clear a purchase order of 600 trucks. While the truckmaker's name has not been officially disclosed, media speculation suggests it was Tatra, a Czech vehicle manufacturer.

Rishi, now a British citizen, started Vectra in 1986 after he moved to London, but the company really came into its own around 1992, when it snapped up several factories in the erstwhile Czechoslovakia, including Tatra. Rishi did not buy a majority share in Tatra, but created a joint venture called Tatra Vectra Motors Ltd, which thereafter entered into a joint venture with Bharat Earth Movers Ltd, now simply called BEML, a Defence Public Sector Unit (DPSU), to make heavy vehicles for the Indian armed forces.

In 2006, Vectra, which already controlled Tanax, the Slovakian arm of Tatra, was part of a consortium called Blue River which bought a 92 per cent stake in Tatra. At the same time, Rishi increased his operations in India significantly on the back of several large orders from the government. In 2009, he formed a joint venture with Russian military truckmaker Kamaz.

Rishi also created Global Vectra Helicorp Ltd to service and operate helicopters in India, even winning a license to operate the helicopter service at the Vaishno Devi shrine and during the Amarnath Yatra. With over 50 helicopters, Rishi is the largest such operator in India, with politicians frequently using his choppers during election campaigns.

However, back in 2007, Global Vectra Helicorp was in the news for the wrong reasons. As a representative of Eurocopter, the France-based global helicopter manufacturing and support company - through another joint venture called Indocopter - it successfully won a $600 million Indian Army deal for light helicopters.

But the deal was later cancelled when, following a complaint by Bell Helicopter of the United States, a probe found that the rules had been bent by the Indian Army to secure it. Rishi, therefore, is no stranger to controversy.

Still, as Rishi has pointed out in several interviews, Tatra trucks are used by armies of other countries as well and the prices they paid for them were not very different from those paid by India. Indeed, Rishi claims India paid less than the armies of the Czech Republic, United Arab Emirates and Israel. Subtle hints have been dropped that the allegations are being made at the behest of 'interested' third parties - in this case Indian heavy vehicle manufacturers who have recently developed the capacity to manufacture 8x8, 10x10 and 12x12 trucks and claim they can supply these a lot cheaper than Tatra. Rishi even called Gen Singh 'menopausal' for making the allegations.

But with Rishi under a cloud and constantly being questioned by the CBI, the situation in the near future is likely to get tougher for him. A telling pointer was that after the allegations surfaced, few army officers dared to venture near the Vectra stand at the recent Defexpo India 2012 in New Delhi. 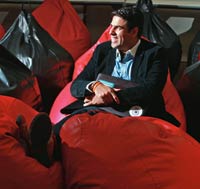 S.D. Duggal, CEO, Nivio
Shining early
Sachin Dev Duggal joined Deutsche Bank as a serial innovator at the ripe age of 17. Now, at 29, he is the CEO of Nivio, a global cloud computing venture he founded in 2004. "I dreamt of a desktop that could be anywhere and nowhere," he says. In early February this year, Nivio, which won the World Economic Forum's Technology Pioneer Award in 2009, raised funding of Rs 104 crore from the Videocon Group and US-based private equity firm AEC Partners. Nivio currently has 100-odd employees, though Duggal hates to call them such. "They are innovators," he says. Tarun Khanna Professor, Harvard Business School
Helping Harvard put down roots
Harvard Business School (HBS) has been conducting its executive education courses in India for about five years. But now, its new amphitheatre-style classroom, the first of its kind in the country, at the Taj Lands End hotel in Mumbai, will become a base for not just HBS's but also Harvard University's activities in the subcontinent. "I see it as a constructive escalation of our commitment here," says Tarun Khanna, Jorge Paulo Lemann Professor at HBS and Director of Harvard's South Asia Initiative. With a seating capacity of 82, the classroom will offer state-of-the-art multimedia facilities. Khanna adds that a third of those attending will be from overseas. This year, the two-week open enrolment programmes will go beyond business and tap into the university's vast resources to tackle subjects such as public health and policy making. Besides executive education courses, the classroom will also host conferences that will bring together the government, industry and academia.

Nitin Joshi, IIT Bombay student
Young minds, fresh thoughts
Massachusetts Institute of Technology's recent listing of top innovators under 35 in its Technology Review's India TR35 reveals some interesting achievements by young Indians. Nitin Joshi, a student at IIT Bombay, has developed dual compartment nanostructures that enable lung cancer patients to inhale drugs, unlike in conventional chemotherapy where the drugs are administered intravenously. The nanostructures, which can contain two anti-cancer drugs at a time, are put in an inhaler that delivers the drugs deep into the lungs. "The problem with the intravenous method is that it targets other healthy organs too. Our treatment focuses only on the tumour," says Joshi. 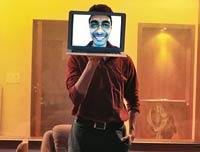 Jay Meattle, Co-founder, Shareaholic
While online, people share a host of things and that is what enables Jay Meattle make money. His company, Shareaholic, gathers information on web users and employs it for better targeting of online ads. Started in 2009, Shareaholic has a database of over 270 million Internet users listing their interests, location, how influential they are, etc. "We have around 200,000 websites on our network from where we capture data on users' habits," says Meattle. 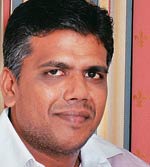 V.O. Vinayagam, Chief Technologist, Hexolabs Interactive Technologies
V.O. Vinayagam, Chief Technologist at Hexolabs Interactive Technologies, has come up with 'Mobile Antakshari', a value-added service for mobile users to play the musical game. The users can test their skill at the game against artificial intelligence or their friends. The service uses complex algorithms to match users input with over 6,000 songs in four languages: Hindi, Tamil, Telugu and Malayalam. It is currently available for Idea subscribers only. 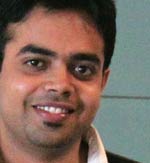 Anirudh Sharma, Co-founder, Ducere Technologies
Anirudh Sharma, co-founder of Ducere Technologies, has designed a 'haptic' shoe that helps the visually impaired reach their destination. The navigation aid, called 'Le Chal', works on the principle of touch where the users let an Android-based mobile app, which is powered by an online map service, know their destination. The app provides some options and once the user confirms the destination, the information gets transmitted, through Bluetooth, to the vibration motors embedded in the shoes. The motors give a vibrating indication at the front, back, left and right side of the feet, directing the wearer in the desired direction.