Rituraj Sinha, MD, SIS Prosegur <em>Photo: Vivan Mehra/www.indiatodayimages.com</em>
Vaulting Success
The biggest vault in the country, spread over 40,000 sq ft, bigger even than that of the Reserve Bank of India, became operational recently. It is owned by SIS Prosegur, the joint venture set up last year by Security and Intelligence Services (SIS) with the Spanish multinational Prosegur - the first strategic foreign investment in the value-added logistics and cash management segment in India. "Most of our customers are pleasantly surprised when they visit this facility," says Rituraj Sinha, Managing Director of the company. "They do not expect a cash processing and vaulting facility of this scale outside the banking system." The facility has state-of-the-art security systems, including over 350 CCTV cameras, access control automation, motion sensors, pressure sensors, and firewalls and can process Rs 250 crore worth of currency notes in a day. SIS Prosegur operates 18 cash vaults and processing centres across India with a service network across nearly 300 towns and cities. Elmien Scholtz, Founder-Director, Bio Sculpture Gel Photo: Shekhar Ghosh/www.indiatodayimages.com
Gelling Well
The look of their finger and toe nails matters to a whole lot of women. No one knows this better than Elmien Scholtz whose company, Bio Sculpture Gel, begun in 1988, now has a presence in over 45 countries. "We were the first to make coloured gel and also the first to make gel that can be removed without damaging the natural nail," she says. Now she is entering India too, having found the "right partner" in Pammi Lall, who will be Director, Bio Sculpture India. The Indian subsidiary, apart from retailing the gel will conduct courses to train nail technicians. The first training centre has opened in Delhi. How often does Scholtz get her own nails done? "Every three weeks," she says. 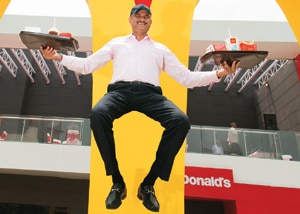 Vikram Bakshi, JV Partner, McDonald's Photo: Vivan Mehra/www.indiatodayimages.com
Biggest Mac
McDonald's has opened its biggest outlet yet in India - spanning a vast 8,000 sq ft - at a mall in Noida, on Delhi's outskirts. And no one is more pleased with it than Vikram Bakshi, Joint Venture partner and Managing Director, McDonald's India (North and East). He readily acknowledges that the current depressed economic climate worked to McDonald's advantage in Noida - both real estate and employees came cheaper than they used to. "A good location is very important for opening such large restaurants," he says. McDonald's future plans include expanding in small towns and introducing grilled and steamed food on its menu to promote healthy living. Golden Krishna, Senior Designer, Samsung Design America
Golden Idea
It was a quote which went viral on the Internet. "The best interface is no interface," said Golden Krishna, Senior Designer at Samsung Design America at a conference in Austin, Texas. What did he mean? He wants people to be able to do the things they use computers for without employing the paraphernalia of screens and icons and keypads and apps - instead they should be able to navigate through voice, gestures and other 'natural' actions. "There is an obsession with drawing wireframes instead of thinking of how technology can really meet our needs," says Krishna, an alumnus of Pitzer College in Claremont, US and The California Institute of the Arts. Krishna's parents hail from Andhra Pradesh and Kerala, but he is US-born. 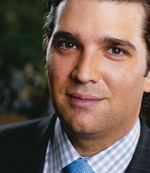 Donald Trump Jr, Executive Vice President (Development and Acquisitions), Trump Organization
Coming Up Trumps
Less than a year ago, Donald Trump Jr, 35, son of US real estate tycoon Donald Trump, entered the Indian real estate market through a tie-up with developer Panchshil Realty to build a premium residential tower in Pune. He has plans to expand now to other regions such as Delhi-NCR, Mumbai, Bangalore, Chennai, Hyderabad and Goa. He says there is great demand for luxury housing in India. "We will continue to work towards identifying local developers who have a proven track record and share our vision of delivering best-in-class projects," he says. A Wharton School of Finance graduate, Trump Jr calls himself a true outdoors man who spends his free time fishing, hiking and golfing. He notes that numerous constraints hamper foreign investment in Indian real estate. "The absence of a single regulator to monitor business practices and lack of suitable exit options are problems," he adds. Pramoud Rao, MD, Zicom Electronic Security Systems Ltd
Secure Job
Zicom Electronic Security Systems, the country's first listed security firm, has expanded from being a security apparatus manufacturing company to one that provides security services as well. The project, called Electronic Security as a Service (eSAAS), began eight months ago and currently covers 1,300 buildings in Mumbai and two of its satellite towns, and Pune. It is targeting another 2,000 buildings and also wants to enter Bangalore and Hyderabad. "The idea is first to take over the security of buildings and then, when confidence is established, of individual homes," says Pramoud Rao, Managing Director, Zicom. Around 70 per cent of Zicom's revenues of Rs 700 crore come from overseas. Rao says his biggest concern is the average Indian's apparent lack of awareness about security and fire protection.