News
Magazine
People
People who were in news in business world

People who were in news in business world

Daniel Sennheiser, President, Strategy and Finance, Sennheiser Electronic
Obsessed with listening
Headphones are one of the coolest gadget accessories and no one knows this better than Daniel Sennheiser. His grandfather and the founder of Sennheiser Electronic, Dr Fritz Sennheiser, built the family business at the end of World War II. At the time, the world market for headphones stood at a mere 500 units. Today the company is considered a global leader in professional audio and recorded a turnover of m467 million in 2010. An accomplished pianist, Daniel is proud of his family legacy and obsessed with "listening" to the consumer.

An obsession which brought him to India, a country he believes is an important part of Sennheiser's growth strategy. The company already has tie-ups with Indian musicians and bands like A.R. Rahman, Lucky Ali, Shankar-Ehsaan-Loy and Swarathma, to name a few. And how does Daniel kill stress? By simply playing the piano for 15 minutes after work.
-Manasi Mithel 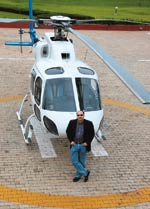 Capt G.R. Gopinath, Chairman, Deccan 360
Rough ride
When Capt G.R. Gopinath launched his express logistics venture, Deccan 360, two years ago, the aviation industry was still reeling from the slowdown. Even so, he hoped to break-even in 18 to 24 months. But high operating costs and fuel prices have played spoilsport. Gopinath, who rose to fame with his lowcost airline experiment, Air Deccan, has now set out on a major restructuring exercise and is looking for new investors. Media reports say Reliance Industries, which holds a substantial stake in Deccan 360, may not make any fresh investments and may even consider exiting. On his part, Gopinath says: "At $800 million, India's express cargo market is just about a tenth of China's, and there is a huge opportunity waiting to be tapped. We hope to benefit from that.''
-K.R. Balasubramanyam

Rishad Premji, Vice President, Wipro
Son rise
Wipro Technologies, India's third-largest software and services exporter, has seen a lot of churn at the top management level, so it is hardly surprising that founder Azim Premji has decided to promote his elder son Rishad, 34, as Vice President in charge of mergers and acquisitions, as well as global information technology strategy. A Harvard Business School alumnus, Rishad joined Wipro, which his grandfather established in 1945 as a vegetable oil and soap manufacturer, in July 2007. He has already driven Wipro into new areas, leading the buyout of Gallagher Financial Systems. The young scion is rarely seen and even more rarely heard. What Bangalore wants to know is when he will take over from his father.
-K.R. Balasubramanyam

Vilmos Zsigmond, Cinematographer
Camera guru
Vilmos Zsigmond, an Academy Award-winning Hungarian-American cinematographer, says film-making is a fine art and should not fall prey to technology. It makes no difference, he maintains, that a new era of digital filmmaking has set in. "Even if it is digital film-making, artistry and imagination must remain at its core. Lighting direction is important as well," says the 81-year-old, who has shot one digital film in Hungary so far called The Maiden Who Danced to Death. Zsigmond, who won an Oscar for his ground-breaking work with director Steven Spielberg in Close Encounters of the Third Kind, was in India recently for Cinema India 2011, an industry trade show. He conducted two cinematography-related masterclasses, taking those who attended behind the camera to explore storytelling and execution of vision. He feels young film-makers should learn their craft by shooting with film. What about 3D films? "There is too much hype about 3D films because that's where the money is," he says.
-Anusha Subramanian

Richard Fulton, Director, Aviation Business Development, Tyco Security Products
Flying visit
"India is now a global force in aviation," says Richard Fulton, Director, Aviation Business Development, Tyco Security Products, part of the $17-billion Tyco International. Fulton was in India recently for the India Airport Summit 2011. Coming from Britain, a nation of 60 million, the Belfast-born Fulton seemed somewhat overwhelmed by the size of India. He says India, China and Brazil are the next big markets for aviation since the flights per passenger ratio is currently low. A lover of Gavi di Gavi, an Italian white wine, Fulton spends his leisure time "woodturning". And when in a bad mood, he listens to Van Morrison aka the Belfast Cowboy's Brown Eyed Girl.
-Dearton Thomas Hector

Peter Snell, CEO, Synovate Business Consulting
Get, Set, Grow!
Within three months of taking direct charge of the India operations of Synovate Business Consulting, an arm of the $885-million research firm Synovate, Chief Executive Peter Snell has drawn up plans to take on rivals. His strategy: to provide a one-stop shop market advisory service to clients by leveraging Synovate's capabilities in market research and domain expertise in areas such as health care, automotive, consumer goods, and financial services. "Unlike other consulting firms who outsource their research, we provide seamless integrated reports to our clients," he says.
-Manu Kaushik