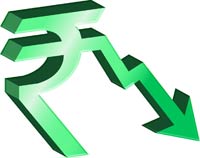 According to Alex Mathews, head of research, Geojit BNP Paribas Financial Services, the sell-off in equities, dollar purchases by oil marketing companies and fears over the deepening European crisis is boosting demand for the safe haven US dollar from investors globally, which has added to the rupee's woes.

The fall has not been unique to the rupee alone; it was seen in other emerging markets (EMs) as well, possibly reflecting global risk aversion. "However, of late, while many EM currencies recovered from their recent lows, the rupee continued to exhibit weakness, possibly reflecting the deterioration in India's macroeconomic indicators," says Vikas Khemani, president and head (wholesale capital markets), Edelweiss Financial Services. 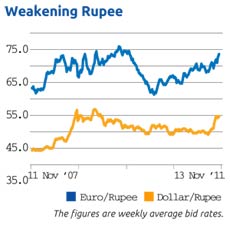 The rupee is facing headwinds arising from both domestic and global factors. The widening current account deficit (CAD) and the deteriorating portfolio inflows seem to be adding to the rupee's woes. Compared with an inflow of $30 billion in the year 2010, foreign institutional investor (FII) inflows have been more or less flat to negative this year.

The Reserve Bank of India can take measures such as selling the dollar in the market or increasing interest rates, which could make the rupee appreciate. However, analysts do not expect the RBI is to intervene.

Currently, the rupee is pretty close to its 32-month low against the dollar, witnessed in March 2009, which was about Rs 52.1. Once the rupee crosses this zone, it could be in an uncharted territory. "If this level is breached, the rupee could slide to Rs 52.41; else, it could remain in the region of Rs 51.93 in the short term," says Mathews.

"Over the medium term, if the event risk recedes on account of some solution emerging from Europe or the domestic macroeconomic situation improves, the rupee may appreciate. However, we don't see it regaining the Rs 44-45 levels in a hurry," says Khemani.