Rupee likely to stage a comeback against dollar in forex market

There are several factors that will determine the rupee's movement from here on. High inflation, deficit concerns and India's high import bill could have a bearing on the currency.

Having plunged almost 18 per cent in 2011, the rupee has seen a turnaround this year. The currency has strengthened by 7.5 per cent against the dollar in the past one year as on 17 February 2012. From the level of around Rs 53 per dollar, the currency has risen to the 49 mark.

MUST READ: How rupee fall affects your budget

"The positive performance of the Sensex since the start of the year has boosted the rupee," says Naveen Mathur, associate director, commodities and currencies, Angel Broking.

"The renewed risk appetite of foreign investors has largely been backed by news of Greece moving a step closer to securing the much-needed bailout funds to avoid a default, which could cause a cascading effect on the rest of the debt-ridden European nations," says Mathur.

"This has helped India attract $4.5 billion FII investments in the first two months of the year."

Having said that there are several factors that will determine the rupee's movement from here on. The combination of high inflation and deficit concerns for the Indian economy could mean a weak rupee.

MUST READ: How NRIs gain if rupee falls

Further, India's high import bill could have a bearing on the rupee. The country is the largest importer of oil, prices of which have been on the rise.

Any new negative development on the European economic front will also have an adverse impact on the Indian currency. More clarity could emerge after the Union Budget 2012.

MUST READ: Exporters feel the maximum heat if rupee falls 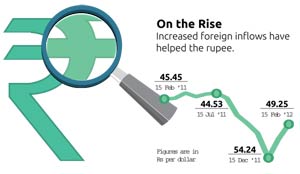 Increased foreign inflows have helped the rupee
Click here to Enlarge
"In the near term, the rupee could trade with a depreciation bias as market sentiments remain mixed, largely expected to find support at 48 and resistance at 51.30," says Mathur.

From a long-term perspective, the rupee is expected to appreciate.