'The start-up scenario in India is very attractive' 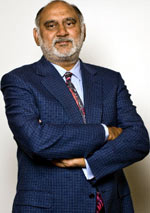 Why have you zeroed in on India? Which sectors or themes do you prefer in the country?
Our fundamental thesis in India revolves around the fact that the gross domestic product per capita will continue to grow. Moreover, it will grow in a lumpy fashion, drastically up one year, low the next. The sectors that go back to the basics, roti, kapda aur makan, or handle needs such as healthcare, will benefit. We are interested in investing, so we are sector agnostic.

What is driving the money to India?
The prime reason is that the scenario in India is very attractive. It is still a country where entrepreneurs are looking for investors to buy stakes in their ventures. They have the drive to get into a business and take it to a level beyond which they need to tap the capital markets for growth. It’s in this phase that VCs come into play. Also, companies seeking venture financing in India have typically been middle- to latestage companies, not true start-ups like those that are financed in the US. So it is a better proposition and relatively less risky.

How do you read the equity rally, particularly over the past few weeks?
The strength in the equity markets was partially because we bounced back from a very low value. But it also reflects the fact that we never really slowed down as much as was feared, and as much as occurred elsewhere. We faced a crunch because of poor liquidity, but managed to bounce back. It has risen rapidly because of the money pouring in and you are likely to see a reverse rally when that money starts to dry up a bit.

What is the biggest deterrent to investors funding businesses here?
There aren’t enough start-ups to absorb the capital, so investors have to focus on older companies. This is changing slowly. It also has to do with the nature of local requirements, talent and ability to start ventures. It’s not as if there is lack of entrepreneurship; the gaps exist because of businesses either duplicating an existing model or being unable to sustain an idea.