Despite rise in number of whistleblower complaints, the lacunae in the system are proving to be a deterrent in the fight against corporate unethical practices 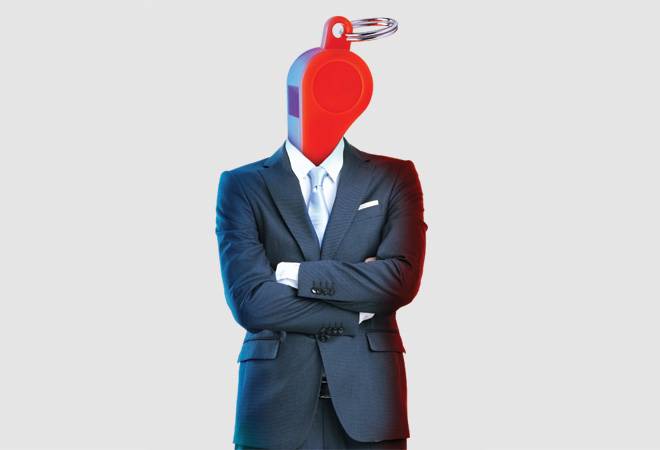 On October 22, 2019, the Infosys share price tumbled 16 per cent, wiping out Rs 44,000 crore in market cap, after a complaint accusing Chief Executive Officer Salil Parekh of indulging in unethical practices came to light. Two anonymous whistleblower complaints sent simultaneously to the US Securities and Exchange Commission (SEC) and Infosys board members accused Parekh and the Chief Financial Officer, Nilanjan Roy, of indulging in accounting fraud, among other things. An investigation by the company's audit committee later found no wrongdoing. But the damage was done. It took Infosys shares, which ended October 22 at Rs 643 against the previous session's close of Rs 767, almost three months to recover the losses.

In a similar case, in June last year, two shareholders of Indiabulls Housing Finance filed a whistleblower complaint with the Supreme Court accusing the Chairman, Sameer Gehlaut, of siphoning off public money through shell companies. The news shaved Rs 7,000 crore off the company's market cap. In November, the Ministry of Corporate Affairs gave the company a clean chit. 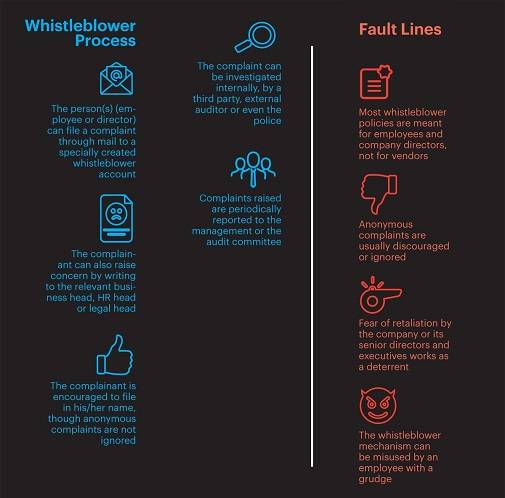 While the whistleblower mechanism, introduced in the Companies Act in 2013, is a useful tool in pursuit of higher corporate governance standards, instances like these beg a question if it is being misused by people with 'vested' interests to settle professional scores or harass business rivals. Arvind Gupta, who exposed the alleged quid pro quo between the then ICICI Bank Managing Director Chanda Kochhar and Videocon Group Chairman Venugopal Dhoot, agrees that the whistleblower policy can be misused like other anti-corruption tools such as RTI. Gupta's complaint that Videocon was given undue advantage in grant of loans had led to action against Kochhar. However, in spite of such obvious successes, the whistleblower mechanism is facing a crisis of credibility, due to several reasons. One is the several lacunae in the system. Then there have been cases where it has been used to settle scores, prompting many to demand punishment for those who use it with malicious intent.

However, most experts say that India where corporate governance standards are poor, attempts to muzzle whistleblowers can only backfire. Even Arvind Gupta, who admits the policy can be misused, feels it is a powerful tool for corporate employees to expose wrongdoings. "It is a platform for them to raise their voice," he says. Still, the gaps are serious and need to be filled to ensure that the system is not held hostage to vested interests.

The Companies Act requires listed companies, or those which accept deposits from the public, or those which have borrowed more than Rs 50 crore from banks and public financial institutions, to build a whistleblower system with a hotline number, a mail id or a designated person with whom employees can lodge complaints. The complaints can relate to inaccuracy in financial records, financial misappropriation and fraud, conflict of interest, misuse of company assets and resources, inappropriate sharing of sensitive information, corruption & bribery, insider trading, discrimination in any form, etc. The complaints can be investigated internally, by a third party, by an external auditor, or even police. They have to be periodically reported to the management or the audit committee. However, many experts say these are merely compliance requirements, and in many places, even in listed companies, managements usually have a tick-box approach to whistleblower complaints and do not take them seriously.

A partner with a law firm points out at the Infosys case. "Somebody in the management should have explained why the audit committee was sitting on a complaint for two or three months, whatever the time is. They were sitting on a time bomb. Why? Because if I am a whistleblower, I might be thinking that I've blown the whistle twice on the company mechanism, but nothing is happening. So, I'm going to go straight to the regulator because the regulator has a bounty programme (in the US) that is big and I want to get a share of the bounty," he says on condition of anonymity. In the US, the SEC can provide monetary awards to 'individuals who come forward with high-quality original information that leads to a Commission enforcement action in which over $1 million in sanctions is ordered. The range for awards is between 10 per cent and 30 per cent of the money collected'. Whistleblowers in Infosys, which is listed in the US, could have been eligible for such a reward. India does not have a whistleblower bounty programme but the Securities and Exchange Board of India is planning a Rs 1 crore reward for anyone giving information on insider trading practices. 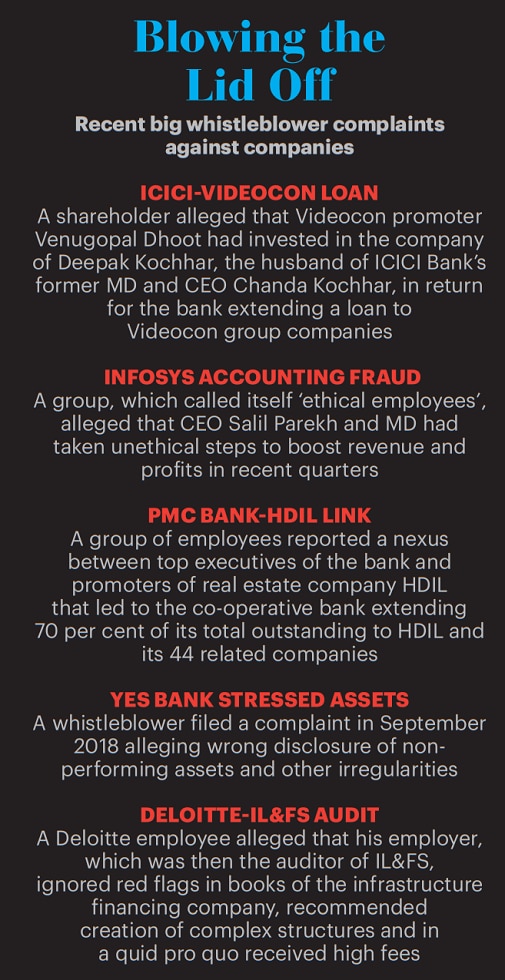 Experts attribute the attitude of managements to lack of due process and absence of maturity among some of those who file the complaints. "If you get 10 complaints, half could be either not relevant or frivolous," says Arpinder Singh, Leader, Forensic & Integrity Services, EY India and Emerging Markets. "We've seen complaints that the coffee machine is not working and that the company doesnt care about us. You also get a lot of complaints at the time of appraisal. Someone would file a complaint that he saw his manager doing something unethical three years back. How come you remember this only when you're not promoted?" he says. Kunal Gupta, partner, white-collar crime investigation, Trilegal, says, "I have heard someone say that the whistleblower hotline in his company is most active between 1 pm and 4 pm. Why? Because that is the time employees have lunch. That is when they are in the most disgruntled mood and want to rant it out."

Experts say frivolous complaints or complaints with malicious intent can cause irreparable damage either to the company or the individual against whom the allegation is made. In case of a listed company, this could have a huge impact on shareholders due to fall in share prices. There is also a concern that the policy could turn out to be a double-edged sword. This concern was raised after reports that Infosys whistleblowers were being used by a former disgruntled director. Such instances give rise to demand for action against those who make 'false' allegations. Pavan Kumar Vijay, founder of corporate legal advisory firm Corporate Professionals, says there should be a law to penalise a person making wrong and frivolous complaints. "The rule of whistleblowing is that you should have authentic information with proof. A complaint based on hearsay could damage the company or the person. If the complaint is against a small company, people are least bothered, but a complaint by even an irrelevant person against a big company can be blown out of proportion," he says.

Live With the Beast

Should the whistleblower mechanism be ignored only due to fear that it could be misused? It is true that the system is not fully mature yet, genuine whistleblowers do not feel protected, and so the complaints are often anonymous. But these inadequacies should not be held against a system that seeks to improve corporate governance, say experts. Whether it is the ICICI-Videocon quid pro quo case, the PMC Bank-HDIL link (the bank came close to bankruptcy due to excessive exposure to HDIL) or understatement of stressed assets by Yes Bank, whistleblowers have brought to light a number of cases of wrongdoing. The mechanism may not be as evolved as in more mature markets but is probably getting there. "It is now better than earlier. Look at the number of cases we have today. Earlier, it was never heard of," says Kalpana Unadkat, Partner, Corporate and Commercial Practice in Khaitan & Co, a law firm. Kalpana is on boards of three companies.

Kunal Gupta of Trilegal says misuse of the policy is not a ground to kill it. "There will be people who will do it. And that's okay. You have to live with the beast," he says. Pavan Kumar Vijay of Corporate Professionals, who demands penalising of those who file frivolous or wrong complaints, admits the policy has led to unearthing of big scams. So, how can one strike a balance? Some experts call for a clear policy on anonymous complaints while others suggest a more thorough study of such complaints. 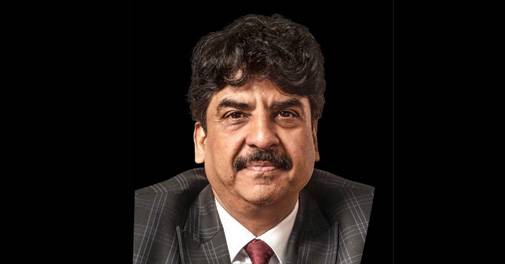 The companies have different approaches towards anonymous complaints. ITC's whistleblower policy on its website says: "Anonymous complaint will not be entertained. If the complainant has reasons to believe that the immediate reporting authority or his/her superior is involved in the suspected violation, the complaint may be addressed directly to the Head of Corporate Human Resources." But others, such as Hero MotoCorp, welcome anonymous complaints. "A whistleblower will be given the option to keep his/her identity anonymous while reporting an incident on Ethics Helpline," says the policy.

Kalpana Unadkat of Khaitan & Co says that "rather than look at who is filing the complaint, look at what the complaint is about" even as she insists that not all companies take anonymous complaints seriously. She, however, admits that investigating anonymous complaints is difficult. "The investigation becomes difficult as you have to just keep digging without knowing who to question. You cannot keep asking questions about the complaint to many people as you don't know who may leak the information. And it could have repercussions such as on the share price of the company."

Deepak Bhawnani, the founder and CEO of investigative consulting firm Alea Consulting, which has investigated several whistleblower complaints for companies, agrees that disgruntled employees or vendors may misuse the system. "If it's a disgruntled employee, and he does it anonymously, there are ways of figuring it out." But not giving the option of anonymously filing complaints can prevent reporting of genuine fraud cases given the fear of retribution the complainants may face. 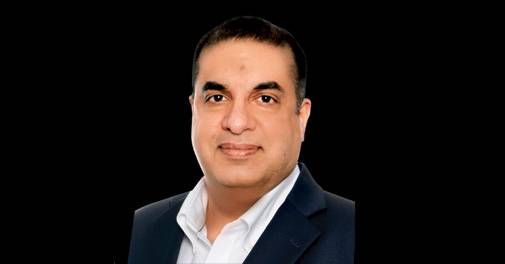 If it's a disgruntled employee, and he does it anonymously, there are ways of figuring it out,” says Deepak Bhawnani, CEO at Alea Consulting

With little whistleblower protection in the corporate sector, the call for punitive measures against false allegations may be detrimental to a mechanism which is evolving and which has helped blow the lid off many corporate frauds. "I dont quite agree with the point that penalties should be levied. I think you have to ensure the right level of sensitisation. You have to tell employees that ultimately it is your organisation and baseless complaints will get it in trouble," says Kunal Gupta of Trilegal.