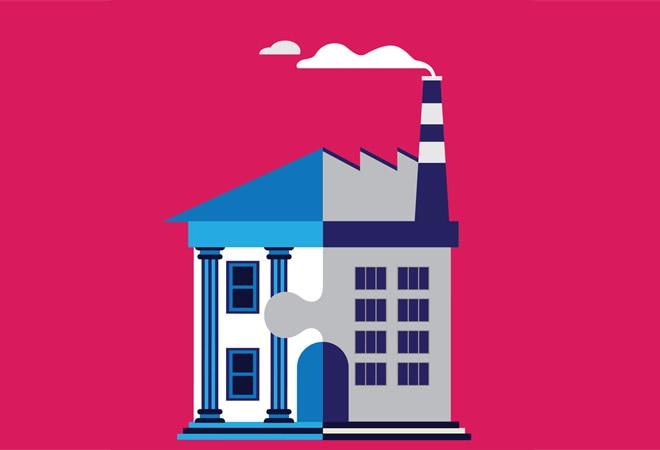 What is common between Mercedes Benz and Volkswagen? Both are automakers, both are based in Germany. But few know that both also run banks. Mercedes Benz Bank and Volkswagen Bank are well-known brands in Germany. Similarly, UK-based supermarket chain TESCO has a bank and so does Richard Branson's Virgin Group, whose bank got merged with Clydesdale Bank last year.

All these are not big universal banks that dominate the system. The UK market has big global banks such as Barclay, Lloyds, HSBC and Standard Chartered. Similarly, banks run by the German automakers don't even figure within the top ten. There are also no instances of bad governance in these corporate-backed banks. Part of the reason could be the well-developed legal system in these economies.

But the same cannot be said about emerging market economies. Russian Alfa Bank promoted by billionaire Mikhail Fridman was in the news for its alleged link with Donald Trump's campaign team in the 2016 Presidential election. This incident, though not proved yet, exposes the corporate influence in political matters at the highest level. And this is what makes regulators a bit cautious in allowing big corporates in the banking business.

In India, too, corporates have restrictions in terms of owning not more than 10 per cent in a bank. Seven years ago when the Reserve Bank of India (RBI) opened the banking licence tap, Tatas, Reliance ADA, Aditya Birla Group, Bajaj and Videocon were among the two dozen applicants. The RBI under then Governor Raghuram Rajan, however, surprised everyone by selecting infrastructure financing institution IDFC Ltd and microfinance institution Bandhan for the universal banking licence. The selection of new banking licences was done to fill the financing gaps in rural and semi-urban areas where IDFC and Bandhan presented a better plan. In fact, the 2019 on-tap guidelines for Small Finance Banks had shut all doors for industrial houses when it excluded them from promoting a bank.

A fortnight ago, the RBI's internal working group created a flutter in the market by recommending that large corporates should be allowed to set up banks. The group has also recommended allowing well-run large NBFCs with asset size of Rs 50,000 crore and above, including those owned by corporate houses, to convert to banks.

Globally, rules are framed in such a way that banks are widely held in order to avoid concentration of control. Most countries cap the level of ownership by a single person or related entities. In Canada, for banks with equity capital between CAD (Canadian dollar) 2 billion to CAD 12 billion, a maximum shareholding of 65 per cent is permitted. The remaining 35 per cent has to be held publicly. Similarly, banks with equity capital greater than CAD 12 billion are required to be widely held with no major shareholder, except in specific circumstances. There are also single corporate or group exposure limits in all countries to avoid concentration of credit.

India, too, has a non-operating holding company structure for banks with 40 per cent shareholding , which is required to be brought down to 15 per cent in 15 years. Surprisingly, the RBI's working group has also upped the minimum promoter holding from 15 per cent to a high of 26 per cent.

Is the RBI's proposal to allow corporates in banking just a trial balloon?

There are some who suggest strong lobbying by business houses. Secondly, government finances are too stretched to support the financial system directly or through public sector banks. The failure of IL&FS has created a huge vacuum in infrastructure financing. Similarly, LIC had to step in to save failed IDBI Bank. Yes Bank, too, was bailed out by half a dozen private banks with SBI as the anchor investor.

Also, PSBs, with over two-third share in deposit and advances of the banking system, won't to be able to participate aggressively in supporting various sectors of the economy. "In a bank-dominated lending system, you need players with size, scale and capital to support growth," says the CEO of a corporate-backed NBFC. Large corporates are flush with capital and have talent and management or ability to attract best talent and a strong brand presence to scale up the banking business. "We have to get credit and scale very fast. If we can ensure credit and scale and regulations that support appropriate action at the right time, I think allowing corporates is almost a necessity," believes Aditya Puri, former MD & CEO, HDFC Bank.

K.V. Kamath, who recently completed his five-year tenure at Shanghai-headquartered New Development Bank, says the Chinese banking system is 1.7x of GDP whereas the Indian banking system is around 0.7x. "Given our aspiration of $5-trillion economy or $10 trillion tomorrow, we need larger institutions or participation from large enterprises in the private sector."

Rashesh Shah, Chairman of Edelweiss Group, says if the economy has to grow from $3 trillion to $5 trillion, every regulator will have to increase capacity.

The sharpest criticism has come from Rajan and former Deputy Governor Viral Acharya, who called the recommendation a bombshell. "It could further exacerbate the concentration of economic and political power in 'certain business houses'. The working group also got the same response from former deputy governors, bank CEOs and consultants. There is also the possibility of the stress in non-financial activity spilling over to the banking business. In fact, there are ways of circumventing the rules on connected lending due to a complex corporate structure.

But some suggest that regulatory and system exploitation can happen otherwise also, and it has nothing to do with corporate ownership."If that be the case, no fraud should take place in PSBs or private banks where promoter ownership is capped," defends Mahesh Singhi, Founder & MD at Singhi Advisors.

But the bigger question in a developing country such as India is the concentration of economic power and the consequent hold on political power. The US has put specific provisions in the Federal Reserve Act on regulating relations with affiliates and has even put in guidelines on dealing with affiliates of a corporate house. The RBI working group had also talked about US-type amendments in the Banking Regulations Act 1949 to deal with the issue of connected lending and exposure between banks and other financial institutions and non-financial group entities.