Huge revenue loss, relief and rehab costs may derail the government's ambitious plans for the year

Budget 2020 reduced the allocation to the Mahatma Gandhi National Rural Employment Guarantee Scheme (MGNREGS) by 13.5 per cent (to Rs 61,500 crore) from the previous revised estimate of Rs 71,000 crore citing lower requirements. This was before coronavirus had set its foot in India. By mid-May, when the pandemic was wreaking havoc across the country, the government increased allocation to MGNREGS by Rs 40,000 crore, taking the total to Rs 1.01 lakh crore, to support lakhs of migrant workers forced to go back to their villages after being rendered jobless due to the lockdown. 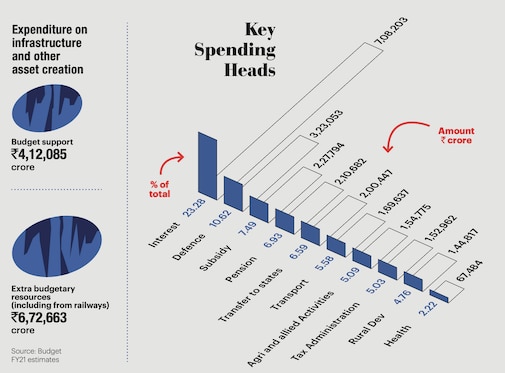 Expenditure Secretary T.V. Somanathan has in the recent past said that the government does not want poorly planned spending cuts. But the government has given enough hints that it is not spending more than what it had budgeted for earlier this year. In the Budget, early in February this year, the government had planned for spending Rs 30.4 lakh crore in FY21. While many experts recommend expansionary expenditure to tide over the slowdown, the government has put restrictions on quarterly spending of departments. In April, it asked some of its minor ministries - Group B and Group C as they are called - to cap quarterly spending at 20 per cent and 15 per cent, respectively. It put on hold a hike in dearness allowance (DA) of Central government employees and pensioners till July 2021. It also asked ministries to put on hold approval to new schemes till April 2021, barring those announced under the Prime Minister's Gareeb Kalyan Yojana and the Atma Nirbhar Bharat package.

"The government is attempting to save Rs 1-2 lakh crore by controlling expenditure, cancelling DA instalments and directing a number of ministries and departments to restrict expenditure in the first quarter. If the policy remains the same in the remaining part of the year, it may end FY21 without any expansion in expenditure," says former Economic Affairs Secretary Subhash Chandra Garg. 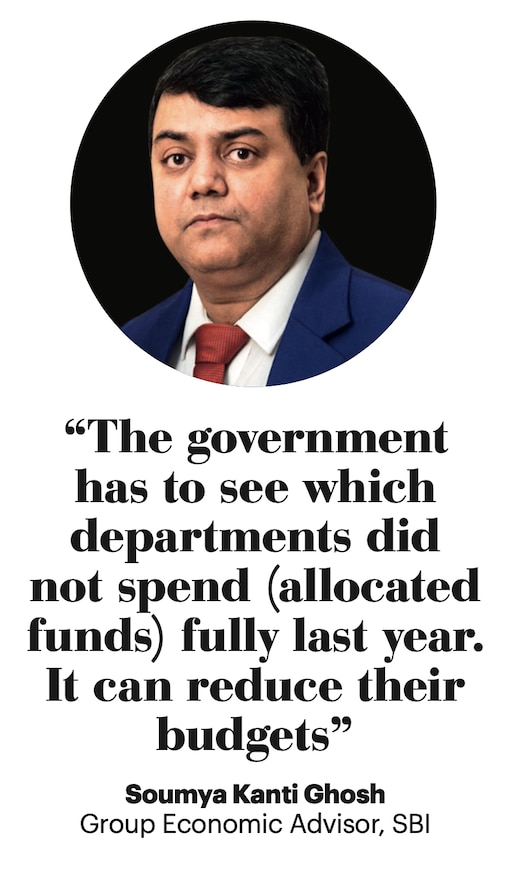 Though the government has announced a 50 per cent increase in borrowing in FY21, most experts say the extra Rs 4.2 lakh crore will mostly cover the wide revenue shortfall this year. Unless it announces another round of borrowings, it is likely to stick to its Rs 30.5 lakh crore expenditure budget.

The expenditure secretary has suggested that the government will prioritise spending and may reallocate funds from capital expenditure to revenue expenditure and vice versa (if needed), and also switch funds from one ministry to another, depending on its assessment of which spending adds more value.

A look at expenditure trends for the first month (April) of FY21 shows 20 per cent rise in expenditure to Rs 3.07 lakh crore compared with Rs 2.54 lakh crore in the previous year. This could be due to frontloading of expenses by some ministries. The ministry of agriculture and family welfare spent 15 per cent of the annual budget in April compared to 5 per cent in April 2019. The ministry runs the PM KISAN Scheme, under which the government gives Rs 6,000 a year to small farmers. The rural development ministry spent Rs 38,058 crore, 31 per cent of the budget estimate. It had spent Rs 16,765 crore, 14 per cent of the budgeted amount, in April last year. The health and family welfare ministry spent close to Rs 13,000 crore, or 19 per cent of budgeted amount, during the month. A lot of this could be due to frontloading of spending. For example, the revenue department under the ministry of finance spent Rs 15,403 crore in April 2020 compared with Rs 140 crore in the same month the previous year. The reason is that it paid states more from the Centre's tax pool in advance. The expenditure secretary says the government has released 110 per cent of what it has collected as tax revenue to states so far. The Centre transfers 42 per cent of its tax collections to states during a year.

Soumya Kanti Ghosh, Group Economic Advisor, State Bank of India, says the government should look at rationalisation of department budgets. "The government has to see which departments did not spend (allocated funds) fully last year. It can reduce their budgets. It can prioritise and shift some spending to healthcare, rural and agriculture departments," he says.

Despite the likelihood of a 5-10 per cent contraction in the economy, the government has not shown much interest in going overboard with a Keynesian expansionary fiscal policy. The Rs 21 lakh crore Atma Nirbhar Bharat was more a credit-based package whose fiscal cost is only around Rs 2 lakh crore.

Experts caution the government against being too tight-fisted and say too much fiscal fundamentalism can be detrimental in these situations. Lekha Chakraborty, Senior Economist at the National Institute of Public Finance and Policy, an autonomous research institute of the Ministry of Finance, says expenditure compression will be costly. "I don't recommend any cut in spending. May be capital expenditures can be postponed but compressing revenue expenditure will create further issues. It's a kind of fiscal austerity I dont recommend. Instead of that, they should be more innovative in financing debt," she says.

Instead of cutting expenditure, the government should try innovative ways of raising money such as issuing long-term or perpetual bonds so that there is no immediate need for repayments. Some experts also say the government should take the bold step of printing money without worrying too much about high inflation or rating downgrades.