States are facing a funds crunch. As GST revenues moderate and fiscal deficits balloon, they must look for new sources of revenue to fund welfare schemes and infrastructure needs

In the recent Delhi elections, in which the incumbent Aam Aadmi Party (AAP) scored a resounding victory, the issue of politicians doling out freebies (a charge levelled at AAP for providing subsidised power and water, among other things) to win votes was the talk of the town. Fiscal fundamentalists - those who want governments to keep a tight leash on 'unproductive' spending - have always fretted over subsidies and free basic amenities saying these put unnecessary pressure on finances of governments, which in turn may try to exact more from honest taxpayers.

However, the other states are not as lucky. With Goods and Services Tax (GST) collections, the mainstay of states' revenues, way below target, shortfall in compensation promised by the Centre for revenue losses due to GST implementation and limited fund-raising avenues, finances of most states are in tatters. These factors may push the average fiscal deficit of states towards 3 per cent of GSDP from 2.6 per cent - excluding Ujjwal DISCOM Assurance Yojana (UDAY) payouts - affecting their ability to spend on infrastructure and other schemes.

The plight of states was summarised by Kerala Finance Minister Thomas Isaac while presenting the state Budget this year. "The average growth of state expenditure from 2013/14 to 2018/19 was 16.13 per cent whereas revenue income during the period rose only 13.26 per cent. This gap between income and expenditure has accelerated the crisis ... the revenue deficit can be reduced and the state led towards a stable financial path by increasing revenue income by 18-20 per cent. However, the expected growth in GST collections has not materialised."

While some states like Tamil Nadu, Karnataka, Gujarat and Maharashtra continue to fare better than most, the others are facing challenges.

To understand why states are struggling, let us look at their sources of revenue. States' revenue comes mainly from four sources - own tax revenue, own non-tax revenue, share of central tax pool and grant-in-aid. Own tax revenue has components such as state GST, share from integrated GST (IGST), state excise (levied on alcohol), state VAT/sales tax (largely on petroleum goods), stamp duty, land revenue, property tax, etc. On the basis of 2019/20 aggregate tax revenue projections, state GST (including share from IGST) accounts for 40-45 per cent, VAT/sales tax 20-25 per cent and state excise 10-15 per cent of states' own tax revenue.

Non-tax revenue includes interest, dividend/profits, royalty, receipts from irrigation, forestry/wildlife, etc. Another big source is share of central taxes. The Finance Commission decides the proportion in which the Centre's tax revenues have to be shared with states. The 15th Finance Commission has recommended that the Centre devolve 42 per cent of its tax kitty to states from 2021 to 2025. How this 42 per cent is shared with each state depends on criteria such as population, area, per capita income (the lower the per capita income, the higher the allocation), performance in controlling population, etc.

The fact that per capita income (45 per cent), area (15 per cent) and population (15 per cent) together have 75 per cent weight means states such as UP, Bihar and MP get a larger chunk of the funds while southern states like Kerala, Tamil Nadu and Karnataka get a lower share. This has become an area of contention among states. The Centre's grant-in-aid includes the Union government's contribution to central government schemes and a few more grants recommended by the Finance Commission.

A look at state finances is enough to show their high dependence on central funds. In 2018/19, out of states' total revenue, own tax revenue contributed 44 per cent, own non-tax revenue 8 per cent and share in central taxes and grants 27 per cent and 21 per cent, respectively. Own revenue (tax, non-tax) accounted for 52 per cent while the rest, 48 per cent, came from the Centre. The contribution of own revenue to total revenue receipts has been coming down since 2015/16, when it was 55 per cent. Bihar, Uttar Pradesh, Madhya Pradesh, West Bengal and Chhattisgarh generate less than 50 per cent revenue on their own and depend largely on share of central taxes and grants. For Haryana, Maharashtra, Gujarat, Tamil Nadu and Kerala, the figure is 70 per cent-plus. 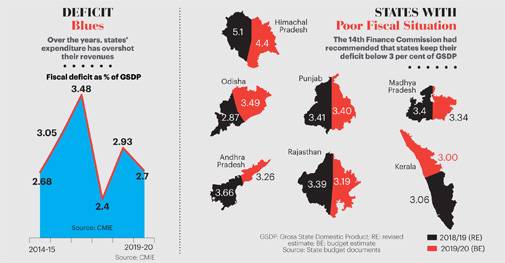 States' growing reliance on Centre is a worrisome trend that has become worse with GST. "The GST replaced many indirect taxes levied by states. As a result, states rely on the central government or the GST Council for majority of their revenue, with variations across states," says a November 2019 Moody's report. The report says GST has limited states' flexibility in raising revenue. The Comptroller and Auditor General of India pointed at a similar trend in its report on Kerala: "The share of the state's own tax revenue in revenue receipts fell from 65 per cent in 2013/14 to 56 per cent in 2017/18, indicating low tax revenue growth when compared with other components of revenue receipts."

GST, the tax reform India was waiting for decades, finally came into force in July 2017. However, it reduced states' tax sovereignty. Most state taxes such as VAT and sales tax have been subsumed into GST and states cannot unilaterally fix GST rates. The decisions are taken at the GST Council, comprising representatives of all states and the Centre. Any decision has to be passed by a 3/4th majority with the Union government having a weight of one-third of the votes cast. State GST, which has replaced VAT/sales tax in states, now accounts for 40-45 per cent of states' own tax revenue. Overall, state GST now accounts for 20 per cent of states' total revenue, and states do not have control over the rates and the manner of collection. GST collections, as pointed out by the Kerala finance minister, have not been as per expectations. This has put a drag on state finances. For example, Kerala had budgeted for Rs 29,000 crore SGST collections in 2019/20. In its budget, announced recently, it revised this by Rs 5,300 crore to Rs 23,700 crore.

Nationwide GST collections have been less than expected with average monthly collections in the first 10 months of the year at Rs 1.02 lakh crore as against the target of Rs 1.1 lakh crore. The government is looking at an overall (state & centre) shortfall of around Rs 1 lakh crore. Any shortfall in states' GST revenue is supposed to be compensated by the Centre. But now, with the Centre itself facing a serious revenue crunch - it has to revise its gross tax collections lower by almost Rs 3 lakh crore in 2019/20 - it is unlikely to be in a position to pay the full compensation amount. Ratings agency ICRA expects a shortfall of Rs 15,000-25,000 crore in the compensation cess balance. Jayanta Roy, Group Head, Corporate Sector Rating, ICRA Ltd, says: "ICRA projects GST compensation required by all states for October 2019 to January 2020 at Rs 60,000-70,000 crore, which the Centre is likely to disburse to them in the remainder of 2019/20.

Given the balance of around Rs 17,000 crore available in the GST Compensation Fund in December 2019, and the amount of compensation cess of around Rs 28,000 crore estimated to be collected in the January-March quarter, this suggests a shortfall of Rs 15,000-25,000 crore in the GST compensation fund in the current financial year." If this happens, the statement by West Bengal Finance Minister Amit Mitra after the GST Council meeting on December 18, 2019, may come true. "From the projection that the central government made in its presentation during the meeting, it appears that there would be no money left by February 2020 to compensate states," he had said.

The central government has already delayed payment of compensation to states, leading to some states threatening legal action. The Centre had promised to compensate states for revenue losses till 2022. The 15th Finance Commission report says non-GST taxes of states should show a significant improvement in rate structure, compliance and collections as these taxes have shown lower buoyancy than taxes subsumed under GST.

However, when it comes to non-GST tax revenues, some states, such as Gujarat and Bihar, face a peculiar situation. Both have banned sale of alcohol and, hence, get nothing from state excise, which accounts for 24 per cent of own tax revenue of some states. The Finance Commission has also asked states to rationalise fees and user charges of services like irrigation, forestry and wildlife so that non-tax revenues keep pace with GSDP growth. According to the Finance Commission report, these revenues grew at a trend rate of 9.9 per cent between 2011/12 and 2017/18. For example, Kerala earned Rs 9,034 crore (81 per cent of non-tax revenue) through state lotteries in 2017/18. However, a CAG audit found that an equally high expenditure of Rs 7,628 crore on distribution of prizes, agent commission, etc, reduced the net yield (from lotteries) to Rs 1,406 crore during the year.

The Finance Commission expects 12.76 per cent revenue growth between 2018/19 and 2020/21. But the quality of expenditure is unlikely to see an improvement. According to CMIE data, almost 80 per cent of the money is spent on revenue expenditure, which is basically the cost of running the government. Only a paltry 14.5 per cent is spent on asset creation while 6 per cent goes into debt servicing. There has been no improvement in these numbers (spending on asset creation and servicing of loans) since 2015/16. In fact, interest costs as percentage of expenditure have risen from 3.62 per cent in 2015/16 to 5.5 per cent in 2019/20. With the Centre expecting state governments to contribute 38 per cent funds for its ambitious Rs 103 lakh crore infrastructure pipeline by 2025, the plan could turn out to be a pipedream if states finances do not improve. States' total annual capital outlay at present is Rs 5.5 lakh crore; the plan requires them to spend around Rs 8 lakh crore on infrastructure alone every year.

Not just the quality of spending, states' total fiscal deficit is likely to worsen in the next financial year, say analysts and economists. India Ratings and Research expects the aggregate fiscal deficit of states to come in close to 3 per cent of GDP in 2019/20, higher than the budgeted 2.6 per cent. It expects states to continue witnessing revenue pressure in 2020/21 as GDP growth is likely to be low next financial year. India Ratings expects states' revenue account on aggregate to clock a deficit of 0.4 per cent of GDP in 2020/21 compared with the 2019/20 budgeted surplus of 0.01 per cent. The 2.6 per cent fiscal deficit budgeted for 2019/20 does not cover interest cost and repayment of UDAY loans.

The Reserve Bank of India (RBI) pegs UDAY outstanding dues at Rs 1.97 lakh crore by the end of March 2020. Under UDAY, state governments had taken over 75 per cent outstanding liabilities of DISCOMs in the form of grants or equity. As many as 16 states had signed comprehensive financial and operational turnaround agreements under. The programme was funded through UDAY bonds worth Rs 2.1 lakh crore. According to the RBI, finances of these states in bond issuance years (2015/16 and 2016/17) were significantly impacted. Interest payments, redemptions and funding of DISCOM losses continue to impact state finances.

State governments are mandated to fund a progressively greater share of DISCOM future losses from their own finances and prevent ballooning of losses on DISCOMs' books. The impact of this on state finances could increase significantly in 2019/20 and 2020/21, says the RBI.

With hands tied down by the Finance Commission, which requires them to keep fiscal deficit at 3 per cent of GSDP and keep their total borrowings at 3 per cent of internal revenue, states are in a tight corner even as they see no buoyancy in their own revenue growth.