State laws may delay progress of Centre's agri-marketing reforms, but won't be able to halt them

On November 13, representatives of 29 farmer organisations from Punjab met two Central ministers at Vigyan Bhavan, New Delhi. Minister of Agriculture and Farmers Welfare Narendra Singh Tomar and Railways Minister Piyush Goyal were trying to find a solution to the protests that have been going on since the last two months against three recent Central laws that liberalised agricultural goods trade in the country. The agitation had left Punjab, the epicentre of the protest, in a state of chaos. Farmers blocked rail tracks, but the railway ministry refused to restore goods train services citing security issues, even after protestors had cleared the tracks. As a result, outflow of food grains from the state, and inflow of goods (fertilisers, coal and essential goods) into Punjab remained stuck. The seven-hour-long meeting was expected to find ways to resume rail traffic, and pacify the agitators, but nothing happened.

No other state had seen protests similar to Punjab, but farmers across the country, especially from states where non-BJP parties are in power, feel the new Central laws will jeopardise income security. The protests received support from three Congress-ruled states - Punjab, Rajasthan and Chhattisgarh - where governments passed laws to nullify the effect of the Central legislation. With other non-BJP ruled states such as Telangana, Maharashtra and West Bengal also looking to explore similar options, the Central governments decision to call farmers to the negotiating table made sense. 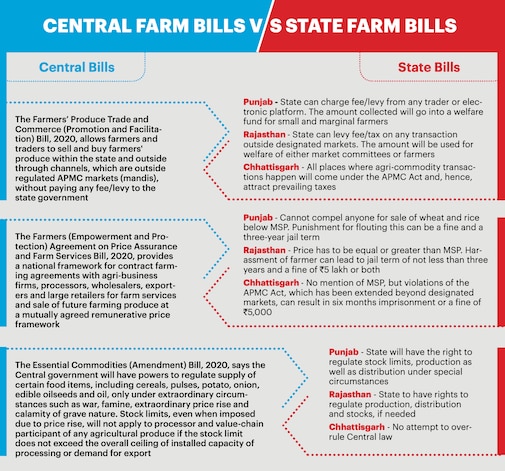 The three reforms are considered by the Centre as their "1991 moment" in agriculture, suggesting that the changes are as important as the reforms undertaken by the Narasimha Rao government in 1991 to open up the Indian economy. The reform is expected to yield high results for Indian agriculture, which is at the cusp of historic growth. Production of food grains has been increasing year after year, and is expected to hit a record 144.52 million tonnes during the 2020-21 Kharif season. India's agri-exports have also been on the rise. While commodity exports declined 5.12 per cent in October, exports of farm produces surged - rice (113.62 per cent), other cereals (378.23 per cent) and oil meals (78.57 per cent), to name a few. In fact, agriculture has been the only engine of economic growth that remained resilient even during Covid-19. GDP growth declined 22.8 per cent during the April-June 2020 quarter, but agriculture grew 3.4 per cent. Solving states' problems and farmer protests are essential for building on the momentum. So now the question is, will it derail the Centre's plans?

Niti Aayog Member Ramesh Chand, the agriculture economist who helped the government draft these laws, says if implemented in the right spirit, these will take Indian agriculture to new heights. "The reforms have generated optimism that India will become a global power in agriculture and a powerhouse for global food supply. The reforms carry the seed for farmers' prosperity and transformation of the rural economy, and to make it a growth engine of the economy," he adds. According to Chand, The Farmers' Produce Trade and Commerce Act gives farmers the choice to sell their produce within APMC (government-licensed) markets or outside to private channels, integrators, farmer producer organisations (FPOs) or cooperatives either through a physical market or on an electronic platform or directly at farm or anywhere else."It has no intent or provision to tamper or dilute MSP and poses no threat to APMC markets," he says.

Similarly, The Farmers' Empowerment and Protection Agreement on Price Assurance and Farm Services Act has a provision for guaranteed price, input and technical services to farmers by registered individuals, companies, cooperative societies, etc., under a mutually acceptable agreement between the farmer and sponsor prior to production. "This Act intends to insulate interested farmers, especially small farmers, against the market and price risks so they can go for the cultivation of high-value crops without worrying about the market and low prices in the harvest season," says Chand. He sees the modification in the Essential Commodities Act (ECA) for a group of agri-food commodities as an attempt to "specify a transparent criteria in terms of price trigger for imposing ECA rather than leaving it to arbitrary decisions by bureaucrats to invoke the Act."

Chand says these reforms can usher in major changes, including rise in agrarian income, increase in export competitiveness, more sectoral investments, value addition in farm produce and implementation of the One Nation, One Market concept.

Sachichidanand Shukla, Chief Economist, Mahindra Group, says the current disruptions may cause some delay in the participation of some states, but the change is bound to happen. "Given that we are a federated democracy, we have a history of staggered implementation of these kinds of policies. When VAT (Value-Added Tax, precursor to Goods and Services Tax or GST) was implemented, some states did not opt for it initially. States such as UP joined towards the fag end, and it took five-seven years for the whole country to play ball. Tomorrow, state A may agree, but B may oppose. This is something that will continue to happen. But as benefits become evident they will join. So, in the medium term, it is a huge positive," he says.

Shukla feels eventually, price discovery under the new system will be better, but, private sector participation will come with a lag. "Entrepreneurs and corporates will be willing to commit capex or opex only when there is greater clarity that things are on an even keel between the Centre and states when it comes to policy certainty etc," he adds.

The reason why Indian agriculture is facing tailwinds is that people globally have begun to factor in the possibility of food scarcity. "Due to technology, production and supply chain people thought 'food scarcity' was a problem that the world has overcome. Suddenly because of Covid there are certain countries or pockets where they have to ration food. This is something that we have seen only in 1970s and 1980s. So 'food security' has become paramount from nowhere. Developments that create efficient supply chains and inventory management will help India tap this opportunity with high-margin value-added agri produce because India is producing more than what it needs," says Shukla.

Former Union Agriculture Secretary Siraj Hussain downplays the impact of the protests, saying one factor alone cannot determine investment decisions in a sector. "It also depends on investment climate - law and order, availability of electricity, level of bureaucracy, connectivity to road, rail etc. So procurement price, the price at which raw materials are bought, is only one of the factors. If it was not so, then all wheat-processing units would be in North India. But, there are so many units in Odisha, as well as in southern states. It also depends on where the investor belongs to because not all of them are big companies. They would like to remain closer to their homes," he adds.

Protesting states may have tweaked the law to make sure no transaction can happen in the state without paying levies and charges applicable inside registered mandis, but these charges themselves are coming down. "One good fallout (of the Central laws) is that the market fee itself has been reduced in many states. If that will not impact the state's investment in infrastructure development in mandis, it will provide both options (private and government-controlled markets) to the farmer," says Hussain.

Agitating farmers have called for intensification of their protests in many parts of the country, including Delhi. But the pace of protest is unlikely to remain the same if the government's food grain procurement plans and MSP announcements continue even after the new laws are implemented. The Centre may also see state laws not getting necessary approvals from the President. It can lead to Constitutional Centre-state issue, but will allow the government to carry out its agricultural reforms without glitches.

Only time will tell whether and how much private investments transform Indian agriculture post implementation of farm laws. Till then, it will be wait and watch.