India and the US are likely to restore some trade concessions, but an FTA is still years away

On July 22, Commerce Minister Piyush Goyal tweeted a video with a message that India and the US are on the cusp of a limited trade package. "I believe we have a quick trade deal, which has some of the pending matters, built up over the last couple of years, which we need to get out of the way quickly. We are almost there, another couple of calls and we should be able to sort them out," Goyal said.

The minister's words, which signalled the beginning of the end of retaliatory trade, lifted the spirit of hundreds of Indian exporters. It brought back hopes of regaining some of the export incentives such as zero tariff, which had given sections of Indian manufacturers an edge in the US market until recently. A possible truce means more opportunities for Indian exporters in the US, the worlds largest export market, and the only major export destination where India enjoys a trade surplus. The partnership plan also comes at a time when both countries are trying to distance themselves from China, their biggest trade partner, and opens up the possibility of US companies shifting base from China to India.

A bigger trade deal between the two countries is also on the cards, Goyal said in the video. "I dont know if that can be done before the (US Presidential) elections (due in November) or post the elections, but we need to work towards a much more sustainable, robust, enduring partnership in the form of a Free Trade Agreement (FTA) to which India is willing to work with an open mind, with a willingness to open our hearts and our markets with a corresponding opportunity for Indian businesses in the US." 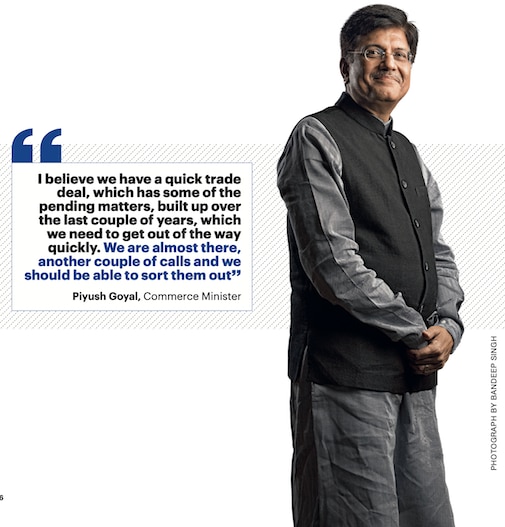 The message comes at a time when Indias foreign trade - exports and imports - are going through tough times. Exports, which were struggling to grow even before Covid-19 induced trade disruption struck, saw a downward spiral in the April-June quarter. The decline in the value of imports was much bigger. In June, for the first time in almost two decades, Indian merchandise exports fell 12.4 per cent, while imports fell 47.6 per cent, resulting in a trade surplus for the month. The India-US partnership plan, therefore, is part of the larger strategy to revive the countrys external trade through a series of agreements, including those with the European Union (EU) and Britain.

As Goyal himself indicates, the imminent announcement will focus on clearing the ground for larger talks. Both countries will make some concessions in their current tariff and non-tariff positions to provide a conducive environment for future talks.

"They (US) will want to show they are getting some duty cuts. We may get them to reverse their decision on GSP (Generalised System of Preference, which allowed India to export nearly 2,000 products at zero tariff to the US) at least partially, and both countries may withdraw the retaliatory measures they have taken," says Manoj Pant, Director, Indian Institute of Foreign Trade (IIFT). The US had begun the tariff war with an increase in import duty on steel and aluminium in 2018. It wasnt India specific, but Indian exports were also impacted. The withdrawal of GSP benefits came next, which altered the duty-free status of Indian goods worth $5.7 billion. In retaliation, India imposed hefty duty on imports, including Harley Davidson motorcycles, walnuts, chickpeas and lentils. It didn't end there. The US measures to curb H1B visas hit Indian IT firms, while India's decision to levy duty on medical equipment harmed the interests of US medical technology majors. Some of these measures may see a reversal once the limited trade deal is announced. And going by the allegations made by a coalition of farmer groups, India has taken the first step. Rashtriya Kisan Mahasangh, in letter to Prime Minister Narendra Modi opposing the India-US trade deal, links the Centres June 23 decision to reduce the import duty on maize and milk powder as the first step in this direction.

Exporters, however, are a happy lot. "The India-US mini deal is a good move. For export sectors, particularly labour-intensive ones, the US is one of the very important markets. And though GSP is not a major concern for most products that were in that list, it could have made a difference for handicrafts, textiles and leather product exports," says Ajay Sahai, Director-General, Federation of Indian Export Organisations. According to Sahai, due to the rising anti-China sentiment, India is likely to align with countries like the US, Japan, EU and Australia to move towards an economic bloc. "It will take time, but strategically our interest lies more with the US, so it makes sense to cement it with some kind of agreement. The India-UK deal is also important as India can gain a lot in services. The UKs import of services from the EU was around $300 billion, so once the UK comes out of the EU, and the free visa regime ends, India will have a chance," adds Sahai.

The direction India is taking is clear. The objective is to move towards bigger trade deals that can enhance the countrys access to developed Western markets. And the move has come despite existing trade agreements, mostly with Asian countries, failing to work in the countrys favour. The new strategy, therefore, has its advantages as well as disadvantages. "Since 1985, India has been using regional trade agreements (RTAs) as political instruments. The peace we have in our neighbourhood in the last so many years is a lot due to the SAARC (South Asian Association for Regional Cooperation) agreement. We offered very good deals to Maldives, Nepal, Sri Lanka, etc, though we knew it was going to make losses for India on the economic front. The India-ASEAN (Association of Southeast Asian Nations) trade agreement is also a very bad deal. The purpose of that was also political - the Look East Policy. The most effective economic instruments, hence, are RTAs with countries you already trade," argues IIFTs Pant. According to him, RTAs are a consequence of trade, they do not create trade. Indias trade with ASEAN is less than 10 per cent of the countrys total trade. Indias trade with Japan and South Korea in commodities is negligible. And that is why RTAs with these countries did not work in Indias favour.

"If the government wants to make economic decisions, where should they look? Who are your major trading partners? The US, Europe and the UK. You should have agreements with them. The added advantage is that you also trade heavily in services with them and you have an edge. Bring services also on the negotiating table," says Pant.

The India-US FTA will provide a template for India to negotiate with major trade partners. But the problem with negotiations with developed nations such as the US is that they already have a template when it comes to trade agreements. In other words, the broad contours of the US demands are well known. And it may not be easy to carve out a fresh negotiation path.

According to trade experts, the FTA template of the US include rules and disciplines around tariffs, services, e-commerce, government procurement, intellectual property rights, labour standards, etc. Each of these will have to undergo tough negotiation as it will decide the transition period for phasing out tariffs, flexibilities in deciding the services that can be excluded from the deal, level of autonomy of central banks, etc.

Ashwini Mahajan, National Co-Convener of Swadeshi Jagaran Manch (SJM), the affiliate organisation of the RSS that advocates self-reliance over global trade, says a bigger FTA with the US may not be possible at all if the latter sticks to its template. "We know the items on the US menu. E-commerce is there, digital economy is there. So are IPR, agriculture and dairy, capping of prices of medical equipment, tax on Harley Davidson motorcycles, and other items. But Indias stand on these issues is also very clear and non-negotiable. That is why the India-EU FTA has not progressed despite four dozen bilateral meetings," he adds.

According to SJM, India and the US may announce a limited trade deal, but not a bigger FTA. " SJM is not against global trade agreements, but those agreements should be in the best interest of the country. What the US wants from us, India is not in a position to give. What face will the government will show if we accept the US terms of e-commerce? How can we accept the US demand for free flow of data when the government has already taken its position on data localisation? How can we allow 3D (the clause that restricts the patentability criteria) to be abolished from the Indian Patent Act? How can we allow the US to have free access to Indian markets when our agriculture is facing so many problems? How can we give in to their demand for lifting the cap on medicines? I dont think the India-US trade deal will see the light of the day in the present form," says Mahajan.

Goyal seems to have a different view, at least for now. In fact, he proposes an interim solution in the video message. "We believe there should be an early harvest in the form of a preferential trade agreement so that rather than waiting for the gains of an FTA, which may take several years to conclude, we may look at an early harvest of may be 50-100 products and services where we can engage with mutual trust and an open spirit so that the partnership between India and US can kick start much faster," he said.

The progress of India-US FTA, beyond the limited deal that will be announced soon, will therefore depend on how quickly India can take a position on how to deal with the US template, and not the other way round.