The Curious Case of WHO Funding On April 15, President Donald Trump tweeted that the US is halting funding of the World Health Organization (WHO) and will carry out a review to assess the agency's role in mismanaging the coronavirus outbreak. In a quick response, the same day, billionaire philanthropist and Microsoft Co-founder Bill Gates said in a tweet that ending support for the WHO during a world health crisis is as dangerous as it sounds. "Their work is slowing the spread of Covid-19 and if that work is stopped, no other organisation can replace them. The world needs WHO now more than ever," Gates tweeted.

Both tweets carry immense weight. The US government is the biggest donor of the WHO. Bill and Melinda Gates Foundation (BMGF) is the second-largest. Both entities together account for nearly a quarter of the WHOs $5.3-billion funding expected from various quarters for the 2020-21 biennium. Any disruption in the fund flow can impact the budgetary plans of the WHO, half of which goes into managing acute health emergencies and polio eradication programmes across the world. The tweets suggested that the credibility and financial flexibility of the 72-year-old organisation was at stake, or at least the US wanted to give that impression, at a time when the WHOs efforts are needed most.

Technically, a shortfall here can be compensated by someone else there. But in the WHOs case, that may not help. Only a small portion of the funds from WHO member-countries, including the US, comes as assessed contributions or un-tied membership-linked regular contributions. This revenue - contributions from member states and associate members recorded annually at the beginning of the year according to assessments approved by the World Health Assembly - has been shrinking as a percentage of the WHO's overall budget for several years now. What has been increasing is voluntary contributions like the ones given by the Bill and Melinda Gates Foundation where the money can only be used for a specific purpose. In other words, you cannot always replace one funding source with another. "The WHO is already grossly underfunded, and so many of its disease-control programmes will face cuts, although it is unclear whether or how new commitments from China will be channelled. An accompanying problem is the potential loss of legitimacy of the WHO and the disintegration of the international cooperation that is central to addressing global health concerns," says Anne-Emanuelle Birn, Professor of Critical Development Studies and Global Health, University of Toronto, Canada. "The WHO should heed democratic governance, as per its 1948 Constitution, with an ample dues-based budget, independent science-based decision-making, and democratic agenda-setting drawn from guidance from its annual World Health Assembly. Not only is the WHO's current $2.4-billion annual budget inadequate to the extreme, but the donor stronghold over 80 per cent of that budget means that the agency's agenda is set by special interests instead of people's health needs," she adds.

Tied funds are useful when countries grapple with pandemics such as Covid-19. In fact, over 4.5 per cent of the WHO's biennium budget for years 2020 and 2021 is the Covid-19 Strategic Preparedness and Response Management Fund committed by various member-countries and entities. Around 20.43 per cent of the WHO's budget is exclusively meant for eradication efforts of diseases such as polio. The problem comes when the WHO needs money to develop technical expertise elsewhere, but finds it difficult to divert funds for that purpose.

David McCoy, Professor of Global Public Health at the Centre for Primary Care and Public Health at Queen Mary University of London, says the BMGF's influence will grow even more if the US sticks to its decision to not fund the WHO. "This should be a great concern because the WHO should not be so heavily influenced by an unaccountable private foundation," he says. 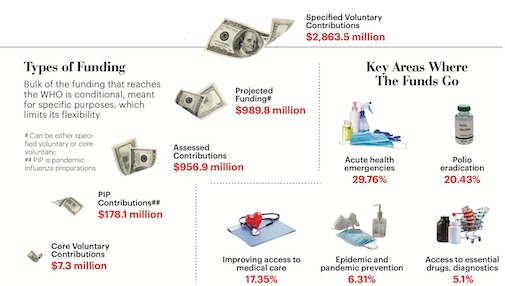 According to McCoy, the most important reforms that should be undertaken in the WHO are financial. "The WHO needs to have a greater proportion of its budget made up of assessed contributions - ones that are not conditional. The technocratic arm of the WHO must be given greater independence to set budgets and priorities, with less donor and political interference. Since the US is the biggest source of funding, the WHO's budget would shrink and the impact of this will depend on the extent to which other counties fill the gap. (However), if US funding is stopped, the WHO would be able to escape the influence of the USA on the agency's functioning, which has not always been positive," he adds.

With a 0.56 per cent share in its funding, India does not play a significant role in the WHO's financial fortunes. But as a stakeholder, India has been a beneficiary of its technical expertise. If Kerala managed to put up a praiseworthy fight against the spread of Nipah before, and Covid-19 now, the essential protocols were available with the WHO. The organisation also sets standards for drug manufacturing, clinical trials etc, which help developing countries like India to adopt them. If the US continues to shun the WHO, it can put bilateral pressure on countries to act on its behalf, and India is not immune to such pressure.

Sujatha Rao, Former Union Health Secretary, says the withdrawal of the US will affect the implementation of some key programmes, but will not have any major impact on Indias interests. "India is a founding member of the WHO. Most of the assistance provided by the WHO is technical in nature. Strengthening of the WHOs technical capability is what we have been discussing for a long time," she says. However, Rao adds that India should be concerned about the increasing dependency of the WHO on donors and tied funds. "If X organisation gives funds for polio eradication, they cannot be spent on any other activity except polio. This then distorts priorities as activities are taken up not in accordance with the needs of member-countries, but by what the donor wants," she explains.

According to Rao, the increase in private voluntary funding has distorted priorities. "Developing and low-income countries stand to lose the most since they are very dependent on the WHO's technical support. This is also one of the reasons for the gradual neglect of surveillance and infectious disease control programmes, which in reality, is the core mandate of the WHO."

The message is clear. With or without US funding, the WHO has been going through a difficult phase, where its dependence on tied funds has been increasing over the years. The US decision has only given member-countries an opportunity to think about the importance of the WHO and the flexibility it should enjoy in prioritising its health agenda.

Seen from this context, Indias call for reforms in United Nations systems made by Prime Minister Narendra Modi during his recent G20 address is just another reminder that it is time for change within the UN and its arms, including the WHO.