To mark our sixth anniversary, we celebrate iconic writing instruments launched over the last six years. 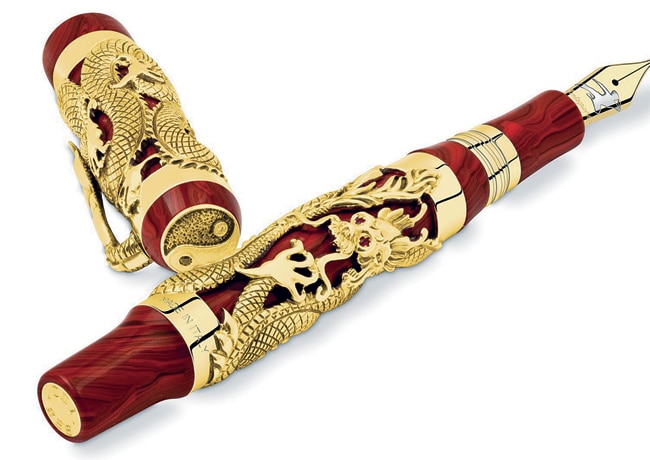 Montegrappa Bruce Lee Fountain Pen
Montegrappa Bruce Lee Fountain Pen
Montegrappa commemorated the 70th birth anniversary of martial arts legend Bruce Lee with this pen of significance (a part of the marquee's Icon series). While the cap and barrel feature exquisitely carved sterling dragons, the nib - in 18-carat gold - features the profile of the martial arts star and the crown fashions a perfect Yin-Yang. Available only through auction with prices estimated at Rs 27 lakh onwards.

Caran d'Ache Yuri Gagarin
Caran d'Ache Yuri Gagarin
To mark the 50th anniversary of the first manned spaceflight on April 12, 1961, Caran d'Ache created a prestigious Yuri Gagarin Limited Edition that paid homage to the Russian astronaut. Only 50 fountain pens and 50 roller pens - all gold-plated - were produced for the edition. The pens are made of black lacquer, the cap features Gagarin in his spacesuit, and the clip is set with a black diamond - all evoking the infinity and darkness of space as well as the sparkle of the stars.
Price on request.

2012
Graf Von Faber Castell Pen of the Year 2012
An ode to supreme craftsmanship, Faber Castell's Pen of the Year 2012 blends the hue, textures, and richness of 1,700-year-old German wetland oakwood and yellow gold. The intricate and detailed process of the 24-carat gold leaf gilding technique used in the instrument dates back to the Egyptian era, over 4,000 years ago, and the crown features a chessboard-faceted citrine gemstone. This handcrafted marvel is limited to 1,500 pieces.
Price: Rs 2.92 lakh.