Argentum Motors wants to first build powertrains and then do full-fledged vehicle assembly at the erstwhile Daewoo Motors facility in Surajpur.

B V.R. Subbu, former President of Hyundai Motors India, has lost neither his charm nor his wit. In the 30 minutes it has taken him to drive from his South Delhi residence to the old Daewoo factory, he has managed to talk about what he has been doing for the last 18 months, since he left his former employers. Evidently, he has been dabbling in a lot of things, zipping across the world and much of it sounds rather fanciful. But once you enter the freshly-painted gates of the old Daewoo Motors factory at Surajpur, you see that behind the bluster, there is substance.

Conveyor forklifts
The faded Daewoo Motors logo still lords above the gate. Of course, Subbu and his partners Ajay Singh, a promoter of SpiceJet, and Ashish Deora, a broadband entrepreneur, acquired the plant and all its buildings and machinery in the middle of 2007 for Rs 765 crore. They called the company they formed for the purpose Argentum Motors after the chemical name for silver.

Ironically, Subbu was the man behind the aggressive marketing campaign for Santro, which launched a few weeks after the Daewoo Matiz. It was this marketing prowess that made Matiz sales falter. And when the parent company went belly-up, the Korean expatriates packed up and left.

Inside, the plant looks desolate. At one time, this plant employed 2,000 workers; today, Subbu is one of a handful of managers sitting in the vast 120,000 sq. ft office and research complex. Outside, some contract labourers are busy refurbishing some buildings and there are others who are trying to get the factory’s 40 MW power plant operational. “Without the power plant, nothing will be possible in here; that is why it is our first priority,” Subbu explains.

B.V.R. Subbu
Priority, since Subbu and his partners plan to tap the increasing market for automotive outsourcing, not just in manufacturing but also in engineering and design. “Look at companies like Hyundai and Suzuki. They are keeping costs low by deciding to globally source models like the i10 and A-Star from India. The only way European companies will be able to compete on price is if they send engineering work to India,” Subbu says.

And Subbu wants Argentum to concentrate on powertrains—that is, engine and transmission manufacturing. This is because Daewoo Motors had developed one of the most high-tech engine and transmission lines in India at this plant. He walks around this building, which, literally, looks like a ghost building with hundreds of machines sitting idle and thousands of assembled engines packed and ready for export sitting on the floor. “Daewoo was very profligate with its investments, and this plant will still be considered high-tech today,” Subbu says. But it looks like a ghost town. Machines that are supposed to be cutting, drilling and shaping gear cogs are lying silent. But Subbu proudly says, “When we did our due diligence, we were amazed that every single machine worked. The workers at the plant who could have easily damaged these machines— and it doesn’t take much to do that—did not do so. Instead, a group of workers actually took care of the plant and machinery.” 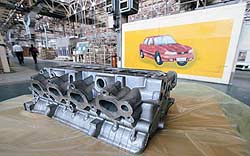 Aluminium engine block sites near a Cielo painting
But at the same time, while building powertrains for the world, Subbu says that the company can make a more attractive value proposition. “We could potentially do full-fledged vehicle assembly here. The idea being that companies with small production lines will not need to set up their own facilities here.” And the main selling point: India’s better respect for intellectual property laws compared to China.

Of course, the ultimate plan is for Argentum to move from being a simple contract manufacturing unit to working with manufacturers to help them develop a new generation of powertrains and vehicles. The company is on the verge of signing a big-ticket deal with a European design-software firm, which will set up a training centre at the plant itself. Daewoo Motors India had invested heavily in testing equipment; some of those still lie unused. “Upgrade the computers and we will have better equipment than almost every car manufacturer or agency in India,” Subbu says.

The passenger car assembly building
Walking into the testing facilities, one senses the suddenness with which the factory was shut down. There are a few updated ‘Matiz II’ cars parked, some rusting Daewoo Cielo side panels are still stocked up, and even more eerily, a paint shop has some half-finished Matiz shells on the line. The factory itself looks relatively well-maintained. Subbu, however, says that the final assembly line is not in great shape yet. “But that is about it. The engine and transmission line, the power plant, the plastic mouldings line and the testing facilities are all in working order. Once we get the power on by the middle of next month, this place will be humming again.” 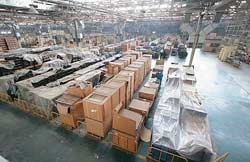 Ready-made engines once destined for export
There are few workers but they look relatively pleased. Probed on this, Subbu says with a bemused smile: “I think they are happy that we are serious about this and we have the credentials.” The smile is also perhaps because, ironically, it was Subbu himself who orchestrated the advertising campaign for Hyundai against the Matiz. “I still think it was a good car, badly marketed. I did what I had to do; I don’t think the folks at Daewoo did their job very well.”

Whether Argentum is a success or not will only be known in future, but for a few hundred workers at the old Daewoo plant, this means the work can finally start again.