Planners, chocolatiers and even software makers are cashing on Indian weddings

Indians spend $25 billion a year on weddings. Planners, chocolatiers and even software makers are gatecrashing the party.

Planners, chocolatiers and even software makers are gate crashing the party.
Anumeha Chaturvedi
In the 2010 film Band Baaja Baaraat, whose protagonists run a wedding planning agency in a dilapidated market in Delhi, the story plays out against the backdrop of the ground realities of the business. It is not all fantasy: these days, even those who want simple weddings, such as Himani Dalmia, scion of a well-known Delhi-based business family, hire a professional wedding planner.

"Ours is a business family, but we are also well known in the art and academic world," says Dalmia, whose father is Chairman of Dalmia Continental. She wanted a simple, traditional wedding, planned mostly by family members. But she also roped in Bangalore-based Lakshmi Rammohan, a friend and founder of Dreamweaver Weddings, a wedding planning agency. "Lakshmi previously worked at the Olive Bar & Kitchen in Bangalore, and had handled some of our events there," says Dalmia. She figured that getting professional help would allow her relatives more time to enjoy the event.

Click here to Enlarge
Rammohan has planned 11 weddings so far, mostly for middle-and upper middle-class families, with budgets ranging from Rs 7 lakh to Rs 1 crore. She charges a nonrefundable Rs 20,000 fee for initial estimates, and says the rest of the fee is less than 15 per cent of the wedding budget. "It is heartening that even people who spend Rs 7 lakh on a wedding want a planner," says Rammohan. Hiring professional planners, then, is no longer the preserve of industrialists and stock market hotshots.

Mumbai-based Candice Pereira and Jarret D'Abreo, who started a wedding planning agency called Marry Me four years ago, say they have worked on budgets ranging from Rs 10 lakh to a couple of crore, for weddings in Mumbai, Goa, Chandigarh and Britain. Its fees start at Rs 2 lakh, and its owners say they expect business to grow at 15 to 20 per cent a year. They plan to open offices in Delhi, Goa and Rajasthan.

Like Dreamweaver Weddings, Marry Me provides 360-degree solutions for all things nuptial, including venue, food, accommodation and even rides from the airport. "It is a question of organisation," says Rammohan. "We can make Rs 7 lakh work better. A family would follow the trial-and-error method, but we tell you how to prioritise."

"In today's world, with everyone being so busy, having a wedding planner assist you each step of the way is a necessity," says Pereira. Meher Sarid, one of the country's first wedding planners - she started out in 1992 - says business is booming as aspiration levels are rising. In 2002, she started Wedding Art, a unit that fabricates decorative structures. "Like the technology industry, this space is evolving," she says. "Acceptance was a barrier when I started, but now verticals are emerging as separate industries, such as gift wrapping, montage photography, and moment makers, or those who make 15-minute wedding videos," says Sarid. Among her recent clients was Delhi-based cricketer Gautam Gambhir. Sarid handles only two to three large-scale weddings a year. 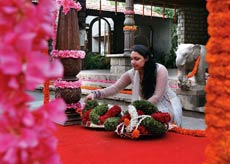 It is heartening that even people with a budget of Rs 7 lakh want a planner: Lakshmi Rammohan
San Francisco-based software development company Veristrat launched a wedding management software for India, called Shaadi-e-Khas, in April 2011. CEO Bharat Kanodia pegs the size of the Indian wedding market - which includes all expenses incurred at a wedding - at about $25 billion, or Rs 1.25 lakh crore, and growing at 25 to 30 per cent a year. Shaadi-e-Khas, which is sold to wedding planners and retail customers, helps manage RSVPs, guests' travel dates, accounts, hotel reservations, providing directions to the venue, and uploading wedding pictures and videos.

"Unlike an Excel sheet, Shaadi-e-Khas makes your work about 80 per cent more efficient by sending you automated reminders for every task," says Kanodia. Customers also get webspace for wedding pictures and videos. The online software also provides a list of 800 pre-screened vendors, including florists, mehndi artists, and videographers. Because it is the only such product in the market, Shaadi-e-Khas is often mistaken for a wedding planning agency. "People who have bought our software sometimes expect us to courier invitations," says Kanodia, with a laugh.

Veristrat's primary target is the young, tech-savvy professional who is working out her or his wedding budget. One such customer is Delhibased marketing executive Smriti Khanna. She and her husband used Shaadi-e-Khas to plan their wedding, and she says the credit for all the lastminute tasks they accomplished goes to the software's automated reminder feature.

"If a million (couples) have Internet access, and if we're getting even 10 per cent of that traffic, we will service about 100,000 weddings a year," says Kanodia. Photography is a growing expense at weddings. Naina Redhu, a Delhi-based graduate of the Symbiosis Institute of Business Management, Pune, got hooked on to wedding photography after shooting her sister's nuptials in 2009. Her forte is candid, personal wedding pictures.

"Today, not everyone wants the usual poses and pictures from the neighbourhood photographer," she says. She has shot 12 weddings so far and charges Rs 1.5 lakh a day. The rate for engagement ceremonies is Rs  50,000 to Rs 75,000.

"Online media like Facebook lets clients see my work before meeting me," she says. Among Redhu's clients is Priyanka Parswani, an ad sales representative in Delhi with a TV network. She hired Redhu for her engagement ceremony last year. "Initially, our parents were apprehensive, as her charges are steep," says Parswani. "But we had seen her work and were very clear we wanted to hire her."

Another important part of a wedding budget is gifts. Delhi confectioner Alka Gupta specialises in chocolates for weddings, and works closely with Karismatic, a wedding planning agency. Her chocolates sell for about Rs 900 a kilo, and she made them for eight weddings in 2010. Karismatic founder Saloni Gupta says: "Earlier, people would buy Haldiram boxes, but a rise in purchasing power has led to a variety of tastes. From hydraulic and revolving stages to LED lighting, they want the best in life."