It could well be the most sought-after stretch of land in India. Five global car majors, two commercial vehicle companies, one tractor manufacturer, three earth moving equipment companies, a tyre major and over 100 auto parts producers have either made it their home or will do so soon. A 45-km-long corridor near Chennai is on its way to becoming one of the largest automobile centres in the world. N. Madhavan checks it out.

It could well be the most sought-after stretch of land in India. Five global car majors, two commercial vehicle companies, one tractor manufacturer, three earth moving equipment companies, a tyre major and over 100 auto parts producers have either made it their home or will do so soon. The 45-km-long corridor— from Tiruvallur, 44 km north-west of Chennai, to Maraimalainagar, 35 km south of the city—will, by 2012, see production of 1.28 million cars, 350,000 commercial vehicles and an unspecified number of tractors and earth moving equipment every year. Biggies like BMW, Ford, Hyundai, Renault-Nissan, Mitsubishi, Apollo Tyres, Caparo Group, Komatsu and Caterpillar all have a presence here. Little wonder then, the place has earned the sobriquet—Detroit of India. 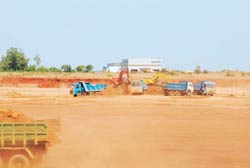 An auto hub in the making: Land being levelled at the Renault-Nissan project site
It is said that the pace of development along this stretch is so rapid that a completely distinct and altered landscape awaits you every time you drive through the corridor— even when your visits are within a gap of a few weeks.

We (photographer G. Keshav Raj and I) decided to check out the transformation first hand and chose the Oragadam stretch for two reasons. First, it is the “epicentre” of this corridor and secondly, it is here that most of the recent investments aggregating Rs 20,000 crore have ended up. The Renault-Nissan combine broke ground for their Rs 4,500-crore small car project spread over 640 acres a couple of weeks ago. UK-based Caparo Industries is investing Rs 300 crore in a car assembling unit; it will also manufacture some auto components here. Japanese earth moving equipment major, the $22-billion Komatsu, has already commenced production at its facility here. That apart, a lot of non-auto investment has come up here with companies like Moser Baer and Nokia-Siemens jumping onto the bandwagon. 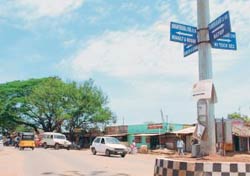 Pointers to progress: Signboards at the Oragadam stretch
We leave Chennai a bit early to escape the morning traffic and reach Oragadam, 40-odd km away, in an hour’s time. An innovative direction mast greets us as we reach the “coot road”—a chaste Tamil translation of a four-road intersection.

The board, apart from showing the nearest towns, is a clear pointer of the commercial activity in this once sleepy, 100-plus-year-old village. Go west and you have Renault-Nissan; north, it’s Caparo and Komatsu. There is an IT SEZ in the east and NATRIP (National Automobile Testing and R&D Infrastructure Project) in the south. We decide to head to the west and come across a beehive of activity.

Ready mix concrete trucks crisscross the road. Land levelling is on at the Renault-Nissan site in full swing and the dust kicked up by the civil works hangs in the air. The people of the village, though amused by the sudden and feverish activity around them, have their share of concerns. One such worry is: will these investments accentuate their water problem? For starters though, the sharp increase in land prices, from Rs 8 lakh per acre four years ago to over Rs 50 lakh now, has made some landowners rich very fast. We also meet K. Sridhar, a local boy who has completed an Industrial Training Institute certification course. He has been unemployed for the past one year. Sridhar hopes these developments will ultimately land him a job.

As we drive north towards the temple town of Sriperumbudur, the large-scale transformation of parched, dry land into huge factories hits us. Hyundai, which set up its base here in mid-90s, has, since, more than doubled its capacity. Huge trucks wait outside the factory to cart the new cars across the country and so do the buses that ferry the staff from all over Chennai. Similar scenes greet us at Saint-Gobain’s world glass complex and Nokia’s SEZ.

Incidentally, Hyundai and Ford were the first global car makers to zero in on Chennai. The Korean company chose Sriperumbudur as its site while Ford opted for Maraimalainagar at the other end. The drive through the stretch reveals that the area connecting these two facilities is abuzz with auto projects and will, in due course, emerge as one mammoth automobile district. 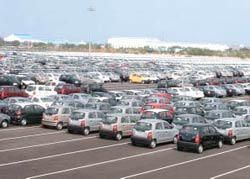 Early entrant: Hyundai was one of the early companies to invest in the region
“Our view is that the automobile corridor near Chennai has the potential to become one of the top 10 automobile centres in the world,” says M. Velmurugan, Director, Guidance Bureau, the single window facilitation office attached to the Industries Department, Government of Tamil Nadu.

While BMW has started work on its plant at the Mahindra World City not too far from Ford India, the Ashok Leyland-Nissan JV project, to manufacture light commercial vehicles and engines, is also slated to be a part of this corridor. “We are currently talking to over 20 investors, both in the auto and nonauto sectors, who are eager to invest in the corridor,” says Velmurugan, without divulging any names.

The prime reason why the auto sector is in top gear in the region is the readily available and skilled workforce. The other big attraction is, of course, the strong auto component base in and around Chennai. On our return journey to Chennai, we sight a few tracts of vacant land on both sides of the road. Their days are probably numbered. Foreign and Indian companies may soon find it easy and cheaper to get land in Detroit, US, than here.