On the turtle trail

The Kolkata-based men's readymade garments company, Turtle, has woven corporate social responsibility into its brand building by taking up a conservation project for its namesake in Orissa. BT’s Ritwik Mukherjee recounts how he felt about this brand correlation. 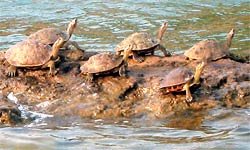 A herd of turtles near the Kathjodi river
Call it brand affinity. Kolkata-based Turtle, the men’s readymade garments company, has woven corporate social responsibility (CSR) into its brand building by taking up the cause of its reptilian namesake.

To get a first-hand feel of this brand correlation, this correspondent and photographer Debasish Paul reach the sandy banks of Kathjodi River, one of the distributaries of Mahanadi in Orissa, which is one of the largest habitats of freshwater turtles in the world.

As we alight from our jeep in Aitalanga village, 10 km off Cuttack, on a bright, warm April morning, local people (all fishermen) flock around, trying to figure out who we are.

“If you are poachers (and if you’ve come here to catch turtles), stay away; and if you are government officials or wildlife activists, make sure that we get compensated for standing up for the dwindling population of turtles,” the oldest member of the group almost shouts.

I must confess that I’m slightly taken aback at his aggression, but quickly collect my wits and shoot back: “What do you mean? And why are you demanding compensation?” 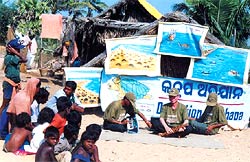 Operation Kachchapa has been a mixed success
Hrushikesh Behra, Secretary of Jarumoli Matsyojibi Society, the local fishermen’s cooperative, who is part of the crowd, explains, after we introduce ourselves: “Poachers from Bangladesh used to come here to catch turtles and paid us for this. But since the launch of Operation Kachchapa (Oriya for turtle) a year ago, we have clamped down on poaching. As a result, the turtle population has grown.”

Often large turtles—some weighting as much as 35-40 kg—get caught in fishing nets, damaging them. Large volumes of untreated polypacks and plastic materials dumped by the Cuttack Municipal Corporation at the mouth of Kathjodi River also get stuck in fishing nets, causing the same damage, he says. Hence, the vociferous demand for compensation from the government. These fishermen help conserve rare species of turtles
Aitalanga is one of the 10 villages where Turtle has taken up the conservation of the freshwater Green and Olive Ridley turtles—in collaboration with the Wildlife Society of Orissa (WSO)—funding conservation projects in downstream Mahanadi, Garihmata, Devi and Jatadhar rivers in Orissa.

It is doing similar work along the coast of Gujarat in collaboration with World Wildlife Fund (WWF) India. A part of the proceeds from the sale of Turtle’s products goes to WSO and WWF India and is used to fund scientific surveys, awareness programmes and conservation projects.

The fishermen at Aitalanga and other villages have never worn any branded shirt or trousers in their life, and are not even aware of a brand called Turtle, but they have all been educated about the importance of conserving the rare marine species that their region abounds in. 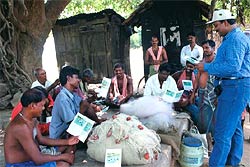 Biswajit Mohanty (in white cap) makes a point
These surveys have thrown up vital information about the high levels of poaching of protected species, including the Chitra Indica.

Following this, the first-ever conservation programme for freshwater turtles was undertaken in January 2006 in the Mahanadi River and covers a stretch of more than 239 km along the river.

It was this conservation effort that helped unearth the poaching network operating in the area, says Mohanty, adding that several poachers were arrested in the last three months alone by the state Forest Department following tipoffs from WSO. In February this year, a raid led to the seizure of 145 turtles, which were rehabilitated and released.

These animals are most vulnerable during the nesting season, from February to April, when large herds, comprising up to 250 members, come to the sandy banks of these rivers to lay eggs. Poachers are most active during this period.

Since it is well nigh impossible to identify and catch them without local support, a buy-in from the local fishing community was a massive step towards saving this endangered species, says Mohanty.

But convincing the local community wasn’t easy. WSO had to counsel them for over six months and also had to compensate them for giving up the “income” they generated by assisting the poachers. Turtles Ladsaria
As we proceed along the Mahanadi, we reach Sankhari Sahi, the base camp of Operation Kachchapa. This is the nerve centre of the project to save the turtle from extinction. WSO officials conduct regular community awareness programmes and group meetings and also take stock of the situation on the ground.

As a result of these efforts, the incidence of poaching has come down quite drastically. “We don’t have the numbers, but I can say very confidently that these turtles are much safer now than they have been at any time in the recent past,” says Mohanty.

But poaching remains very lucrative for those still engaged in it. Turtle meat, considered a delicacy by some people, sells for Rs 350 per kg in Kolkata, the nearest big market and for much more in Delhi, Mumbai and Bangalore. However, thanks to the efforts of WSO and its main financial backer, Amit Ladsaria, Director, Turtle, the future is looking a little brighter for the Olive Ridley Turtle.