If you feel listless at work, you should see a counsellor

If you feel listless at work, you should see a counsellor.

Anand J
Sunil Kulkarni, 29, (name changed) is a supervisor at a fast moving consumer goods, or FMCG, company in Mumbai, with 15 salesmen working under him. For three years, his was the best performing zone in the company. He was always the first in his team to reach office.

Then suddenly his zone's sales graph began to dip and Kulkarni started coming late to work as well. The trend continued for the next two months. Kulkarni's area manager thought he was just being lethargic and was about to give him a severe dressing down. 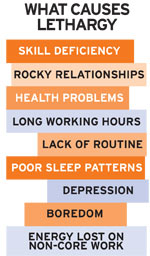 Fortunately, the company's human resources, or HR, department noticed the dip in performance, too, and intervened. It found the competition had reduced the prices of some products, which had hit the company's sales in Kulkarni's zone.

Unable to combat the fall and feeling helpless, Kulkarni had gone into depression. Prompted by the HR department, the company took steps to help Kulkarni recover. It also introduced skill enhancement training for all its salesmen and supervisors.

Dozing at the Desk? Read how to deal with it

Not everyone in a similar jam is as lucky as Kulkarni. Many companies fail to understand why an employee suddenly starts underperforming. The employee is often called simply lazy. In India, depression also carries a stigma, due to which employees are reluctant to seek treatment or advice.

Fortunately, many of the larger, well-managed companies do have sensitive and watchful HR departments. Depression in an employee is noticed early by the line manager, who reports it to HR, which in turn directs the employee to an in-house counsellor. "Problems crop up when the employee is in denial about his lethargy," says G. Ravindran, CEO of Society for Human Resource Management, India, an HR management company. "Or else counselling programmes are usually successful and the employee can be back to normal working hours within three to six months. Of course, complete confidentiality must be maintained."

Ravindran also feels there should be forums on which employees who have suffered from depression can anonymously share their experiences. "The companies should also try to include the families of affected employees in the healing process," he says.

Vasudevan Anand, Director of ICAS India, which provides employee assistance to companies, says they need to break the monotony at work. "Even the energy lost on non-core activities like driving to office can induce frustration and lethargy," he adds.

Poor lifestyle habits can have the same effect. "Excessive consumption of alcohol or caffeine, of junk food and over the counter medicines, and the lack of regular exercise and a daily routine can cause lethargy," says Ashutosh Shukla, Senior Consultant, Internal Medicine, Artemis Hospital. Lethargy is also caused by purely medical reasons such as anaemia, blood pressure problems or bronchitis. Periodic medical check-ups are advisable.