Japanese firms have generally cracked the code of working in India's huge domestic market, but the extent of success varies India's economic engagement with the world may have begun in right earnest after the liberalisation of the economy in 1991 but the country's ties with Japan go further back. India is considered a difficult market for outsiders but in consumer centric sectors like automobiles and durables, Japanese companies have always found remarkable success - Maruti Suzuki, the country's leading car maker, along with Honda, Toyota and Yamaha in automobiles; and Panasonic, Sony, Daikin, Hitachi, Toshiba and Canon in consumer durables are prime examples.

As of October 2018, the number of Japanese establishments in India was 5,102, a number that increased by 5 per cent over 2017. Similarly, there were 1,441 Japanese companies operating in India, which also grew 5 per cent during the year. Over a longer 12-year period, since 2006, the number of Japanese companies has increased by an average of 16 per cent every year. The rising interest of the Japanese corporate sector in India can be attributed to multiple reasons, including the growing proximity between Japanese Premier Shinzo Abe's and Indian Prime Minister Narendra Modi's governments, and increased spending by Japanese venture capital funds in the Indian start-up story.

"SoftBank helped change the perception of investment in Indian start-ups. Because of proximity, Japanese investors are always looking at the South-East Asia market. The US and China (in terms of start-ups) are sometimes difficult," says Yuki Kawamura, Principal, AET Fund (Akatsuki Entertainment Technology Fund). "India was de-prioritised compared to those markets. Because of SoftBank's exit (from Flipkart, where it made close to $2.3 billion on an investment of $1.5 billion), and relationships of our prime ministers, in the last couple of years, investors have started to focus (on India) as an attractive market," he adds. 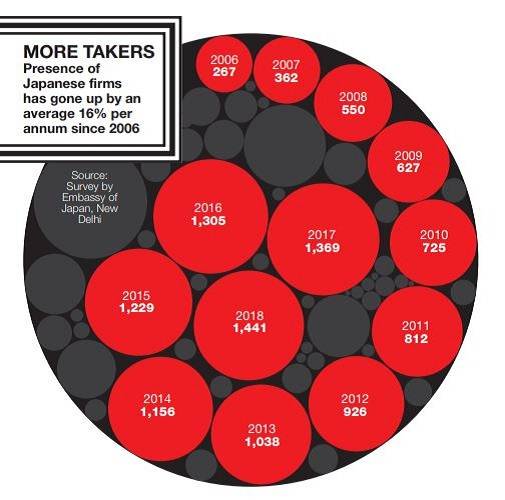 With its young demography and rising per capita income, India's high potential domestic market is a strong magnet.

"It is only fitting that the two nations strengthen their strategic partnerships as India accelerates its digital transformation journey," says Manish Sharma, President and CEO, Panasonic India and South Asia. "Organisations globally acknowledge the fact that it is imperative for them to not only have strategic interests in the country but also position India as a major growth driver for them."

India's consumer landscape has evolved over the last few years. "With Japan having pioneered latest innovations and technological advancements, Japanese organisations stand to benefit greatly by having India as their growth driver," says Sharma.

However, as in most businesses, not everything has been silky smooth. In the pharmaceutical industry, for example, some early Japanese joint ventures and acquisitions in India - Daiichi Sankyo-Ranbaxy, Mitsui-Arch, Otsuka-Mitsui-Claris - faced headwinds. But there are growing examples of successes too.

Otsuka-Dhanuka is a collaboration that has withstood the test of time. Otsuka Pharmaceutical, which first entered into a JV with Dhanuka in 2005 and began production with Japanese technology in 2008, has now increased its stake in Dhanuka Laboratories. Similarly, Rohto Pharma, a major Japanese manufacturer of OTC products, recently invested $5 million in SastaSunder.com, a Kolkata-based e-market for pharma products. Omron Healthcare, a prominent medical device manufacturer from Japan, generated Rs 130 crore revenue from its India business in 2017/18.

"One reason why Japan is betting on Indian pharma companies is that these companies have strong cash flows, low leverage and high debt capacity for medium to large sized acquisitions," says Gurpreet Sandhu, Managing Director, Reva Pharma, and President, Council for Healthcare and Pharma. "We see the Indo-Japan pharma and medical device industries collaborating further," he adds.

Among new sectors, gaming and entertainment are seeing interest. Kawamura's AET Fund, for example, is actively scouting for collaborations and investments in this area. AET is a venture capital fund established by Japan's highly regarded gaming company Akatsuki Inc, which actively invests in all new forms of entertainment technology, content and service start-ups that use augmented reality, virtual reality and mixed reality.

"We see a lot of areas that we can collaborate in, especially in the sectors that we look to fund, like expertise on gaming, content creation and animation," says Kawamura "I feel that in India there is not much of entertainment to consume during weekends, like karaoke box. There is a huge gap between India and what is happening in the entertainment sector in the US, Japan or China."

There is no fear of a let-up in investments by any of these companies in India. With growth slowing in many of the major economies in the world and the foundation already in place in India, most Japanese companies have prioritised India. "India is priority number one for us worldwide. Our other markets in South Asia, such as Indonesia and Vietnam, are saturating a bit," says Motofumi Shitara, Group chairman, Yamaha Motor India. "India has a huge young population that is aspirational. There is a lot of opportunity for us here."

With inputs from Joe C. Mathew and Rukmini Rao