Britannia Industries MD Vinita Bali recalls the breakthrough moments of her remarkable careers in her own words.
Print Edition: Sep 15, 2013 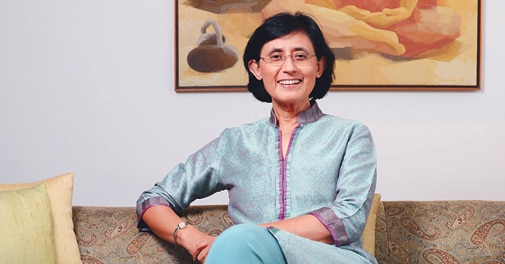 The corporate world happened to me. It was not something I had planned. In fact, as I reflect on where and how I have spent my time in the corporate world, the over-arching theme is one of going with the flow and pursuing a path that was interesting and different, rather than conventional. That has led to my living and working in six countries on five continents, travelling to approximately 45 countries and most importantly, experiencing the richness and diversity of our world - both in its glory and darkness.

Like several of my friends I was keen on joining the Foreign Service after graduating in Economics (Hons) from Lady Shri Ram College, Delhi. But I needed a Master's degree before I could write that exam so I experimented for a week each with both Delhi School of Economics and Jawaharlal Nehru University to do an MA in Economics as I had admission to both. But all of that changed, when, in parallel, I also made it to IIM-Kolkata and the Jamanalal Bajaj Institute of Management Studies, Mumbai. At that point, prompted by a cousin, I thought that living in Mumbai for two years would be fun and that led to JBIMS. The plan still was to write the Foreign Service exam after my MBA.  However, as it happens in all management institutes, I got a job at Voltas even before I completed the course and the rest is history. Voltas gave me a wonderful break - I launched Rasna, the fruit drink concentrate that became an instant success and is still doing well.

After a brief stint with Voltas, I moved to Cadbury where, as a young brand manager, I had the privilege of presenting to the then global Chairman, Sir Adrian Cadbury, on one of his visits to India.  That was a special moment and is forever etched in my memory.  While at Cadbury, I got a fully paid scholarship from the Rotary International in 1982 to study abroad, and jumped at the opportunity. It was a great experience to be a student all over again in the US and I loved the flexibility and eclectic nature of education there. I later did an internship at the United Nations in New York and for the first time perhaps, began to appreciate the vastness of our world as well as the common and uncommon issues countries were trying to address.  I also made friends from around the world and talked to people about their experiences (in Vietnam, South Africa, Cambodia etc.) that I had only read about or seen in films. Soon after, Cadbury offered me a Senior Brand Manager role in the UK, and I launched the first aerated chocolate called "Wispa" which also was an instant success.

At that time (1984/86), it was rare for marketing people to work overseas and I was the first marketing person from Cadbury India to work in the UK. Cadbury was special for another reason in that it gave me the opportunity to work in Nigeria and South Africa where I headed the sales and marketing functions and was also on the boards of those companies in the early nineties. This led to a job with The Coca-Cola Company, where my first role was the World Wide Marketing Director for the most valuable brand in the world - "Coca-Cola".  It was a 'dream come true' for a marketer. My other roles in The Coca-Cola Company were equally exciting and challenging - Vice President, Marketing, for Latin America, Division President of the Andean Division, etc., which meant re-locating to Santiago and learning Spanish. The reason I share my travelogue is because it gave me the unique opportunity to explore different cultures and geographies, to understand diversity, to be adaptable to new environments, people and situations and most of all, to learn to appreciate differences in thought and perspective.

Coming back to India in 2005 for personal reasons brought me to Britannia which has been another unique experience, as the India I came back to, after 16 years of overseas assignments was very different to the India I had left in 1990. The India of 2005 was dynamic and vibrant, confident and full of hope and optimism. All of that has changed considerably in the last eight years too!

The challenges of today are paradoxical. On the one hand the world is more connected in terms of hard ware - through the internet, social media and more people travelling etc., and on the other, there is a great need to connect at an individual level and establish individual identity.  In the midst of economic growth, we have witnessed turbulence and not seen nearly as much human development.   We continue to grapple with problems of increasing income disparity, hunger, poverty, malnutrition, access to education, hygiene and sanitation which are the most basic human needs and rights. The inter-connected world has created high aspirations right across which we are unable to fully harness into positive and thoughtful action so far. Our education in my view will have to deal with these and other aspects.

I also believe that each of us and especially, the privileged among us is responsible for building a good society where there is equity, where rules are transparent and followed, where people feel understood and respected, where there is clarity in terms of governance and dignity of life for all. And, I strongly believe that good business and good society cannot be divorced.
TweetYoutube
Tags: Most Powerful Women in Indian Business | Britannia Industries | Vinita Bali

How Renuka Ramnath made a fresh start after ICICI stint

Most Powerful Women in Indian Business