Cigniti Technologies has developed niche software testing skills, which is driving its growth. 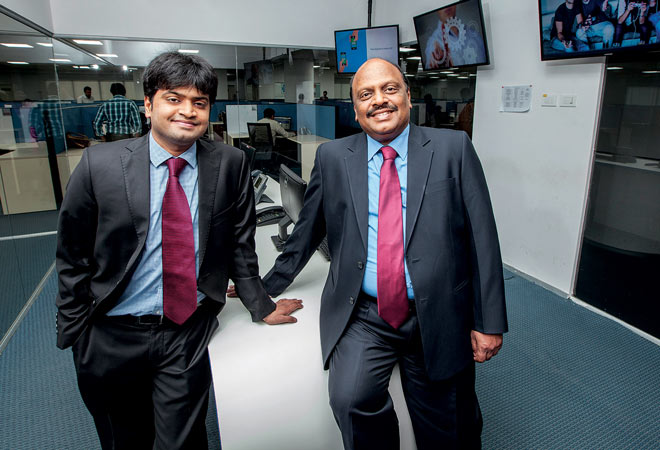 C.V. Subramanyam has an ambitious goal. The founder of Cigniti Technologies aims to increase the software testing company's revenue nearly five-fold to $300 million in 2017/18 from $63 million in 2014/15. The odds are in his favour. For, the company has expanded at a rapid pace over the past few years.

Cigniti's journey began in 1998 when Subramanyam set up Chakkilam Infotech, a generic IT services company. For almost a decade the company remained an also-ran in a sector crowded with IT services providers. It was in 2008 that the company shifted gears. Srikanth Chakkilam, Subramanyam's son, had returned from the US with a masters degree in computer science from University of Southern California. He felt that the future lay in picking niche areas for growth and they decided to become a software testing services company.

KEY FACTS
In 2008/09, the first year as a software testing services company, it posted revenue of around $1 million. By 2010/11, its revenue had inched ahead to $2 million. Realising the need for scale, especially in a space where there are bigger players, in October 2011, Chakkilam Infotech opted for inorganic growth and acquired Cigniti Inc, an $18-million US software testing services and consulting company. Not only was the target company nine times Chakkilam's size, but it also gave the Indian company a foothold in the US market, where it wanted to be. 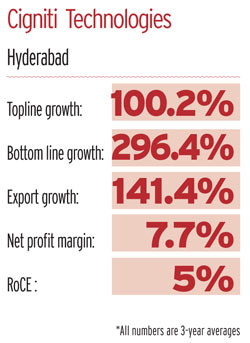 Chakkilam rebranded itself as Cigniti Technologies thereafter, and has not looked back. In 2013, it acquired Gallop Solutions Inc, a US-based specialised software testing services company with revenues of around $9 million. The deal brought along intellectual property since Gallop specialised in building and implementing niche solutions. The two acquisitions have enabled the company to bid for larger projects, says Srikanth Chakkilam, the company's Executive Director. Before the takeovers, the company could bid for orders worth $100,000. Now, it is able to bid for projects worth $1 million or more from Fortune 500 and global 2000 companies, he says. Subramanyam, who is also the company's Chairman and MD, says the company has about 170 clients in 13 countries, including close to 40 from Fortune 500 and global 2000 clients "The strategy now is to get to serve 100 global 2000 clients that have budgets of $2-3 million each for software testing so that we get to $300 million by 2017/18,"he adds.

Over the past three years, says Chakkilam, the company has built strengths in six verticals. These include banking, financial services and insurance (BFSI) industry, airlines, healthcare and life sciences, retail, and technology, which includes online gaming, e-commerce and mobile applications. What makes Cigniti different from other software testing companies? "Here testers are treated as rock stars, which is not the case in large companies," says Chakkilam. He cites the example of Kalyan Rao Konda, who joined Cigniti as head of global delivery after starting out as a tester in AppLabs, a software testing company that got acquired by US-based CSC, and is now heading a business unit in the US with a 12-member sales team reporting to him.

Chakkilam says Cigniti, which has 1,800 people, has added capabilities in each vertical with specialists getting honed at its centres of excellence. Giving an example of insurance, he says: "We need to ensure we have people who know the insurance domain, the testing processes it requires and have a good understanding of the specific tools required there." Subramanyam cites the example of the airlines vertical, where Cigniti is working with several global airlines. "We started out in this space last year with a team of four people. Today, we have close to 200 people in this vertical with this business contributing around 15 per cent to our total revenues."

Cigniti's clients, too, vouch for the company. "Their biggest selling factor is that they have niche skills in testing and that to me is where the value driver lies," says Imraan Kadir, Executive Vice President at MultiChoice, a leading South Africa-based pay-TV company. MultiChoice has been working with Cigniti since December last year. On why MultiChoice chose Cigniti and not a bigger company in the testing space, Kadir says, "It is because of the relationship we have developed from day one, which is not of a vendor and a client but of collaborations and that is something you seldom find in large corporations."

Cochin Airport has raised the bar for others