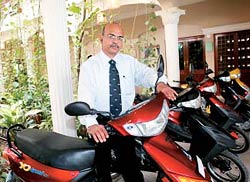 Mukesh Bhandari
Soaring crude oil prices has everyone sweating, but not Mukesh Bhandari. In fact, the Chairman of Electrotherm India (EIL) can’t stop grinning. Reason: his Ahmedabadbased company manufactures electric and hybrid vehicles and, needless to say, it expects sales to surge as fuel prices shoot up. “Since the launch in February 2006, we have sold 50,000 YObykes across the country. We are looking to sell 2.5 lakh over the next 4-5 years,” says Bhandari. In anticipation of the boom, Electrotherm is planning to add more assembly lines (it already has three assembly lines) at its existing plant at Kutch. It also plans to expand its dealership network from 200 to 300 within the next couple of months. Apart from electric scooters, Electrotherm makes induction furnaces and steel, and has invested Rs 514 crore in a steel plant at Samkhyali in Kutch. In 2007-08, EIL clocked revenues of Rs 1,333 crore, up 83 per cent from Rs 730 crore the previous year, and net profit of Rs 62.1 crore—up 44 per cent. “This year we hope to do Rs 2,200 crore in sales,” says Bhandari without batting an eyelid. The Kashyap brothers
The break-neck pace of growth in India’s real estate market may be slowing down, but Vineet Kashyap remains as sanguine as ever. Two reasons for it: One, there aren’t too many organised sector contractors like his firm, BL Kashyap & Sons (BLK), in the business and, two, his firm’s exposure to residential projects is limited. Three-fourths of BLK’s orders are for commercial buildings, 15 per cent for industrial buildings, and the rest for residences. “We are currently executing real estate development projects spanning 11.8 million sq. ft in Bangalore, Pune, Amritsar and Bikaner,” says Kashyap, Managing Director and middle of the three brothers who run the firm. At present, the firm focusses on northern and southern markets, but is gradually spreading its wings to other markets. But instead of merely chasing an increasing volume of work, BLK is trying to get more value out of the work it does. How? By offering add-ons such as furnishing and electro-mechanical works. For furnishing, it already has a subsidiary called BLK Lifestyle, while another subsidiary Soul Space Projects does real estate development. “This strategy (of offering add-on services) will prove to be value accretive in the long run, thereby helping the company emerge as an integrated construction solutions provider,” says Kashyap. When the numbers are tallied up for 2007-08, Kashyap says, BLK is likely to touch a top line of Rs 1,550 crore (against Rs 806 crore the year before), going up to Rs 2,300 crore by March 2009. “Next, we want to start targeting the hospitality industry,” says Kashyap. Like the buildings it makes, BLK likes to grow vertically. Glenn Saldanha
It isn’t the best of times for Indian pharma, but not if you were Glenn Saldanha. The 38-yearold has the pedal to the floor at his Mumbai based Glenmark Pharmaceuticals. “We have been recording almost 50 per cent year-on-year growth in revenues for the past few years,” says the Managing Director and CEO. Saldanha, whose father Gracias Saldanha founded the company in 1977, isn’t exaggerating. Glenmark has grown at a CAGR in excess of 31 per cent over the past three years (2004-07) against the industry average of 22 per cent. What does Saldanha, an MBA from NYU’s Leonard Stern School of Business, know that CEOs of other pharma companies in India don’t? Saldanha has been instrumental in transforming Glenmark from an India-focussed formulations maker in 1999 to a global firm with presence in drug discovery as well. Glenmark is now among the few Indian firms with a successful drug discovery programme. According to a report by Manoj Garg, a research analyst with Emkay Research: “Strong productive R&D presence in the US generic market and consistent out performance in the domestic formulations market have made Glemark Pharma a cut above the rest.” Glenmark’s revenues and net profit, at Rs 1,392.7 crore and Rs 389 crore, respectively, were up 72 per cent and 188 per cent over 2006-07. Its market cap of Rs 15,479.20 crore (as on May 22) makes it the fourth most valuable pharma company in India. “As a firm we will continue to maintain these growth rates in the years to come and we will try and achieve it both organically and inorganically,” says Saldanha. While he won’t say which markets he is looking at, Saldanha says he’s open to looking at opportunities in key markets and beefing up Glenmark’s drug discovery business. 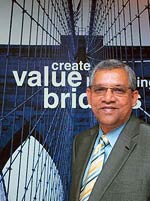 Jeya Kumar
Two years after it was acquired by technology servIces giant EDS, MphasiS, the Bangalore-based IT services company is back in the spotlight. This time because its one-time parent has itself been acquired by HP in a $13.9-billion deal in mid-May this year. So, if Jeya Kumar, MphasiS’ recently appointed CEO, had his hands full managing the previous integration, his job has got even more complicated with the latest merger. MphasiS has been on a fast growth track, growing its top line by 38 per cent and earnings by 42 per cent in the last fiscal and adding over 10,000 people in the process.

Despite these seemingly impressive numbers (and a place on this listing), Kumar, who ran Sun Microsystems’ global services operations earlier, knows that there is scope for improvement. “We want to focus on our operational cadence; specific areas such as margins need to improve,” he admits. For a company with over 28,000 people, MphasiS has very low operating margins (just 9.9 per cent for the last quarter of the previous fiscal, down from 13.3 per cent in the corresponding period the year before) and Kumar will have his task cut out improving this metric. His plan: focus on streamlining suppliers from over 3,000 at one time to just 1,000 now and eventually just to 300; then, to rationalise his global presence from over 30 locations to 20, but simultaneously open new ones in low-cost locations such as the Philippines. Before he can do that his bosses in Plano, Texas (EDS) and Palo Alto, California (HP) will have to figure out how to fit this fastgrowing business into their global game plan. Sanjay Agarwal
Mustard oil has been the strength of KS Oils for a curious reason. Because of the form in which it’s consumed in India, mustard oil is still made the old way—selecting the right seeds and then putting them through the kachi ghani press in kohllu. That’s also part of the reason why MNCs in the FMCG space have not been able to enter the mustard oil market even as they expand their presence in the overall edible oil market. “We are the largest processor of mustard/rapeseed in India and enjoy 7 per cent of the Rs 14,000 crore mustard oil market,” says Sanjay Agarwal, CEO of KS Oils, which is promoted by the Garg family of Morena (Madhya Pradesh). In 2007-08, the company reported net sales of Rs 2,041.07 crore, a 90.66 per cent growth over the previous year, and a net profit of Rs 122.04 crores, a 112 per cent growth. In a bid to attain market leadership, Agarwal plans to triple manufacturing capacity by March next year. No slippery road for KS Oils, did you say?